In the aftermath of the Charlie Hebdo shootings, hostage takings and a four-million strong ‘unity’ march, considering this latest Islamist outrage in isolation is a deceptively easy trap to fall into.

Bertrand Nzohabonayo barely made a ripple in the mainstream media when he stormed a small police station in Tours, France with a knife and screamed “Allahu Akbar” last month, badly injuring three police officers before being shot dead. Although the Burundian-born French citizen was known to police for petty criminality, security services had never considered him a terror threat – despite his brother being on a terrorism watchlist.

Although the French prosecutor said it would ‘probe’ whether Nzohabonayo had “followed orders, or whether it was a mindless action”, the Islamic State moved quickly to issue a statement congratulating him for “answering the call to action”, reports an American terror-monitoring group. 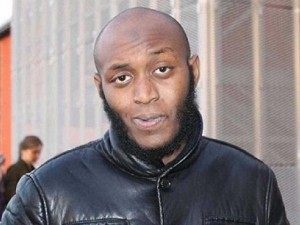 Bertrand Nzohabonayo, 20, who was shot dead after attempting to murder three policemen, one of whom he slashed to the face, barely missing his jugular.

Terror struck again the next day, and just a month after jihadists fighting with the Islamic State released a French-language propaganda video titled “What Are You Waiting For?” goading would-be Islamic terrorists into action at home.

Apparently following the video’s clear instructions to “kill them and spit in their faces and run over them with your cars”, a Renault Clio was repeatedly rammed into groups of pedestrians in an attack that continued a remarkable thirty minutes.

Thirteen were injured, with at least two put into “very serious condition” as the driver shouted “Allahu Akbar” and “for the children of Palestine!” while ploughing his vehicle into people walking on the pavement. One of the victims was just eleven years old.

At the time police had been unable to decide whether the attack constituted an ‘act of terrorism’. 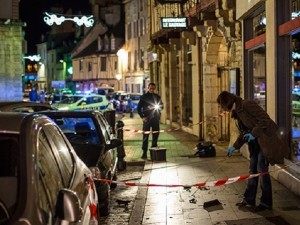 Despite a policeman who witnessed the attack telling media the driver had shouted “Allahu Akbar”, French authorities wasted no time in ruling out terrorism as a possible cause after the second vehicle crashed into crowds in two days.

One died, and eleven were injured as they enjoyed mulled wine at a bar in a Christmas market in the Nantes, France as a white minivan was driven into them. As the vehicle came to a rest the driver began to stab himself repeatedly in a failed attempt to commit suicide.

Despite clear similarities to the previous day, French police insisted the perpetrator was a known mental-health patient. They said: “We cannot speak of a terrorist act”, evidence suggests it was an “isolated case”. Regardless, 300 police were deployed to the streets of France after the ‘event’ – just in case. 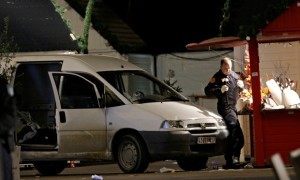 The mulled wine stand where one died and eleven were injured, five seriously, after being hit by a speeding van. Stephane Mahe/Reuters 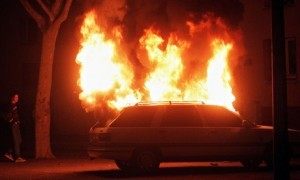 The burnings are most prevalent in France’s ‘Sensitive Urban Zones’ (ZUS), officially areas designated by the government as in need of ‘special’ policing and spending programmes, but better known among ordinary Frenchmen as banlieues, (ghettos) or ‘no-go zones’ where even the police care not tread.

Car burnings as a sign of protest are now so common in France many insurance policies in the country won’t even cover an owner against the damage. In just one 2005 riot, 10,000 cars were burned.

Unfortunately the lower number of cars torched this new year’s eve was down to an unprecedented police and army presence on the streets, rather than improved community relations, with over 90,000 members of the emergency services deployed. The interior ministry called this a “substantial, active and dissuasive mobilisation of the security forces”.

This year there were reports of youths screaming “Allahu Akbar” as they pelted vehicles with petrol bombs around the high-rise estates. 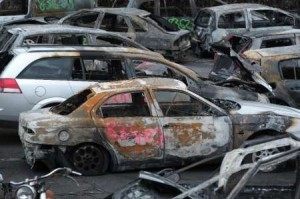 Despite the sheer volume of destruction, a government spokesman said “There was not a single major incident”, and that the vandalism was merely down to “binge drinking”.

With sudden clarity the world turns with shock to face France, as if up until this point the country had been a paragon of peace and harmony. After gunmen shouting the now-familiar phrase and “we have avenged the prophet” murdered twelve journalists, cartoonists, and police officers in cold blood with AK-47 assault rifles the knives immediately came out in an almost spectacular bout of victim blaming.

The Financial Times’ Europe Editor Tony Barber kicked off proceedings, writing that as the attackers were then unidentified, people should not leap to conclusions, helpfully reminding readers the cause could be far-right terrorism.

Remarking the attack “will not surprise anyone familiar with the rising tensions among France’s 5 [million] or more Muslim citizens”, Barber helpfully suggested “some common sense would be useful at publications such as Charlie Hebdo”, which had a history, he said of “mocking, baiting and needling Muslims”. 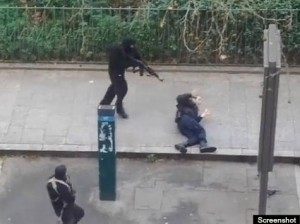 Barber said: “This is not in the slightest to condone the murderers, who must be caught and punished, or to suggest that freedom of expression should not extend to satirical portrayals of religion. It is merely to say that some common sense would be useful at publications such as Charlie Hebdo, and Denmark’s Jyllands-Posten, which purport to strike a blow for freedom when they provoke Muslims, but are actually just being stupid”. 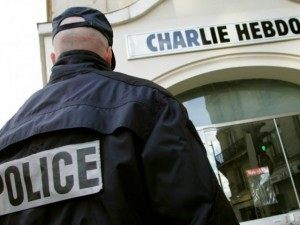 French Police Outside the Headquarters of Charlie Hebdo. Their Headquarters Had Already Been Firebombed in 2011 After They Published Cartoons of Mohammed.

French police initially denied there was any link between the murder of a woman police officer on Thursday and the Charlie Hebdo attack. Meanwhile the world of the mainstream media was going into meltdown over the Cartoons depicting the Islamic prophet, Mohammed which has got the editorial staff of Charlie Hebdo murdered in the first place.

Despite an apparently clear public interest case for printing the cartoons in Thursday’s newspapers, most European titles did not, with many editors citing fears for their staff, ‘good taste’, and ‘good manners’ as reasons for censoring images, or not even publishing them at all. 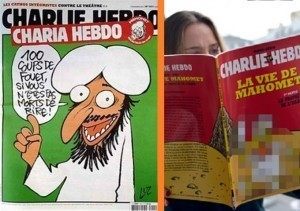 How the Daily Telegraph depicted a past edition of Charlie Hebdo (R), contrasted with the 2011 ‘Sharia Hebdo’ special edition as republished by Breitbart News (L).

Despite vows that ‘we’ would never be defeated by Terrorism, no British newspapers published images that could be deemed insensitive to Muslims the morning after the attack. A number of newspapers on the continent were more brave in this regard, and one so far has had its offices burned down for its troubles. Another has received bomb threats.

Even before the start of two simultaneous sieges, nearly 90,000 police officers are now on the streets of France, desperately searching for three (and later, including Coulibaly’s gun toting common-law wife, four) terrorists, a number that rises when deployed soldiers and co-opted firemen are included. 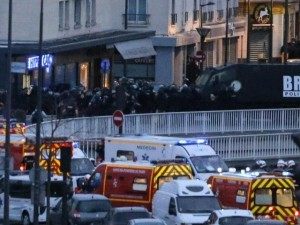 The number of armed police on patrol simultaneously was so high, only a limited number could be issued with the modern, standard-issue FAMAS G-2 assault rifle normally used by the French police. Many were photographed during the day with World War Two-vintage carbine rifles instead, in stark contrast with the modern assault vests and combat boots of the officers carrying them.

After the death of four Jewish hostages in the siege of a Kosher supermarket in east Paris, global focus turns to the comments of the editor of the Jewish Chronicle, who claimed “Every single French Jew I know has either left or is actively working out how to leave.

“So, it’s a fluke that the latest target is a kosher grocer, is it?

“What’s going on in France – outrages that have been getting worse for years – put our antisemitism problems in perspective”.

As the siege progressed Jewish businesses and shops closed across France early, as business owners feared for their lives. Still now, hundreds of French police are still on patrol outside Jewish schools, homes and businesses.

That Jews are leaving France in droves shouldn’t be news to anyone – it has been going on for years with the rise of what is euphemistically called the “new anti-Semitism”. Indeed, the population is in freefall as thousands choose Israel over the uncertainty and danger of France.

France’s traditionalist national conservative party the National Front, which once struggled with a reputation for anti-Semitism, is even now picking up growing support from the Jewish community because of its hard-line stance against Islamism and Multiculturalism.

Jews have become prime targets for theft in Paris for their perceived wealth. Breitbart London reported last year on a case where a gang of four “African” men burst into the apartment of a young Jewish couple, shouting “You must have cash here because you are Jews”. Armed with a pistol and a sawn-off shotgun, the men tied up the man they found in the apartment, and gang-raped his 19 year-old girlfriend.

Now, France hopes, the horror is over and the healing can begin. That was the idea behind the four-million man march that took place in cities all over France, and the wider world yesterday. A broad variety of national leaders attended, with British prime minister David Cameron linking arms with Israeli counterpart Benjamin Netanyahu and French president Francois Hollande.

Also invited were leaders of France’s political parties, walking together to show unity against terrorism and to stand in solidarity with the slain. All except the leader of the Front National – Marine Le Pen – who  remarked “I was ready to participate and I was very sincere about my desire to pay homage [to the victims]… regrettably, all is clear now”.

“Things are clear. They are saying ‘the FN is not welcome”.

The Front National came first in last year’s significant Euro elections, taking a quarter of the vote and 24 seats. Despite comparatively poor performance in national elections in the past, some observers have suggested the party has now turned a corner and recent polls show Marine Le Pen to be a favourite as the next President of the French republic.

The FN is the only major party in France that challenges the established status quo around mass immigration, multiculturalism, and membership of the troubled Euro. After the attacks last week, Le Pen restated her commitment to giving the French people a referendum on the death penalty.