Nigel Farage has demanded Jean-Claude Juncker “wind his neck in” after the European Commission President claimed British people had no desire to leave the EU. President Juncker’s comments came in the German Newspaper, Süd Deutschezeitung, and is his latest intervention in the referendum debate.

He told the paper: “Brexit is also a question that will realisticly arise, it is not desired by the British. Cameron himself wants to dock his country permanently to Europe.” 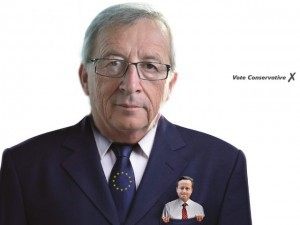 Wind your neck in, Farage says Juncker should stay out of EU debate.

Farage hit back saying: “The British people are fed up to the back teeth with Eurocrats telling us what we want, what is good for us, how to run our businesses and how we organise our society.

“Now he tells us we do not want to run our own lives. Of course this man, elected from a short-list of one, with no popular democratic mandate and no means of accountability wants to maintain the control of the unelected unwanted Eurocrats. Well he would, wouldn’t he?

“Mr Juncker should wind his neck in about what the British people want or do not want, he does not know us. However, as someone who regularly talks with David Cameron, he does seem to have some insight into the Prime Minister’s mind.”

In the interview Juncker also explained why he believed Greece should remain in the Euro. The President said that whilst Greece had elected a left-wing government under AlexisTsipras it should not necessarily be listened to.

He continued: “This is not about ideology. I say to Mr Tsipras repeatedly: We have had an election in Greece, but there are 19 democracies in the euro zone. An election result is to take note of.” Juncker went on to say the “sensitivities” of other countries must be respected.