Sweden can be proud today to have shed its long standing reputation as ‘the most boring country in the world’. The Nordic state finds itself in the grip of a terrifying crime wave instead, which even ‘new Swedes’ describe as like “being back in Syria”.

Grenade attacks in multicultural paradise Malmö are now so commonplace the English-speaking media has all but stopped bothering to report them. Compounding the apparent disinterest in the descent of beautiful, historic Malmö into a third-world ghetto where native Swedes are very nearly in the minority, is a striking dearth of facts about what is actually going on there. 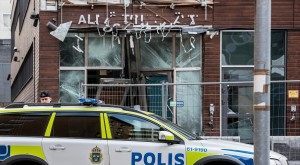 Malmö police station and court after a bomb attack in December

We know the grenade attacks are a regular occurrence – there have been four this past week and at least ten since April. They come in addition to the regular shootings, stabbings, and arson attacks that are apparently so commonplace they don’t make the English papers at all.

A recent assessment by Malmö police into the effectiveness of their own violence-reduction programme was that it had no effect, and that “the number of shootings and bombings in Malmö have not declined despite the measures”.

The force today admitted it is severely under-staffed and unable to cope with the volume of investigations under-way. One third of all officers on the local force are now ‘on leave’, and no doubt the strain of the job in ‘Sweden’s Chicago’ is playing a part in that.

But there are scant few assessments by the Malmö police over who is deliberately targeting government buildings with hand grenades smuggled from the Balkans. The Swedish press reports no arrests. The closest to publicly expressed logic for the attacks is the suggestion that friends of three young men who set off a series of bombs in the city on Christmas Eve are now expressing their displeasure at the justice system, as all three were later jailed.

Benefiting from their youth – one was just 15 at the time of his arrest – the bombers have not been named, denying the public another crucial piece of the puzzle. Yet speculating that Malmö’s new-found crime problem may have anything to do with the sudden rush of immigration is verboten.

Don’t be fooled, for all its friendly press the Swedish orthodoxy is one of the most suffocating, and strongly upheld belief systems in the world. Until very recently, even questioning the doctrine of mass immigration would lead to total social exclusion. 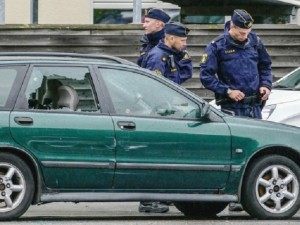 Car windows broken by the blast of a grenade this weekend

Yet despite this, the tide is turning – slowly.

A number of shocking recent cases in Malmö and elsewhere go some way to explain the sudden and silent rise of Sweden’s new right-wing. The abduction and week-long gang rape ordeal of a young Swedish woman by a gang of Afghan men – who couldn’t even speak Swedish – should be enough to challenge the preconceptions of even the most dedicated multiculturalist.

If an overriding desire to care for persecuted immigrant communities is your thing, perhaps the needless abuse and persecution of Syrian Christians by Syrian Muslims after establishing themselves in Sweden could trigger a re-assessment of your political priorities.

This months a group of two Syrian Christian immigrant families were forced out of their Swedish asylum accommodation by Muslim residents. They were told they were not allowed to wear Christian symbols or even to use the communal areas when Muslims were present.

Instead of reporting the incident to the police, the Swedish immigration authority decided to deal with what they acknowledged were “fundamentalist Muslims” in-house, sending ministry officials to meet with the Muslim families at the asylum centre to explain to them the fine points of Swedish law, hoping they would not transgress again.

A growing number of Swedes are starting to reject this way of doing things. Ashamed that ‘boring’ Sweden now has one of the highest rape rates in Europe and a growing teenage gang-rape problem, ashamed that they pay 60-per-cent income tax yet newcomers are showered with freebies, they look for an alternative.

The Sweden Democrats (Sverigedemokraterna, SD), the socially conservative anti-immigration party who campaign on the slogan ‘Keep Sweden Swedish’ continues to go from strength to strength. It now enjoys poll ratings that put it in place to become the nation’s third party. As is the case with other anti-immigration parties across Europe, SD enjoys its strongest support in areas with high levels of immigration, in this case in the more urban south.

The party polls consistently well in Malmö, suggesting those Swedes who still live there are desperate for change. The experience of Nordic sister Denmark suggests there is hope for the future.

After winning the most members of parliament in the June general election, the Sweden Democrat-like Danish People’s Party (Dansk Folkpartei, DF) is now clearly setting the national agenda despite sitting on the fringes of the now ruling centre-right ‘blue’ coalition. Only weeks after the electoral dust settled, the real optimism of a nation which is suddenly seeing real change is clearly apparent. 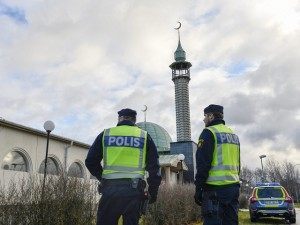 Swedish police patrol by a Mosque near Stockholm, the capital city / Getty

Just a fortnight after the election, Denmark cancelled unemployment benefits for migrants. Instead, they could receive a new ‘integration benefit’ worth half as much as the old unemployment money – and would only be eligible to claim the new full amount if they learnt Danish.

Following up on the move, the Danish government announced last week that this change in money available to newcomers would be ‘advertised’ in the newspapers of countries like Turkey, to make sure those considering making the journey across Europe to Denmark knew not to bother.

The Swedish are learning from their Danish counterparts, and are adopting the same tactics. As the Danes did in 2011, the Swedish right-wing has taken on the nose the recent ‘victory’ by the left-wing in the 2010 elections.

They can stand confident knowing the left-wing Social Democrats, for whom support is falling, have been forced into leading a weak minority government while support for the new right-wing party is surging. And just like in Denmark, come the next election they will be perfectly placed to make the difference their country needs.