Over the course of this weekend we have heard no end of left-wing politicians and media commentators taking to the airwaves to claim that the British public overwhelmingly support Britain accepting more migrants into the United Kingdom. But frankly, the polling just doesn’t reflect this. BBC anchors, Channel 4 hosts, Labour politicians and even foreign political commentators are claiming that Britons are amenable to the idea of more refugees.

Last Friday, Channel 4’s Krishnan Guru-Murthy asked me if “my side” of the debate was just being “nasty”, as lefties Caitlin Moran and Hella Pick enjoyed some glorious PR coverage for their campaign to open the borders to more migrants. The BBC’s Stephen Nolan harangued his guests for suggesting they weren’t in favour of the government plans.

This weekend, a Labour MP said Britain should take more migrants even if hospital waiting lists increased, taxes went up, cities overflowed, and school class sizes went through the roof. She said we should accept people until we are “saturated”.

But the polling figures simply don’t reflect these points. The fact is the media, as well as our politicians, are lying to you.

“Quelle surprise, Raheem!” you say. But there is scant fair reporting from the other side of this debate, which is why I believe it is so important to make sure “my side” has the facts to hand, and shares them with everyone they know. Here they are. (And while Yvette Cooper’s numbers didn’t make sense, I’ve conservatively assumed the average size of a Syrian family to be 5 people). 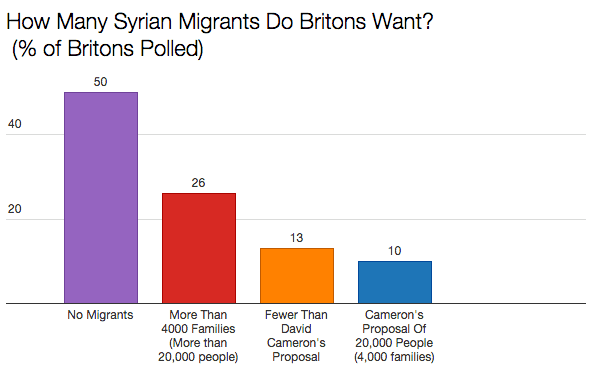 A YouGov poll for which the fieldwork was conducted just over a week ago asked 1500+ Britons what they thought of the migrant crisis and the government handling of it. The poll revealed the following:

1. 52 per cent of people support Britain taking a military role in bringing an end to the war in Syria;

4. While 36 per cent think “Britain should admit higher numbers” of Syrian migrants, 51 per cent want the numbers to be the same as previous years, lower, or none at all;

5. Twenty eight per cent of people think Britain should take more Libyans, Iraqis and Eritreans, but 60 per cent believe the numbers shouldn’t change, or should be lower, or none at all;

6. Just 5 per cent support taking economic migrants, while 83 per cent think we shouldn’t raise the numbers, or should take fewer or none at all;

And here are the REALLY juicy stats:

7. Fifty per cent (that’s right) said they want NO Syrian “refugee” families coming into this country. Thirteen per cent said they want between 1 and 1000, 10 per cent said between 1001 and 5000, with 9 per cent saying between 5001 and 10,000 and another 9 per cent wanting between 10,001 and 50,000 and 8 per cent want above 50,001. That means the plurality of people want no Syrian refugees. The “more” camp, divide in itself over how many to take, are in the minority. That blows the Los Angeles Times out of the water. No wonder Ms. Boyle didn’t link to a source for her assertion.

I would have thought these numbers made it pretty self-evident about where the British public stand on the migrant crisis. But let us see if the media reflect this accurately, or if politicians take heed of what the people who elected them want.