European politicians have slammed the Danish Headmaster’s Association’s announcement to not show Mohammed cartoons in the classroom, a move a coalition of parties has denounced as censorship.

The controversy began after the new Danish schools curriculum called for the 2005 Mohammed cartoons controversy to be taught. Two parties instantly leapt to the defence of the initiative, remarking that not only should that significant episode in Denmark’s history, which saw violent protests worldwide and set in progress a chain of events which led to the Charlie Hebdo terror attack in Paris this year, but that it should be taught with the original source material. 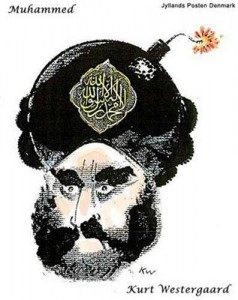 The Danish People’s Party (Dansk Folkpartei, DF) and the Conservative People’s Party (Det Konservative Folkeparti, DKF) have now been joined by the Liberal Alliance (LA) who also support the use of Mohammed cartoons as teaching aids in the classroom. Breitbart London reported in March there was some disagreement between the parties over how exactly the cartoons should be introduced to schools, but this conversation has now been rendered irrelevant as the Danish Headmaster’s association has declared it won’t be allowing them at all.

Danish news site Politiko reports the president of the body said showing cartoons of Mohammed in schools would be “harmful to home-school cooperation if Muslim students feel provoked and offended by seeing the drawings”. But the Conservatives have hit back, accusing the teacher body of “exercising a form of censorship”. They don’t want to make the cartoons mandatory, but to give the individual choice to each teacher whether to use them.

DF spokesman Alex Ahrendtsen vehemently disagreed, remarking it was important to use primary sources such as the cartoons when teaching history in schools, saying: “when you teach the cartoon crisis, you obviously also display the drawings, otherwise they do not understand why there was a crisis”.

In March he was even more forthright, telling press that “If you live in Denmark you should also be able to tolerate seeing the drawings”. Liberal Alliance spokesman Merete Riisager said it is important to teach children that religion and ideologies can be debated and criticised. He said:

“If Christians and Muslims to live together peacefully in Denmark and Europe – and we must – then Muslims also accept liberties, including freedom of expression. This means that religion should be criticized. This applies to Christianity, Islam and all other religions in general. ”

The 2005 Mohammed cartoons controversy was sparked after the Jyllands Posten published a full-page spread of 12 cartoons featuring the Koranic character. Daring to publish his likeness, which is considered deeply offensive in Islam triggered a series of protests worldwide in which Danish and other embassies were burnt during riots and a number of people were killed.