British Prime Minister David Cameron is set to drop his pledge to block migrants from the European Union (EU) claiming in-work benefits, despite polling exclusive to Breitbart London showing it would be the most popular outcome of his EU renegotiation.

A poll by Survation for the campaign group Leave.EU shows that UK voters rank limiting migrant benefits as their number one priority from the list of Mr Cameron’s renegotiation points.

However, The Times says that British officials are planning to drop the demand as it is proving the main obstacle to a deal with EU leaders.

This is apparently confirmed by a European diplomat, who says Mr Cameron has realised the plan “does not fly”.

“The institutions are expecting David Cameron to come with new proposals to the European Council next month. There are possibilities to help but not on the specific point of four years,” the diplomat said. “We understand that UK officials are working on something else.”

The Prime Minister is currently trying to negotiate new terms for Britain’s membership of the EU, before putting the deal to a referendum. However, he has already abandoned some initial pledges, such as exempting Britain from free movement rules.

Now it seems he has also dropped his plan to stop EU migrants claiming benefits while they work, despite criticism that migrants are abusing the system to send UK benefits back to their families in their home countries.

EU leaders are determined to prevent any changes relating to migration and benefits, and it now looks like Mr Cameron will abandon the idea in order to win a deal of some sort.

“There is a willingness to give just enough to win a referendum but not too much,” one diplomat said.

However, if Mr Cameron does drop the proposal it will be a significant blow as polling suggests it was the most popular part of his renegotiation package.

According the Survation poll, 22.1 per cent of respondents said limiting migrants’ access to UK benefits was the outcome they would most like to see in the renegotiations. This was even more popular than restoring full sovereignty to the UK parliament (18.1 per cent) and lowering the cost of EU membership (14.9 per cent). 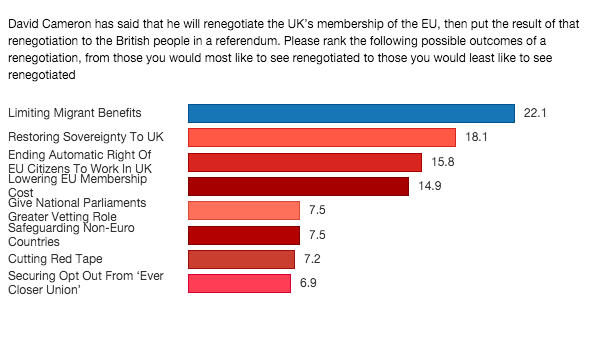 The policy was especially popular among Labour voters as well as voters on lower incomes, people whose support the Prime Minister desperately needs if he is to persuade the British public to back EU membership in the forthcoming referendum.

The issue is also a “red line” for many Eurosceptics in the Prime Minister’s own party who may now be more likely to support Britain leaving the EU.

A Downing Street spokeswoman tried to play down the report, saying: “We are clear that our proposal is to limit in-work benefits to those who have been resident for four or more years and we are discussing with others how we achieve this.”