Bradford, ENGLAND – Around 60 people gathered outside Bradford Town Hall in the driving wind on Saturday afternoon in support of Nissar Hussein, a Christian ex-Muslim who was brutally beaten outside his home by Muslim neighbours in November.

His attackers believe he is a “blasphemer” for leaving Islam. 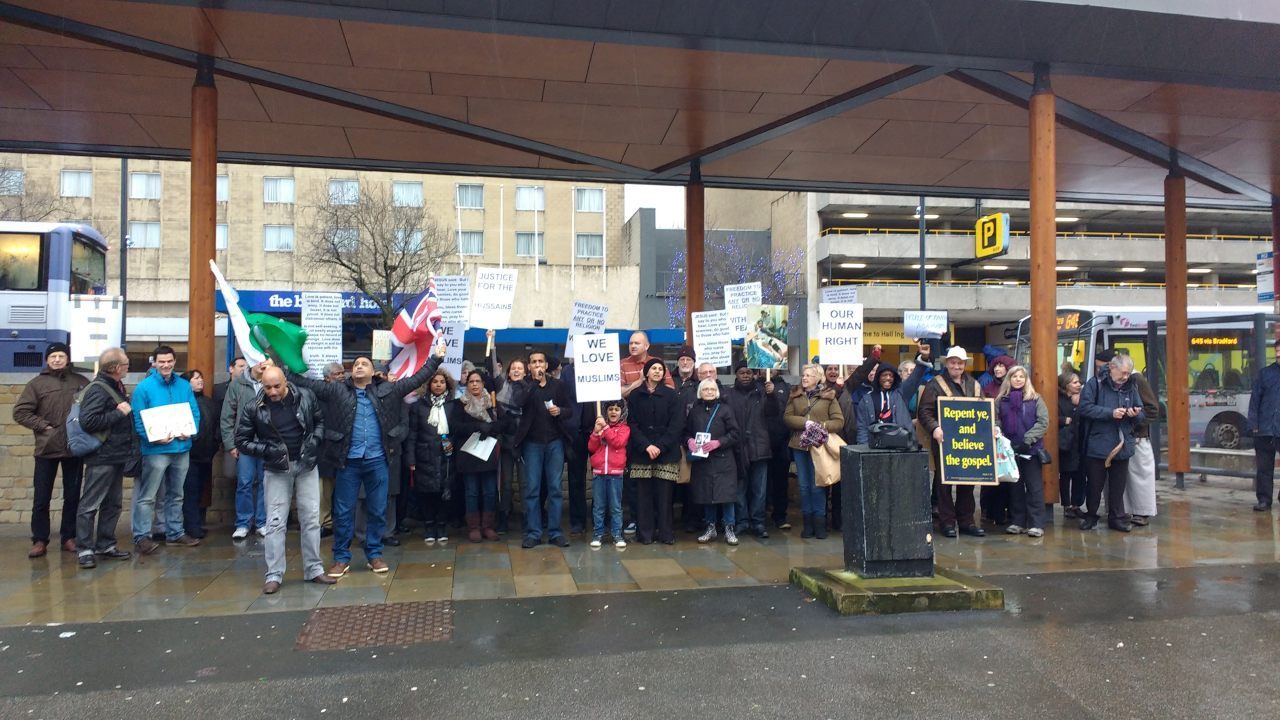 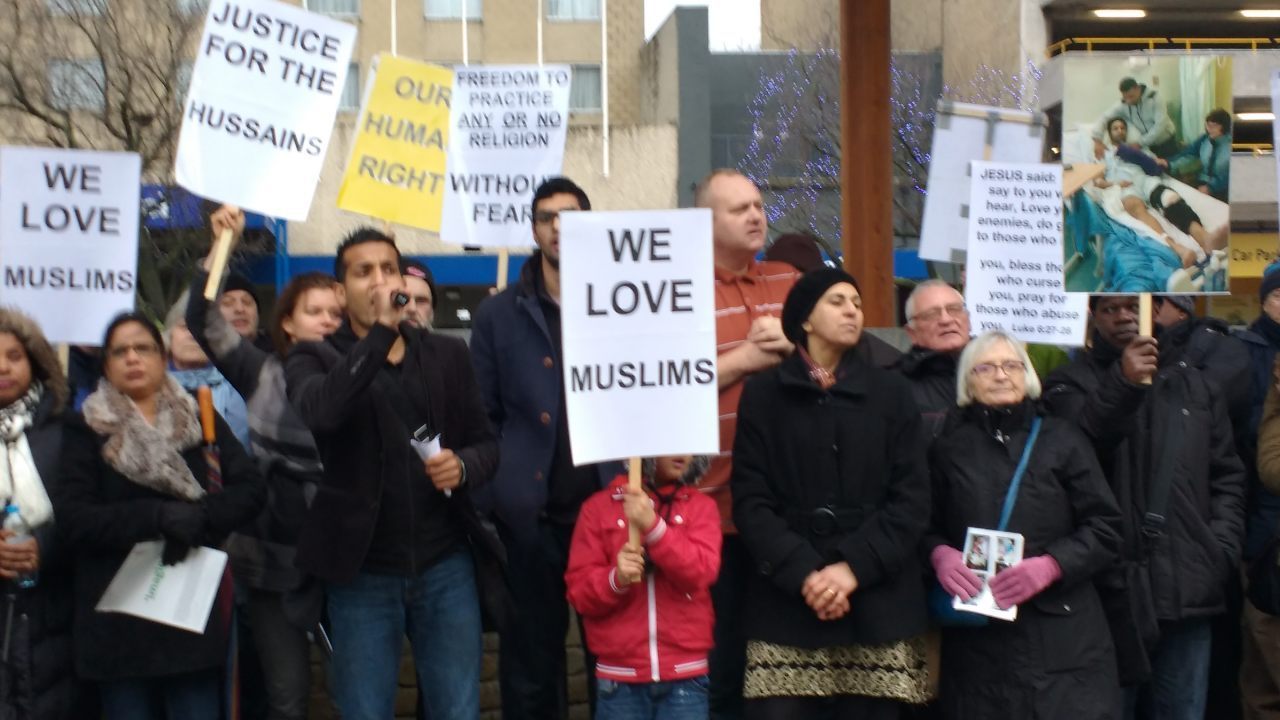 The crowd was addressed by a number of Christian preachers and evangelists, many of whom had traveled from other northern cities. A number of speakers are aware of ex-Muslim Christians who are afraid to speak out about their new faith from fear of persecution. 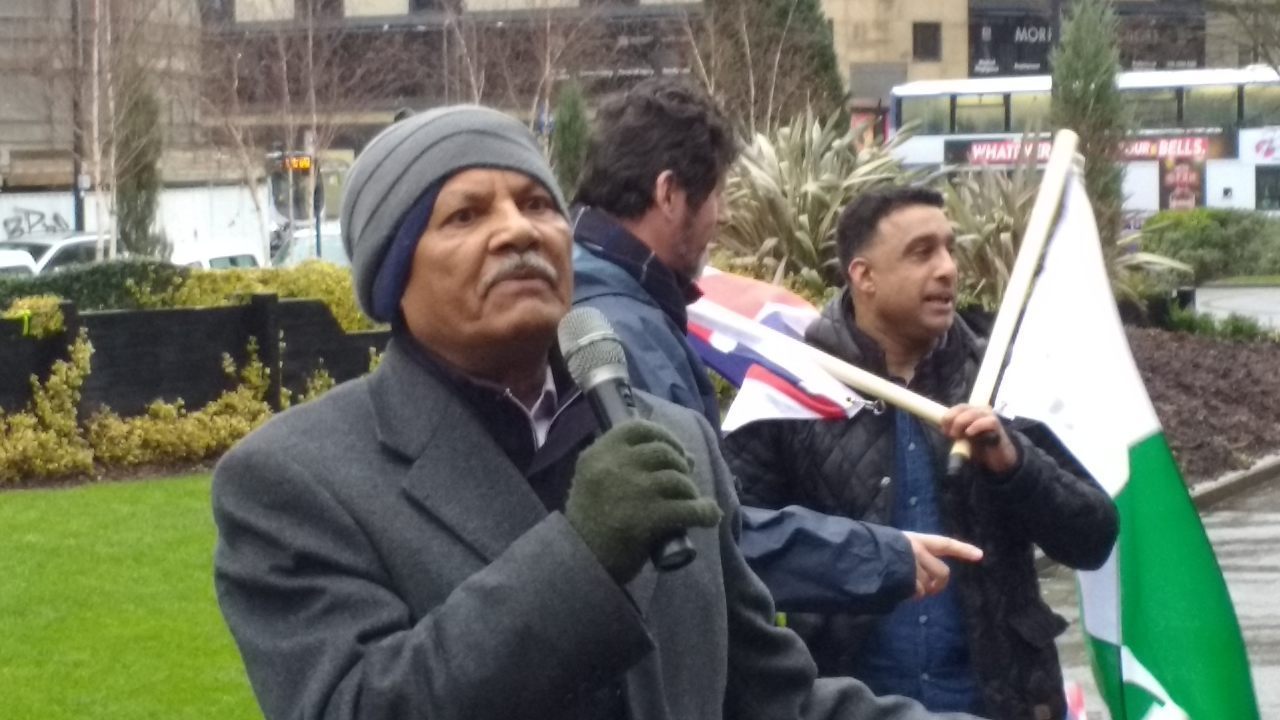 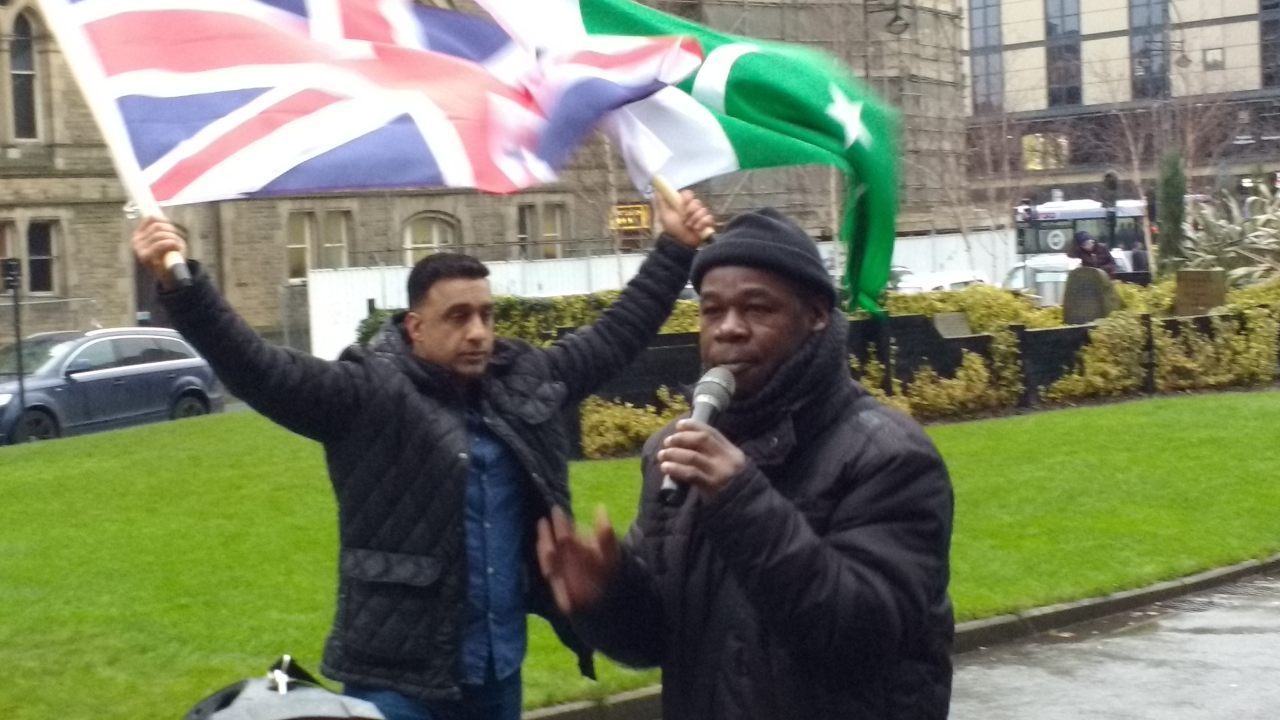 Although the event, organised by the British Pakistani Christian Association was open to people of all faiths and none, the crowd appeared to be exclusively made up of Christians. They joined together in prayer and song, praying especially for Mr Hussein’s wife and two of his six children who were in attendance. 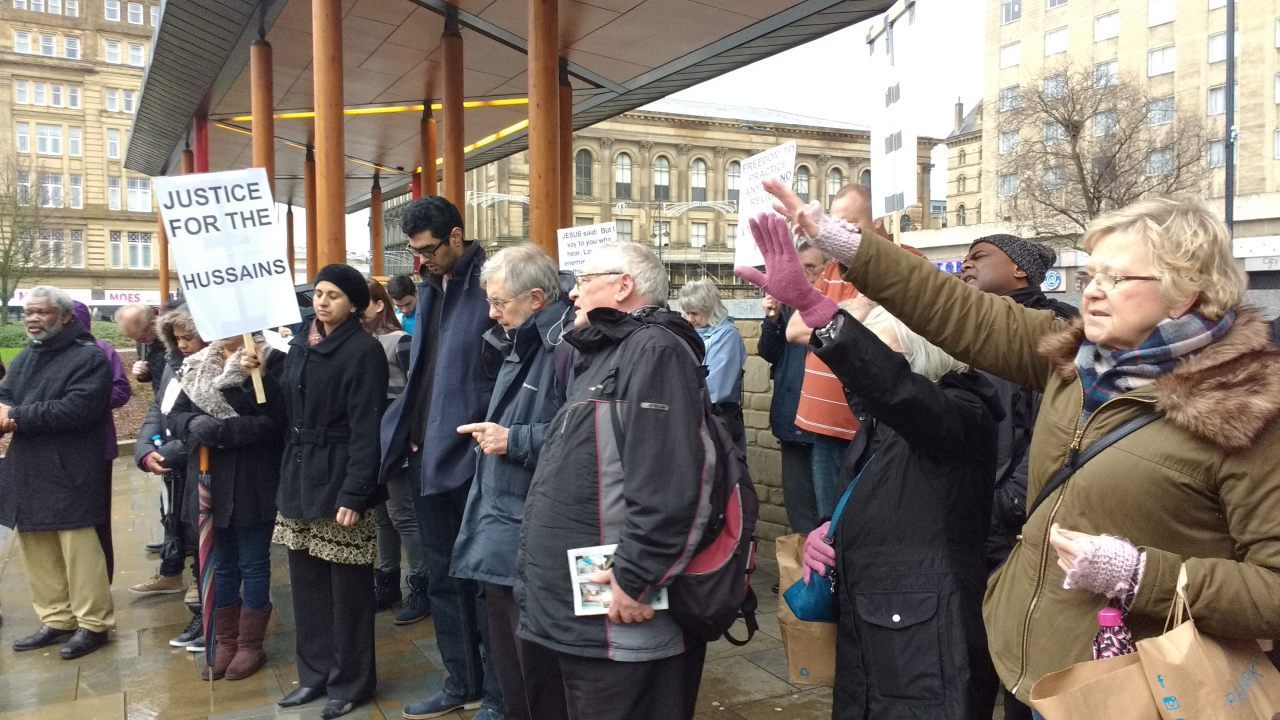 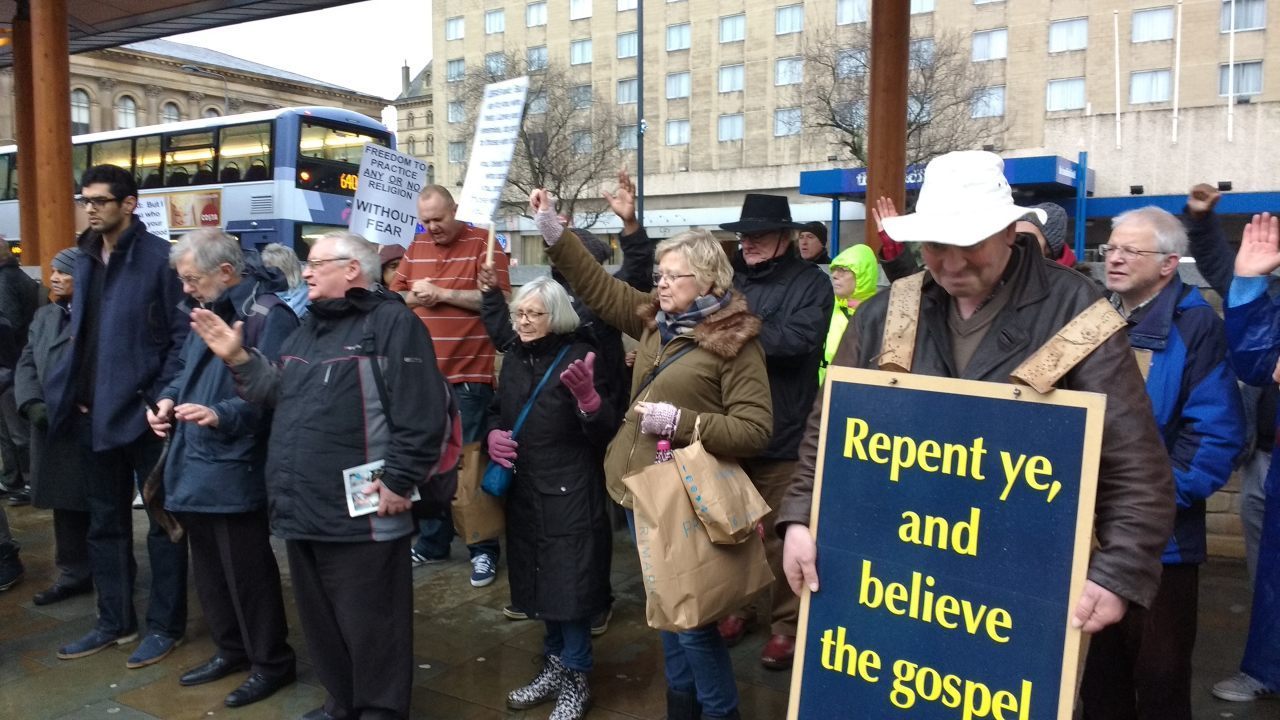 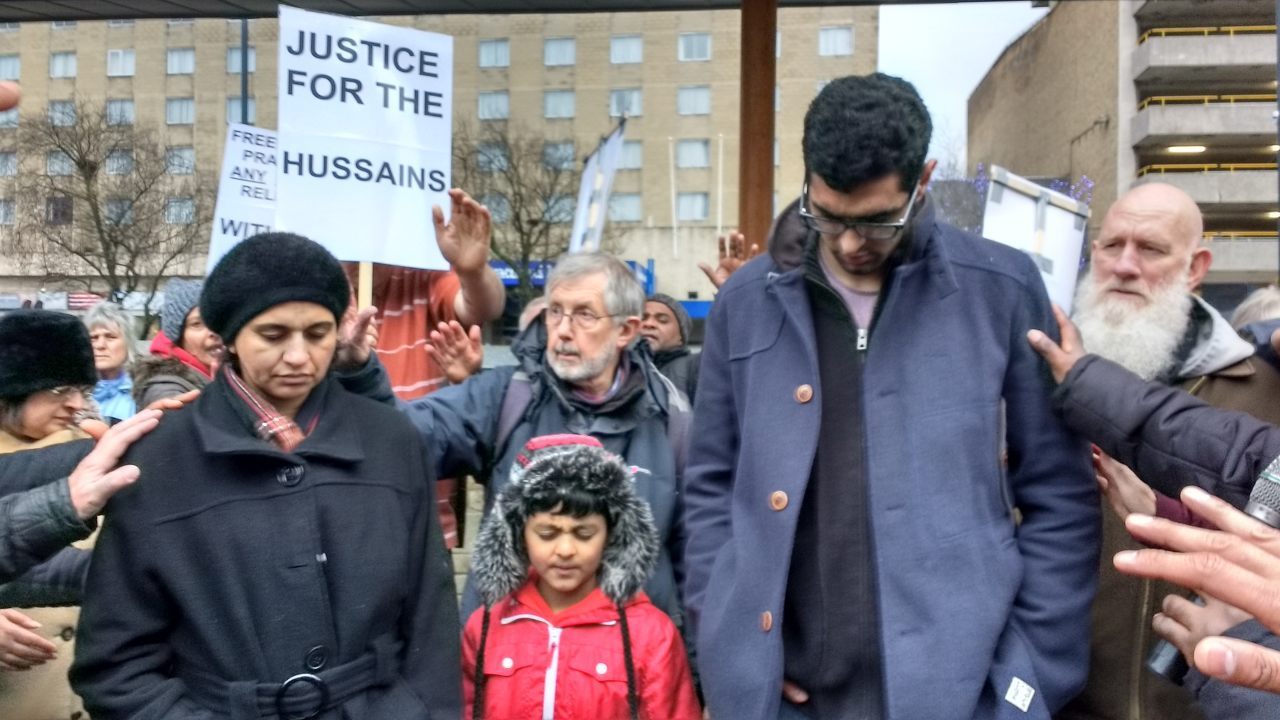 The British Pakistani Association has launched a petition calling on the government to “publicly declare that punishment for ‘apostasy’ is not recognised at all under UK laws and people such as Nissar Hussein from Bradford are completely free to change their religion or faith beliefs.”

They also want the Home Office to conduct a study into the problem of Christian persecution among minority communities in the UK so that the full picture can be understood, and for a review of existing police and local authority policies, procedures and officers’ training in regards to victims of apostasy. 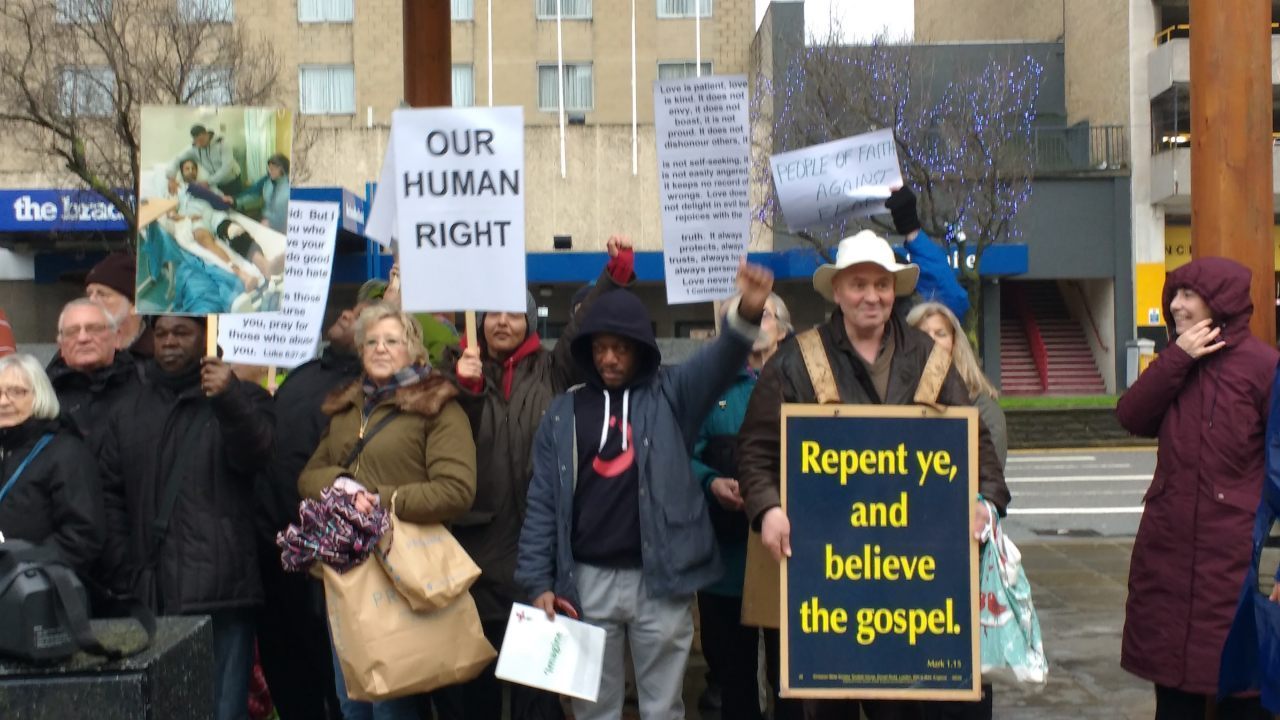 Ahead of the rally, The Bishop of Bradford, the Rt Revd Dr Toby Howarth and Mohammed Rafiq Sehgal, President of the Council for Mosques, issued the following joint statement:

“We as Bradfordians, as brothers and sisters in humanity, reaffirm our right as human beings to choose what we believe and how we live in Bradford, our home.

“We stand in solidarity with Bradfordians who exercise this freedom to follow their conscience, and we reject any kind of hatred or violence as a result of their choice. We stand together against any violence that comes from hatred and ignorance of each other’s life choices.

“Recently Bradfordians rejected the hate of the EDL, and today we continue to reject intolerance.

“Bradford includes people who have chosen to convert in different ways: from no faith to faith, from one faith to a different faith or from faith to no faith. While we value our own beliefs and convictions, and we are aware of the pain that these choices can cause, we nevertheless affirm that freedom of belief is both a legal right and a God-given liberty.

“Bradford has a proud history of welcoming and providing a home to people from across the world and with many different beliefs and cultures. Today we stand as people of different faiths and convictions to say that we reject hate and violence, and that we encourage people to live out their choices freely and responsibly.”

The Rt Rev Dr Howarth added: “Freedom of religion, including freedom to practise and to change our religion, is a precious gift as well as a basic human right. We cannot allow that freedom to be attacked or subverted in this city which is home to people of many different faiths as well as those who are not religious. We need to be clear that hate crime, including religious hate crime, whoever does it and whoever it is done to, has no place in our city.”

Mohammed Rafiq Sehgal, speaking after consultation with senior Islamic Scholars, commented: “Choice of a religion is a private and personal matter. Any person choosing to follow a particular faith should be allowed to do that without fearing harassment, intimidation and violence.”