Last week, mega bank UBS published a document entitled “The Future of Europe”, written by analysts in its Chief Investment Office. The message of the report is clear: we need more migrants for cheaper labour in Europe, or big, corporate profits will be hit. But it also states that Britain exiting the EU may help smaller nations and lead to treaty change for the European Union (EU).

The document begins with quotes from European Commission President Jean Claude Juncker, and billionaire “no borders” campaigner George Soros. It states, right from the get go: “To match the US labor growth rate, the EU needs 1.8m additional immigrants (of working age) annually for the next 10 years…”

In other words the migrant crisis – while a nightmare for Western Civilisation, for towns and cities across Europe, and for European security – is perfect for those who want more cheap labour on the continent. This point is accidentally underscored by the authors’ own inclusion of tables that reveal the unemployment rate in Europe was 10.2 per cent in 2014, while just 6.2 per cent in the United States.

But despite the fact that Europe has a labour force not currently being put to work – the authors suggest it is time to important more people from around the world. To their minds: “The dysfunctional reaction of Europe to the refugee crisis and the related chaos at its borders has not improved its image as a highly desirable destination for immigrants. What’s more, our estimate that 1.8m additional net immigrants of working age are needed annually to match US labor growth dwarfs the number associated with the current European refugee crisis, estimated at one million last year.”

But the numbers claimed by UBS – specifically the one million “refugee” claim – doesn’t stack up from either side of the argument. 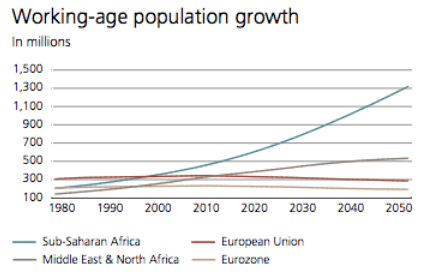 Firstly, it is being widely acknowledged across Europe that the figure is more likely to be over 1.4 million, as European authorities do not include the number of “overstayers” – those told to leave who don’t – and those who remain “beneath the radar” and “do not register”. This suddenly comes a lot closer to the 1.8m that UBS state they want to see in Europe. And refugees aren’t the only immigrants into Europe. A total of 3.4 million people immigrated to one of the EU-28 Member States during 2013, according to the EU’s own stats.

But from the other perspective – a migrant crisis of this sort may attract a majority of working age men from the outset, but they will soon be eclipsed by millions of dependents that they “send home for” – as the Financial Times reports just today. The idea of creating a larger labour force out of this migrant crisis suddenly becomes questionable, especially considering the dependents, the capital outlay required to process, police, and house them, and indeed the pension liabilities that will emerge as a result. 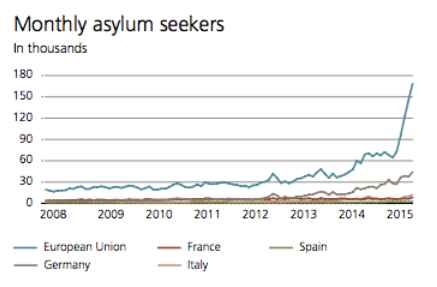 But UBS is concerned with its bottom line today. Damn the torpedos, full speed ahead.

THE FALLACY OF AN EU SUPER STATE

UBS considers, throughout its report, the European Union as a country – just like China, Russia, or the United States of America. Its analysis relies on the assumption that the EU is not just a trade or political union, but one country, moving in tandem.

The truth is quite the opposite, though it will come as a surprise to U.S. pro-immigration campaigners that their system is considered to be a “strong open immigration policy” by the big corporates. Donald Trump may wish to wave this report around at his next rally.

“Populism” is a recurring theme throughout the report, but the authors are far from complimentary about political parties that represent the will of the people on the issue of immigration. UBS acknowledges: “Last spring 38% of the EU public was already citing immigration as the most important issue facing the EU; it overtook unemployment and the overall economic situation in that regard and was up from 21% a year earlier. Extra-EU immigration in particular has been provoking negative public reaction.”

“UK Prime Minister David Cameron made limits on immigration even from inside the EU a clear and fundamental condition for the UK staying in it. These facts suggest that the EU lies on a spectrum somewhere between the US and Japan in terms of openness and willingness to absorb immigrants on a large scale.”

The report suggests that importing more people is good for care of the elderly, passing no judgement on who will care for the people who care for the elderly when they themselves age. What they call “cyclical” may actually mean a “spiral” of immigration – with Europe’s population skyrocketing over the next few decades simply for society to try to keep up with itself.

UBS makes no mention of the finite nature of space, infrastructure, resources, or time lags that have been all too apparent in EU member states struggling to cope with mass migration at a macro-level: including the United Kingdom, where there is a healthcare crisis, where the transport network is creaking, and where there is an unprecedented shortage of primary school places.

“Populism is a giant growing in slow motion,” the report acknowledges, even graphing the rise of parties that reflect the will of the people across the continent. 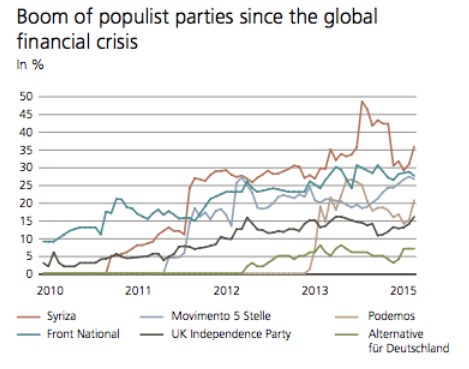 “Europe needs a major treaty revision, but it may be far off,” notes UBS. “Moreover, for it to be effective, it would have to address highly contentious issues such as more sovereignty sharing through a central treasury and fiscal ministry, debt mutualization, provisions for government default among members, more authority for the European Parliament and increased power for the high representative for foreign affairs.”

This is pivotal. And should be a central point for Eurosceptic campaigners across Britain ahead of the European referendum. There is a need for major treaty change – even the corporate puppet-masters acknowledge it. But it’s unlikely to happen, certainly not as a part of PM David Cameron’s “renegotiation” – it’s not even on the table.

But the mask slips further. One of Mr. Cameron’s renegotiation points is an opt-out for Britain from the EU’s principle of “ever closer union”. What UBS makes clear is that for any treaty change to be “effective” there would need to be a greater centralisation of power to Brussels. It even talks about “sovereignty sharing” and lists fiscal and monetary controls – that is to say EU-wide taxes paid directly to Brussels, as well as “debt mutualization” – the idea that what the European Union nations spend could somehow be lumped on to the books of Britain.

More authority of the European Parliament, and indeed foreign policy for member states run from Brussels. We’ve started to see all of these things across the European Union in recent years. What the UBS report reveals is that if there were to be treaty change – which we all currently think of as a good thing, or at least a better thing than what we have now – it may actually go the other way: a brazen power grab by the EU political and financial elite.

A recurring theme in the report is Brexit: a British exit from the European Union.

Yes, it would likely be a catastrophe for the European Union to lose its second largest economy. But it would also free Britain to be a sovereign nation again, making her own trade deals, foreign policy, regulations, laws, and so forth. Critically: it would mean a return of border control to the UK Home Office – the single largest point of contention in British politics today.

“The UK revoking its EU membership could have profound implications for the functioning of the union,” the report states.

But we may also be doing the Euro (currency) philes a favour. Maybe the likes of Guy Verhofstadt and Jean Claude Juncker should be joining UKIP leader Nigel Farage on stage at Brexit rallies. According to UBS: “Britain’s exit would likely speed up the reorientation of the European Parliament, European Commission and European Council toward the Eurozone.”

“Absent the UK, the rump of EU nations outside the single currency would be further overwhelmed by the “ins,” given the fragmentation of the “outs” (eight countries whose economies in total equal the UK’s) and the voting rules in the European Council and the European Parliament.

“On one level, a UK exit could be seen to promote European integration. It would ensure that, contrary to Britain’s demands, national parliaments wouldn’t benefit from enhanced veto powers on legislative proposals from the European Parliament, and it may make an EU treaty change more feasible.”

So perhaps to aid EU treaty change – the best thing Britain could do is leave?

Tell that to the pro-EU liberals, often the same types to make the case for disproportionate philanthropy on behalf of all tax payers of the United Kingdom. “If we leave, we would be HELPING the Eurozone and greater EU integration… why don’t you want that for them? Bloody racist/imperialist/Little Englander!”