As central Europe builds up to the climax of the carnival season next week there have already been a number of sex assaults by so-called asylum seekers, despite a massive police presence.

Police in North Rhine-Westphalia (NRW), the German state worst hit by the migrant sex attacks, have deployed thousands of officers to the streets of cities like Cologne and Dusseldorf, established city-centre “safe spaces” and erected powerful generator-powered floodlights in dark streets. Despite these extensive precautions, German women still don’t appear to feel safe, and there have been a number of attacks on the first full day of carnival. 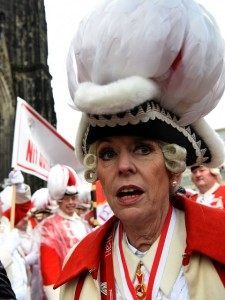 Controversial Cologne mayor Henriette Reker addressed the carnival and warned people off drinking too much beer, but made no mention of the migrant rape crisis / PATRIK STOLLARZ/AFP/Getty Images

Under the headline “revellers in fear” German magazine Focus reports the comments of festival-goers who told reporters they wouldn’t have come without male escorts. And some who went out alone have learnt the hard way what it means to be a young woman in modern Germany.

In Cologne, a 17-year-old Afghan migrant was arrested at his government-funded camp after he knocked down and raped a 22-year-old woman last night. He had approached her in the street and showed her “pornographic video” on his mobile phone, reports Kronen Zeitung. He suddenly, and without warning, struck her in the face, causing the woman to lose consciousness.

At yesterday’s carnival celebrations there were around 22 sexual assaults and rapes, at least double the number recorded on the same day in 2015.

In another NRW town, a 24-year-old woman was raped in broad daylight during carnival festivities by a Nigerian migrant who spent last night in police custody, reports Focus.

Others have taken more pro-active steps to prevent migrant assault and attack.

The children’s carnival party in Herne was totally cancelled after organisers received a letter in Arabic and German calling the children “infidels”.

Initially the group said they had cancelled the party for 250 young Germans because of “organisational reasons”, but later admitted there had been a threat.

The letter writer is under investigation by police, reports Junge Freiheit.

In total there were 224 criminal reports in Cologne including 22 sex offences with 180 arrests. In Dusseldorf, there were 912 police operations, up from 725 last year, with twice as many offences against women, reports Focus.