Britain’s longer-standing immigrant populations are turning against government migration policy and mass migration from the European Union (EU) according to a recent report by the Financial Times.

Speaking to Henry Mance, political correspondent at the newspaper, immigrants in highly “multicultural” areas around the United Kingdom are beginning to vent their frustrations over the sheer number of people now entering the country, as well as the “something for nothing” culture that comes along with it.

Satvinder, an Indian-born, UK immigrant now living in West Bromwich said of EU migrants: “They’ve never paid into the system… When my father came, he never claimed a penny in benefits. If he was out of a job one week, he was in a job the next week.”

The phenomenon of pro-border control migrants, or those of a migrant background, is not new, and not limited to the United Kingdom either. Earlier this year Breitbart London reported on right wing German political parties attracting support from immigrants:

One man who’s profile picture is himself with a Turkish flag, wrote on the [Alternative for Germany party] page that recent migrants are, “antisocial parasites who take what they want by force.”

Another man with an Arabic name says that migrants are responsible for the huge influx of reported sexual assaults and violence and tells the [party] they have his support.

The FT’s report finds that “As of 2013, the last year for which full data exists, there were 6,000 Polish nationals in Sandwell, roughly on a par with the local Indian population. Since then, central Europeans have kept coming to a town already suffering from social and economic strains.”

“At the moment I feel we’re being abused,” one resident, Octavia Carrasca, originally from St Lucia, commented.

“People are coming here and they’re getting things I never got.”

Her comments chime in with research conducted by the British Social Attitudes (BSA) Survey in 2014, which found that while migrant-on-migrant attitudes were broadly positive, there was a strain of anti mass migration sentiment within immigrant communities.

Of migrants themselves, these figures are 20 per cent and 17 per cent respectively, and while obviously not a majority, these feelings are believed to be growing within migrant communities in Britain.

According to the Transatlantic Trends study, Britain remains affirmably the most anti-immigration country of those studied, even beating the United States for sentiment about illegal immigration: arguably the main talking point of the primary campaign within the Republican Party today. 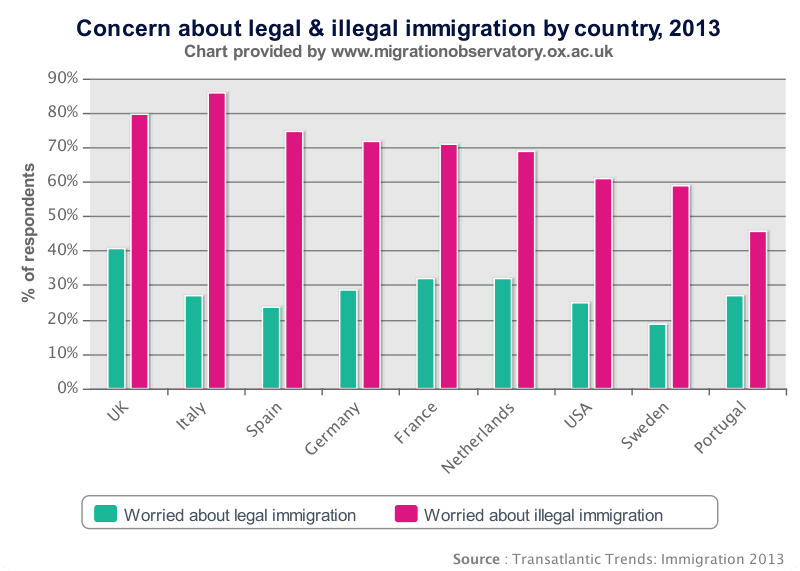