An alliance of nationalist groups is planning a demonstration in Dover this weekend, dubbed “Stop the Fakeugees and Gimmigrants”. They will be met by numerous ‘Anti-Fascists’ and ‘Anti-Racist’ groups – hard left protesters with equally, if not more violent histories.

The event will be held on Saturday, the same day as the anti-Islamisation group PEGIDA UK walk in Birmingham, and has been organised by the South East Alliance, which describes itself as “ANGRY, WHITE & PROUD”.

The group says it is a “non-political community based street movement that will seek to act as a UNITY platform for the right”.

Their members have links to the National Front political party, the English Volunteer Force and British Movement groups, and even the English Defence League. Their explosive flyer for the event reads:

“In 1940 when the Luftwaffe started dropping bombs on our cities and towns, the British people didn’t pack up and move, we didn’t get the boats out start rowing across the sea. We dug in! We put our flags up and two fingers and said ‘BRING IT ON’.

“These fakeugees and gimmigrants are only fleeing for one thing, our money, Europe’s money because most of our nations are ruled by weak, limp wristed traitors. All these men are of fighting age, young, fit, willing and able to rise up against our nations.

“We must act as the traitors in the house of treason have failed, our families and communities. Their open door immigration policy for many years has tore this country in two”, they write.

Adding: “See you in Dover 2nd April. No surrender!”

Last time the nationalists and hard left met in Dover in January, things got very messy. Nazi salutes were displayed, there was brawling in the street, wooden batons swung and volleys of bricks flew through the air. The violence was instigated by the hard-left campaigners, pictured below, pulling bricks from the streets and provoking nationalist marchers. 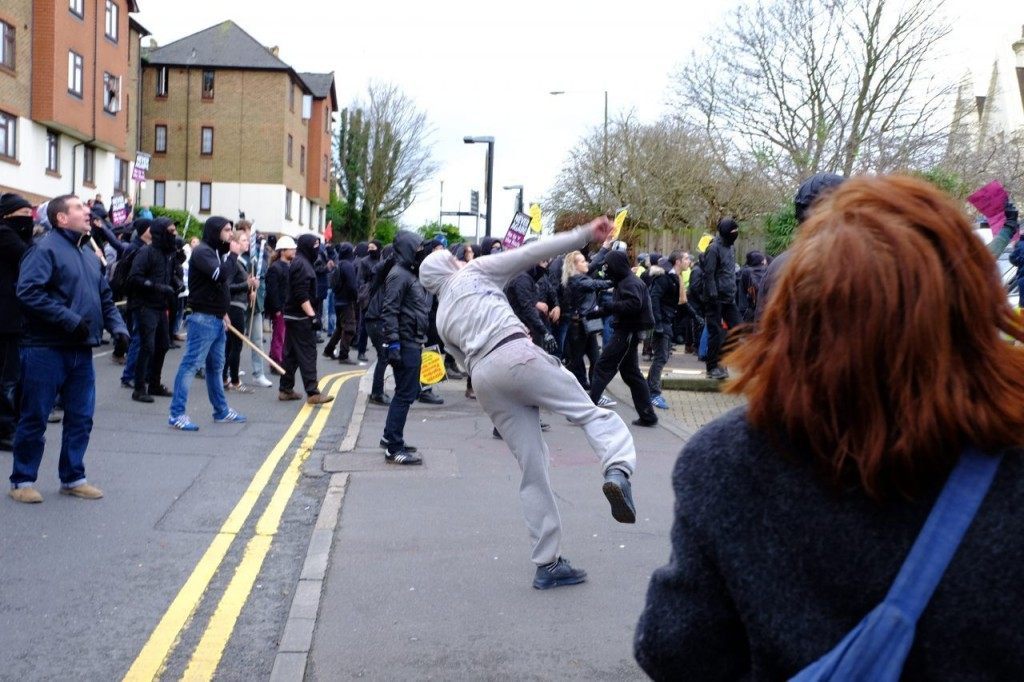 Diane Abbott, Labour’s hard-left Shadow Secretary of State for International Development, was also in attendance, giving her credence to the show of violence.

This time, London Anti-Fascists and the Kent Anti-Racist Network have planned a joint counter demonstration, laying on coaches from the capital for £10 a head.

They claim on their Facebook event page that, “these [Neo-Nazi] groups left a trail of violence and vandalism in the town when they last marched on January 30”, despite the fact the ‘Anti-fascist’ vastly outnumbered them, and caused the larger share of destruction.

“They have no support in the town, but bring their hatred to our community, pretending to care about locals and lorry drivers. They are the British equivalent of the groups in Europe that are attacking and murdering migrants”, they continue.

Adding: “Dover has a proud history of standing up to fascism and we want to celebrate our open and welcoming community”. And calming that: “We now see across Europe a climate of bigotry and hatred is on the rise – the scapegoating of migrants, attacks on the Muslim community and an increase in anti-Semitism.

“So, on Saturday 2 April, we will take to the streets in peaceful united protest to defend refugees and oppose the neo-Nazis”, they write.

The event is on the same day as PEGIDA UK’s silent walk in Birmingham, and its organisers will probably be relieved that both groups will be preoccupied with each other, hundreds of miles to the south. Breitbart London will provide on the ground coverage of both events.