U.N. Secretary General Ban Ki Moon has surfaced, once again to lecture the Anglosphere and the Western world about its “duties” to hurriedly absorb nearly half a million more Syrian migrants. The war-torn country’s surrounding nations, he argues, have done the heavy lifting already. Now the U.N. chief wants you and your communities to do more.

There is a misconception that all Syria’s neighbours have shrugged their shoulders towards their Muslim brethren, scorning the Ummah out of rugged self interest. It’s not strictly true. But the dichotomy presented – that it is us or them – is a false one, and one that European and American leaders should not be afraid to reject outright.

The New York Times reports that the Sec. General opened a conference in Geneva today, demanding “an exponential increase in global solidarity”, insisting that “Neighboring countries have done far more than their share” and imploring “Others [to] now step up.”

And of course the stress was on European Union member states and the United States of America to do more. The news follows quickly on the heels of Oxfam – one of the world’s most political charities – demanding that France, the United Kingdom, the United States, the Netherlands, and Denmark all take in more “refugees” and faster.

Of course of the nearly 5 million fleeing Syria, most of these remain in the Middle East, with countries like Lebanon, Turkey, Egypt, and Jordan inundated by their neighbours. In part, this is what has spurred Turkey on to shipping their problems off into Europe – especially the Kurdish one.

It is noteworthy too, that Oxfam and Ban Ki Moon’s criticisms were levelled at Western nations not because we have the infrastructure or capability to deal with the influx (we don’t) – but because we are, apparently, “rich”. (We’ll just casually ignore our gargantuan debt crisis for the moment, shall we?)

But while the United Nations lumps the responsibility onto the West, you might ask why countries like Saudi Arabia, which claims to have absorbed around half a million Syrians, do not provide any data to support their statements. Indeed, in 2013, net migration of those deemed to be Syrian nationals stood at around just 20,000, with criticism aimed at the country for only accepting Syrians who already have families in the Kingdom. 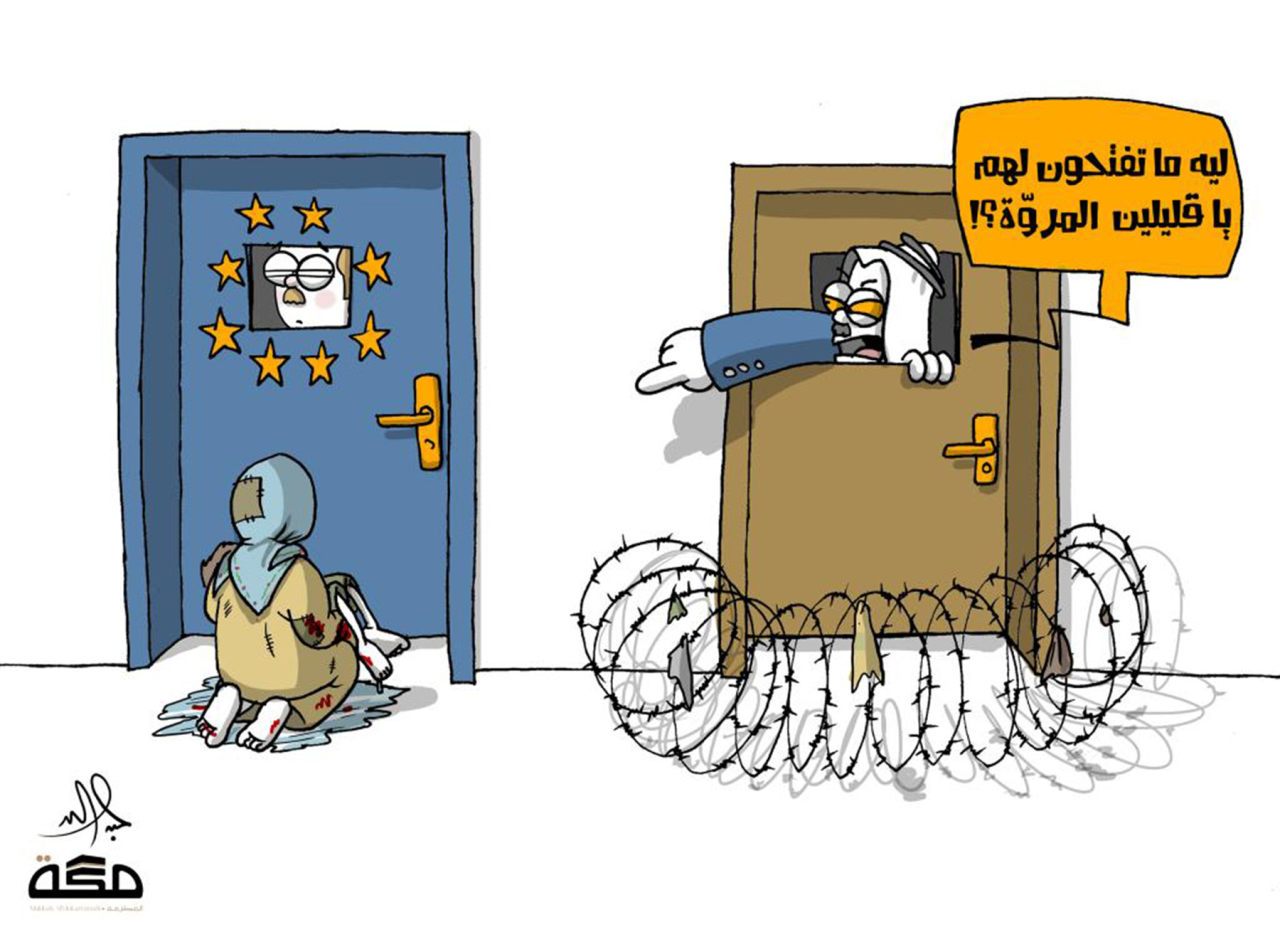 A cartoon by Saudi artist Abdullah Jaber which reads, “Why don’t you open your door? Don’t be heartless!” is seen in this undated handout illustration released to the media on Wednesday, Sept. 02, 2015. As more Syrians suffocate and drown on the risky journey to Europe, a backlash is brewing against Gulf states, wealthy and overwhelmingly Sunni like the refugees, for not offering to host any of them. Source: Abdullah Jaber for Makkah newspaper

In fact countries that could take more, and haven’t remain free of criticism, presumably because they aren’t signatories to the 1951 UN Refugee Convention. This isn’t a sign that we are better. It’s a sign that we are dumber. We as Western nations afford moral and political equivalence for almost all other countries around the world nowadays (most recently, Cuba and Iran) but we don’t make the same demands of these countries as we place upon ourselves.

What about Malaysia? Why can’t they take more migrants and refugees?

It’s almost as if there’s a whole world out there.

But the onus is, apparently, on Britain, France, and America. We are destined to follow Germany’s lead, a country now inundated with migrants not just from Syria, because Mrs. Merkel stupidly threw her doors open and declared, “Come one, come all!”

Perhaps we should look to the words of Batal, a Syrian refugee who spoke to Bloomberg, for why the pressure is being placed on Western countries and the Anglosphere: “In Europe, I can get treatment for my polio, educate my children, have shelter and live an honorable life… Gulf countries have closed their doors in the face of Syrians.”