The rabble of around 20 activists, calling themselves ‘Stand Up to UKIP’, turned up at the Glasgow Grassroots Out meeting in Scotland on Thursday night.

“No borders no nations, fuck deportation!” they repeatedly chanted over a microphone. Others swore at people entering, holding signs that read “Your Hatred Isn’t Welcome Here”.

As the event began, with the chants continuing in the background, one woman broke in and ran through the crowd lunging at David Coburn, the UKIP MEP for Scotland, before being dragged out.

Coburn said"hello" then all hell broke loose. Protesters being dragged out. https://t.co/owa8F6Jbm5

When asked what their views were on the referendum, the group was split, with about half even voicing Euroscepticism.

When asked why ‘Stand up to UKIP’ had picketed the cross party event, one of the protestors told Breitbart London: “Basically, every time Nigel Farage has been in Scotland for the past three or four years there’s been a protest that’s basically showed him he is not welcome”. 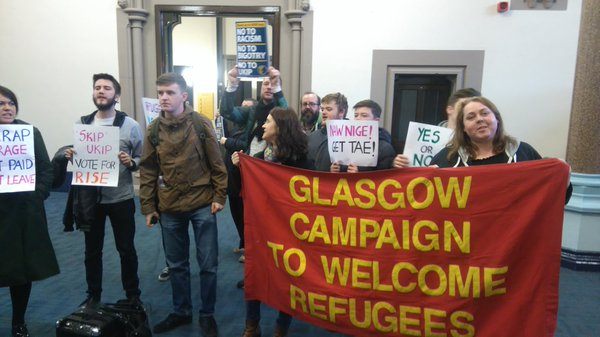 Joshua Brown, who was leading the chants over microphone, said that UKIP were racist, because, “they had no black faces on the front of their previous manifesto, and [use] really inflammatory rhetoric against refugees and migration using terms like “floods of people.”’

A UKIP activist, Jack Jardine, challenged one of the protestors about the claims of ‘racism’, offering them a copy of UKIP’s manifesto to read.

“No, I don’t have to read it to know you’re a racist”, the activist replied. Adding: “I don’t care about your freedom of speech, I care about refugees.”

“It’s not about one political party or another, it’s not even about the referendum, it’s about standing up against racism, misogyny, sexism and all of the terrible things UKIP represents”, Mr. Brown also claimed. 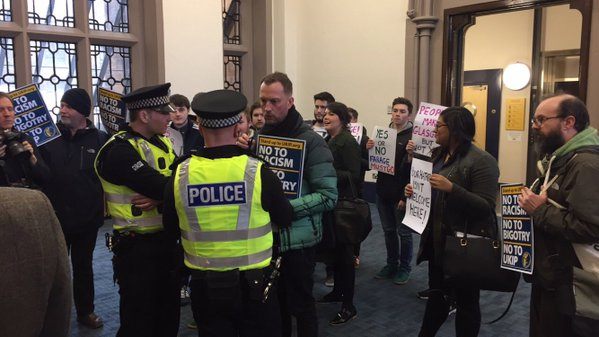 As Mr. Farage took to the stage later on, he accused “so-called” Scottish “nationalists” of “closing down” political debate in Scotland.

“There has been a deliberate attempt by the so-called nationalists to close down genuine, open, proper political debate in this country.”

Later he added: “We’ve been told for the last few years that Scotland is different to the rest of the United Kingdom. But actually the fact is we’ve never had the debate in Scotland because the parties in Holyrood are all in hock to the European project.

“Let’s have that debate. Let us wipe the smirk off the face of the Edinburgh political establishment. Let’s stun them in this referendum on 23 June.”