Activists from the anti-mass migration Identitarian movement stormed a pro-migrant play by ‘refugees’ in Vienna last night. Some ended up ‘brawling’ with leftists in the crowd, with both sides blaming the other for violence.

Around thirty activists from Austrian branch of Génération Identitaire took to the stage during the performance in the University of Vienna’s main auditorium, before a crowd of around 700 students.

They held banners that read, “Multiculturalism kills”, and, “Hypocrites! Decadence is our downfall”, and poured fake blood on stage “as a symbol of the sacrifice of the asylum policy”.

“The action is not directed against asylum seekers on the stage, but against the hypocrites in the audience and their politics,” one of the activist insisted. 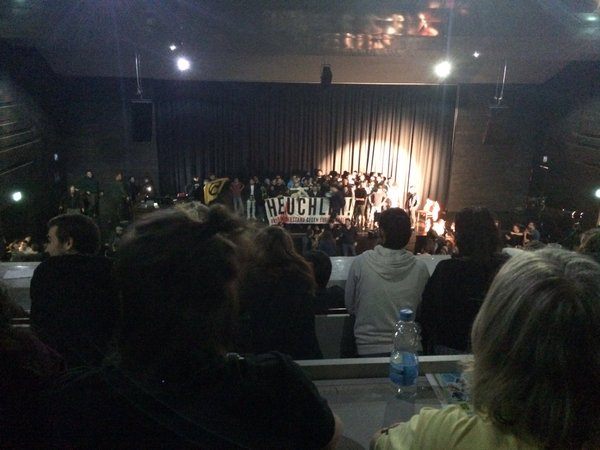 The play, The Protégés, by Austrian Nobel Prize laureate Elfriede Jelinek, is about refugees and mass migration, and portrays the European Union as xenophobic and not generous enough to newcomers.

The “hipster right” Génération Identitaire group are a notably young movement of anti-mass migration activist who engage in direct action across Europe.

The activists quickly got into a scuffle with members audience last night, and eight people were allegedly injured. Futter reports that three people were arrested, and police are continuing to search for all those involved.

In a press statement, the Austrian group claimed they were “attacked massively from the far left in the audience, but remained calm and thus prevented an escalation”.

They said they condemned, “violence by the activists in any form”, and insisted that, “reports of casualties” were “lies” and “the extent of action by left wing groups is not mentioned in the media”.

The Student Union, meanwhile, claimed that the activists, “stormed the stage, swung a [banner] and sprayed people with fake blood” and that “several people in the audience were beaten, pushed and hurt”.

“The [Student Union] has immediately informed the police”, they said, adding: “The performing refugees decided to continue the event.

“Neither performing refugees nor the [Student Union] will be intimidated by the right-wing violence. We will continue to oppose all forms of fascism.”

The Green Party Deputy Mayor of Vienna, Maria Vassilakou, described the protest as, “a rowdy group from the neo-Nazi milieu”, who had engaged in, “a tasteless game with fear and violence”, on Facebook.

The pro-migrant play was, “one of the best initiatives of recent months”, she said. Adding: “You tried to divide people who want to live together peacefully”.