A letter seen exclusively by Breitbart London has revealed that the officially designated ‘Vote Leave’ campaign group does not believe that Britain should invoke Article 50 of the Lisbon Treaty and leave the European Union (EU) if Britain votes for Brexit. The news has caused outrage amongst leave campaigners. 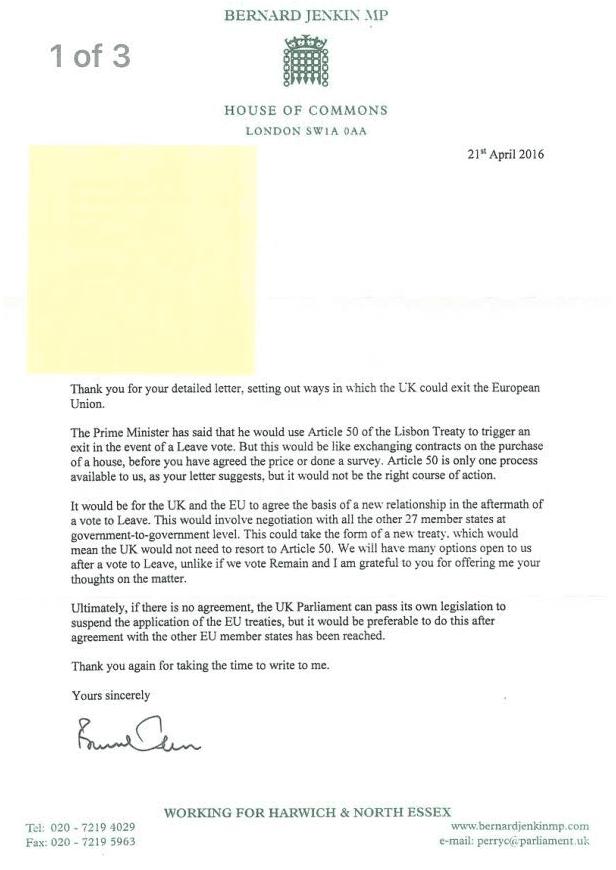 In a letter dated April 21st 2016, Bernard Jenkin MP, of the directors of Vote Leave, tells a constituent that they believe invoking Article 50 and leaving the European Union “would not be the right course of action”. He also suggests Britain enters into a “new treaty” with EU member states.

“…this would be like exchanging contracts on the purchase of a house, before you have agreed the price or done a survey” he asserts.

Instead, Mr. Jenkin suggests that Britain should enter into a “negotiation with all the other 27 [EU] member states at government-to-government level”.

But given the length of time negotiations take perhaps undermines this, or at least condemns Britain to another decade of EU membership.

For instance, Canada’s negotiations with the EU has taken around eight years. The U.S.-EU deal has so far taken three. The same with China. Switzerland’s took five, and India’s negotiations are currently frozen.

For Britain to enter into 27 concurrent negotiations will no doubt that extend any potential ‘leave’ process.

Thank you for your detailed letter, setting out ways in which the UK could exit the European Union.

The Prime Minister has said that he would use Article 50 of the Lisbon Treaty to trigger an exit in the event of a Leave vote. But this would be like exchanging contracts on the purchase of a house, before you have agreed the price or done a survey. Article 50 is only one process available to us, as your letter suggests, but it would not be the right course of action.

It would be for the UK and the EU to agree the basis of a new relationship in the aftermath of a vote to leave. This would involve negotiation with all the other 27 member states at government-to-government level. This could take the form of a new treaty, which would mean the UK would not need to resort to Article 50. We will have many options open to us after a vote to Leave, unlike if we vote Remain and I am grateful to you for offering me your thoughts on the matter.

Ultimately, if there is no agreement, the UK Parliament can pass its own legislation to suspend the application of the EU treaties, but it would be preferable to do this after an agreement with the other EU member states has been reached.

Thank you again for taking the time to write to me.

Leave.EU campaigners have told Breitbart London that the development is “extraordinary” and that “if Britons vote to leave, they expect to leave. They do not expect some half-baked, renegotiation, or double-referendum fudge”.

LISTEN TO RAHEEM KASSAM DISCUSS THE EXCLUSIVE WITH JON GAUNT: