Just when you thought the scaremongering couldn’t get any worse, the leaders of the G7 nations have weighed in with their verdict on Britain’s EU referendum: apparently if the UK votes Leave it’s going to kill the global economy.

“A UK exit from the EU would reverse the trend towards greater global trade and investment, and the jobs they create, and is a further serious risk to growth,” G7 leaders said, in the only reference to the vote in a 32-page declaration.

This joint threat by the leaders of the G7 (Canada, France, Germany, Italy, Japan, the United Kingdom, and the United States) is but the latest in a series of dire warnings of the terrible things that might transpire were Britain to leave the European Union. They include: fewer students; more cancer; the death of science; starving pensioners; a year-long recession; tumbling house prices; higher food prices; more terrorism; the loss of half a million jobs; more crime; and the outbreak of World War III.

The close pal of the PM said he knew the government’s referendum numbers were fabricated “because I used to do that stuff”.

And the public knows this too. What the polls are showing is that the leading politician in the Brexit campaign, Boris Johnson, is trusted to tell the truth about the EU by more than twice as many people as trust the Prime Minister on this subject. Furthermore, people say they trust the Leave camp more than they do Remain.

Given the depths to which Remain has stooped, this is hardly surprising. Their propaganda has been christened Project Fear but really it ought to be known as Project Total Hysteria.

It’s possible, of course, that this may be effective. The Remain campaign appears to have calculated that the voting public are so incredibly stupid and ill-informed that they will believe any old nonsense so long as it is shouted loudly enough.

An example of this approach is the poster campaign produced by Operation Black Vote. Though Operation Black Vote is supposed to be an independent and – by law – non-politically partisan charity, it is run by a Remain campaigner and has been given £28,000 by the department of fiercely Europhile Cabinet Secretary Sir Jeremy Haywood. 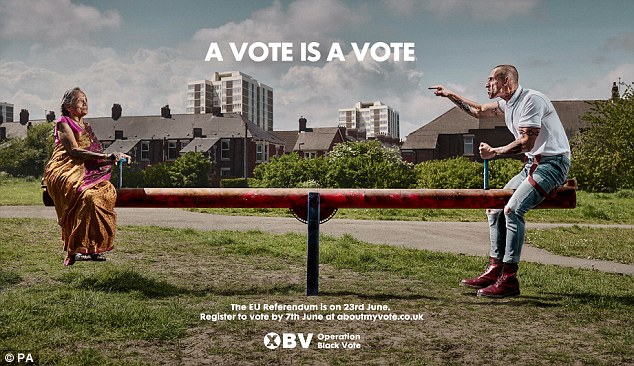 As not a few people have noticed, the poster is essentially telling ethnic voters that if they don’t vote Remain, then they will be harassed by Brexit voters who are all snarling racists. Both the traditionally dressed elderly Indian woman and the skinhead are caricatures out of the 1970s. But Britain has moved on since then and people from ethnic minorities may well resent being treated as an ignorant, malleable bloc vote to be manipulated by cheap propaganda. Certainly, in my own conversations on the campaign trail, black and other ethnic minority voters are no less likely to be in favour of Brexit than white people. It’s their country too and they’re just as proud of it and just as keen to defend its interests.

My own view is that the more hysterical and dishonest Project Fear gets the better it will be for Brexit.