The latest YouGov survey shows just how close the referendum will be, with Leave polling at 43 per cent and Remain just one point behind at 42 per cent, with 15 per cent are still undecided.

For a long time since the announcement of the referendum on Britain’s membership of the European Union (EU), Remain enjoyed a comfortable lead. Recent polls, however, many of which show the Leave side winning, show that Remain’s “Project Fear” campaigning isn’t working.

YouGov asked respondents: “In a referendum on Britain’s membership of the EU, how would you vote?” 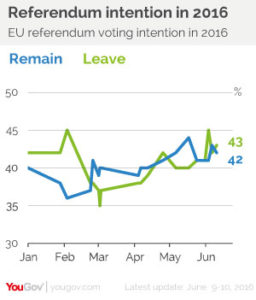 A graph showing the results of Brexit polls since 2011

Increased support for Brexit as the 23 June polling day draws nearer bucks the general trend in UK referenda. In five out of six of the referendums held in Britain since 1975 support for the status quo options grew as voting day got closer.

Business Insider UK reported that: “YouGov’s polls have been fairly damning toward the Remain camp, which respondents have said is responsible for the most scaremongering, negativity, and dishonesty”.

The biggest boost to votes for Brexit, according to Tory election guru Lynton Crosby, has come from Leave’s increased focus on immigration. Previously, figures from Vote Leave like UKIP MP Douglas Carswell and Conservative MEP Daniel Hannan had said they wanted instead to focus the campaign on issues such as international trade deals and the NHS.

“I think there is a difference of strategy between the two campaigns [Vote Leave and Leave.EU/UKIP]. On the one hand I think that Leave.EU wants to put more of a focus on identity and questions of immigration. I happen to believe, and I think Vote Leave happens to believe that we want an optimistic, upbeat, internationalist message.”

Mr. Crosby wrote at the end of May of Leave’s improving performance:

“While this ORB poll shows the Leave campaign is being more effective, they will need continue to campaign with the same effort over the coming weeks if they are to bridge the vote gap.

“The ORB research demonstrates where Leave have made progress.  Their net lead over Remain on immigration has increased by eight points (to +29) with a majority (52%) of voters believing Leave has the right position on the issue.