The European Union referendum, no matter how you look at it, was won because of the efforts of one man: UKIP leader Nigel Farage.

But Nigel Farage and the 17.5 million people who attracted over 25 years to the Brexit cause are not running to be the Prime Minister of the United Kingdom. This is exclusively a Conservative Party decision.

But as Farage himself said today, he’d back anyone who’s Brexit – who is genuine. And I simply don’t believe that Boris Johnson is.

He’s flip-flopped so much during the referendum campaign I genuinely started to wonder if he was about to perform a last minute, Sarah Wollaston-esque defection.

He’s wobbly on immigration and free movement (he wants an amnesty for illegal immigrants!) He’s used the last few days to raise serious concerns over his position on Article 50 and potential “associate membership” of the European Union, and his horrific service as London Mayor makes one wonder if the man has a conservative bone in his body. There’s just no conviction about the man.

Now Michael Gove is a different prospect. But he’s not running for leader. He’s just going to be Boris’s “credible” name for his campaign. And that’s a boon for Boris.

But it’s not enough to make me believe that a Boris government would definitely invoke Article 50, and wouldn’t be battered about by media pressure, trades unions, and the left-wing of the Conservative Party. Gove himself is a self-identified liberal. He was an architect of the much despised Tory ‘modernisation’ project.

Yes he’s strong on paper on radical Islam, but words are really not enough. I’ll give him the fact that people think he did a great job with education reform, but what we face in the Brexit debate will need something extra special: vision.

And that’s why I think Liam Fox would make a great Prime Minister. 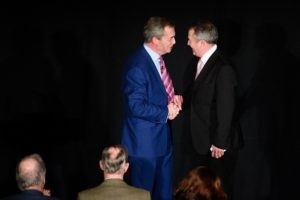 Okay, Fox is a little arrogant. But his running mate could and should be Andrea Leadsom, who will ground him like Gove grounds Boris. Plus he talks to, likes, and listens to Nigel Farage. And we need Nigel in this position.

The only difference is Fox is a much more serious character. He was an excellent Defence Secretary, and he had fantastic connections to the main economy we need to work with for a trade deal: the United States.

In fact he’s revered over there by Republicans. That sort of linkage is priceless.

And Leadsom, while lacking cabinet experience, was truly one of the stars of the otherwise tepid ‘Vote Leave’ media line-up. She outperformed Boris, she outperformed Gove, and her recent commitments to ending freedom of movement – which is real “stick your neck out stuff” inside the Tory Party – gives me great hope.

Free trade with the EU will be in all our interests. But essential we agree free movement no longer applies to UK. Confident we can do this

I think the machine is stacked in favour of Boris and Gove, especially when you consider that David Cameron’s chief strategist Lynton Crosby is advising their campaign.

But I find it very difficult to trust them. And I think the team that will deliver for Brexit is the harder-line Fox and Leadsom duo.