Disgruntled ‘Remain’ campaigners are mounting a huge social media campaign to encourage the anecdotal reporting of perceived “hate crimes” which they, the media and even the police have explicitly blamed on the Brexit vote last week.

“These are dark and dangerous times but hopefully we can spread some awareness and help keep each other safe,” claims the “Worrying Signs” Facebook group, which evolved from a public picture album of the same name.

The page has rapidly accumulated almost 12,000 members, and the campaigners behind it encourage them to “share information, post pictures, add screen grabs (etc.) of any worrying signs or incidents of racism / xenophobia you’ve come across since the UK EU referendum results”.

All posts are kept “public and shareable”, with the aim of them going viral and entering the mainstream media, where they have been blamed on the Brexit campaign.

Yesterday, the Metropolitan Police revealed that “hate crimes” have “surged” by 57 per cent since the referendum.

The National Police Chiefs’ Council told the Guardian that 85 incidents had been reported, compared to 54 during the earlier period. “It’s no coincidence this has come off the back of the EU vote,” a police source claimed.

However, all of the perceived crimes were reported on the “Stop Hate Crime” website, rather than in a station or to an officer.

It takes just minutes to report a “hate crime” online, all from the comfort of one’s armchair. It raises questions therefore over the massive social media push and how responsible online activists are for the “surge”. It is entirely possible that a percentage of reports are politically motivated. This is a tactic that was previously used by one “anti-Islamophobia” group in order to boost their “hate crime” numbers. They lost government funding after it was revealed they had artificially inflated the reports.

Any people from eastern Europe experienced racism in the UK since referendum result? Email sarah.marsh@theguardian.com

The Associated Press reported that “Intolerant acts surge as British referendum result sinks in”. The journalist responsible, Raphael Satter, even commented in the Facebook group, writing:

“Hello all, here’s a story I wrote for AP on the surge of intolerance shaking Britain, with a lot of help from the people who posted to Worrying Signs. Thank you all so much. To everyone else: please don’t hesitate to contact me if you experience violence, intimidation or harassment in the wake of the referendum result.”

The latest story to be generated by the page is a video of a pair of teenagers bemoaning “immigrants”, and threatening them with “deportation” on a tram in Manchester. “Racism After Brexit: Teenagers Hurl Abuse At American On Manchester Tram”, reported the Huffington Post.

Journalists are closely following the page, jumping on any potential lead that fits their narrative. Pictured are the comments left below the Manchester video on Streamable, a link to which was p 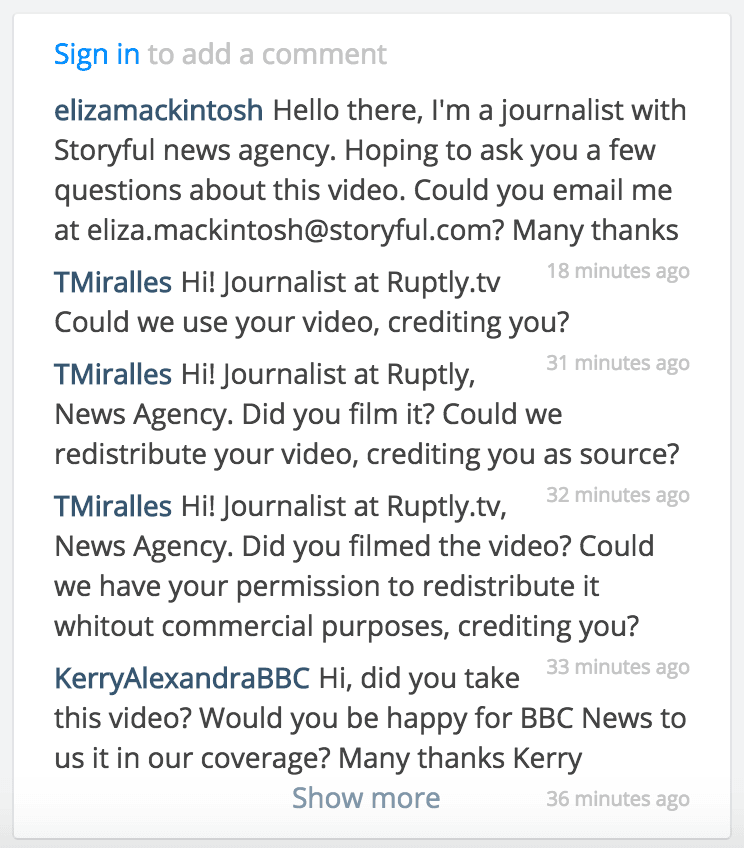 It’s worth remembering, however, that the date and veracity of this and other posts are almost impossible to verify, and their link to Brexit and the referendum is unclear at best.

This did not stop the Prime Minister from condemning the “despicable” alleged rise in “hate crimes” in Parliament yesterday.

“In the past few days we have seen… verbal abuse hurled against individuals because they are members of ethnic minorities,” he claimed in the House of Commons chamber.

The ‘Worrying Signs’ project was started by three young activists who, according to their social media footprints, strongly backed the UK remaining in the European Union.

Founder Sarah Childs has an EU flag on her profile picture and confirmed with ITV news that she voted Remain.

Her page has been such a success that she recently explained how “we’ve grown to such a large community in short a short space of time” such that the moderators are struggling to stay “on top of all the discussions”.

The wall of the Facebook group is filled with hundreds of hyperbolic and alarmist comments, as the reports of mean tweets and comments continue to pour in.

“The recent spike in racist attacks following the Brexit fills me with dread…. What’s happening now is just about as bad as the KKK or the Nazis running riot. It feels like the stirrings of a civil war or much worse,” wrote contributor Ahmad Rizudin Izzudin.