Recently propped up by a capital group affiliated with the mass migration, liberal super-funder George Soros, the case against the newspaper is now looking to be one of the highest profile in recent Polish legal history.

Tyrmand, who has written at length about Mr. Soros’s attempts at destabilising the rightward shifting democratic Poland, has been accused of “mafia membership” and “sympathy for [Vladimir] Putin” – particularly heinous charges in Poland, a country that still wrestles with its historic relationship with the former Soviet Union.

Since the post-Communist transition in 1989, Gazeta Wyborcza  – comparable to Britain’s Guardian or the U.S. Washington Post – has sponsorship and subsidy from successive, left-leaning Polish governments. Their slant has been reaffirmed by editor-in-chief Adam Michnik, a one-time Solidarity dissident and strident left-wing activist.

The paper’s dominance has scarcely been challenged in over a quarter of a century. That is until last year, when Poland definitively voted in a right-of-centre, mildly Eurosceptic conservative party. With Gazeta Wyborcza now under threat, they have lashed out at those who they perceive are to blame for the defeat of the left-wing establishment, including Mr. Tyrmand.

Tyrmand, for instance, wrote an investigative article published by Breitbart News on May 19th, revealing relationships around the newly formed Komitet Obrony Demokracji (KOD) movement, which has repeatedly failed to undermine the current Polish PiS (Law and Justice) conservative government.

According to Polish expat and Breitbart News contributor Przemek Skwirczynski: “KOD continually works to undermine the new democratically elected government alongside Fundacja Batorego (Stefan Batory Foundation) which was set up by George Soros himself in 1988 and is funded by Soros’s Open Society Foundations.

“The article by Tyrmand was quoted widely by the Polish media, and on May 28th Gazeta Wyborcza decided to write a “hit piece” laden with lies, innuendo, and fabrications about Tyrmand.”

And so closely are Gazeta Wyborcza and the KOD group aligned that the former is known to run donor solicitations for the political activist group. It is a relationship almost identical to the one the Soros-funded Hope Not Hate group in the UK enjoys with the Daily Mirror newspaper.

Gazeta Wyborcza’s late–May editorial, written by Tomasz Piątek, attempted to discredit Tyrmand by accusing him of “belonging to Trump’s stable” with the latter “declaring his sympathy for Mr Putin”. Tyrmand however is a well-known, long-standing supporter of Republican Senator Ted Cruz, switching allegiance to Mr. Trump when he had all but secured his party’s nomination, like most Republicans in the United States.

Mr. Piątek also attacked right-of-centre papers that Tyrmand has contributed to, such as Wprost and Do Rzeczy. Piątek alleged that these right-of-centre media were “owned by ex-communists” and “perhaps even KGB collaborators linked to Gazprom” as well as “various post-communist Polish outfits”.

He drew negative parallels between Matthew and his late father Leopold Tyrmand, considered a national treasure in Poland on account of his literary and anti-Communist dissident work. Mr. Piątek went so far as to insinuate that Matthew’s supposed “far-right” links were tantamount to a “mafia membership”, suggesting his late father would have disapproved.

Mr. Skwirczynski comments: “Given Gazeta Wyborcza is without a doubt THE establishment newspaper in Poland, such reckless behaviour in running a highly emotional, badly or straight-out unsubstantiated hit article is unacceptable in a free society where rule of law regarding infringement of personal rights proliferates”.

On June 8th the news broke that George Soros had invested in Gazeta Wyborcza by way of a fund he supports, buying shares in the newspaper’s parent company, Agora. The Soros-funded Media Development Investment Fund (MDIF) now owns an 11.22 per cent stake in the newspaper’s holding company.

MDIF bizarrely accepted reduced voting rights on the company’s board – an unconventional move for an “investor” in a struggling business.

And MDIF itself declares that it “has invested more than $153 million in over 100 independent news businesses in 39 countries since 1996” and so is clearly a substantial global player. It also lists Soros’s ideological outfit, the Open Society Foundations, as one of its investors, further mentioning that their “big bang” moment with reference to obtaining seed capital was attributed to George Soros in 2005. 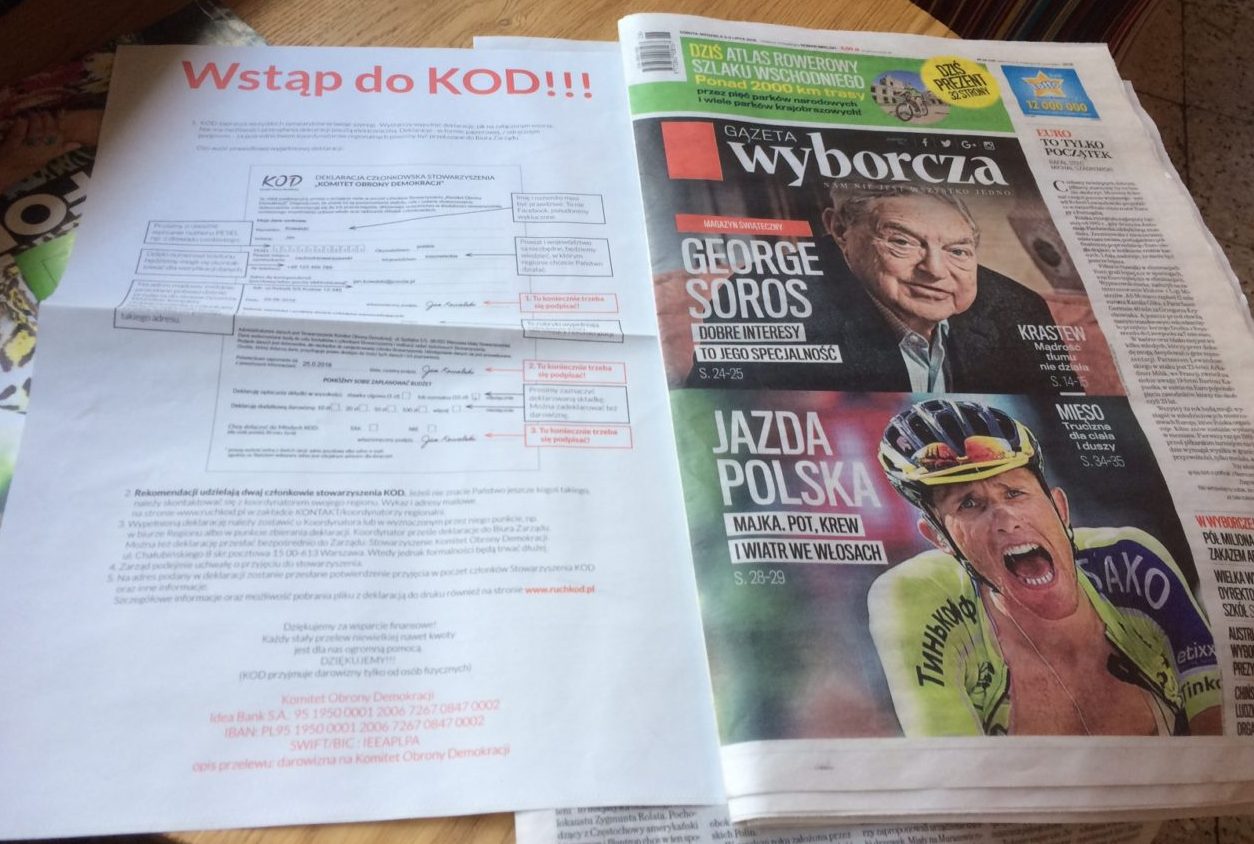 Shortly after the Soros investment came a front page featuring the Hungarian American without a disclosure of his affiliate fund’s new stake in the paper. The call for support for the Soros-affiliated KOD group was also inserted into that edition of the paper

Skwirczynski told Breitbart London: “MDIF gives itself cover by stating that they ‘invest’ in the media in places where they claim free press is under assault. This is the charged aimed by the political establishment at the new Polish government. It is a fraudulent claim peddled by self-interested post-Communist elites who were turfed out of power”.

Mr. Tyrmand believes the chain of events above is far from accidental or coincidental. Another well-known Polish journalist Dawid Wildstein pointed out the irony in the establishment media suddenly becoming the hunted; “sued by a Jewish New Yorker” he notes with reference to Tyrmand’s Polish-Jewish heritage. The case, he recognises, could turn into a global story overnight.

Tyrmand told TVP, a Polish national television channel, that he intended to take the alleged defamers to court in order to “open up a public debate regarding the role of the media in Poland as well as the influence of George Soros on the Polish media and, by extension, on the public opinion in Poland”.

He added: “…media should have the duty to check their facts and therefore must be held accountable if they fail to do so or they intentionally spread easily verified false information with intent to do reputational damage”.