The Polar Ocean Challenge expedition – aka Ship of Fools II – has escaped from the Arctic by the skin of its teeth.

It was supposed to show how amazingly navigable the Arctic Circle has become now that climate change is supposedly melting the polar ice caps at a dangerous and unprecedented rate. But according to one observer who has followed their progress closely (see comments at Paul Homewood‘s place), the intrepid explorers – including a 14-year-old boy – came within just two days of calamity, after being hampered by unexpectedly large quantities of a mysterious substance apparently made of frozen water.

The southern NWP route is now closed at the NE exit, with northern Prince Regent Sound blocked by 9/10 ice in freeze up mode. Exactly where they barely made it through after hours of probing on 9/12. Northabout made it through NWP with just two days to spare. Had they taken the planned 2 days resupplying in Barrow rather than 1, and the planned one day call at Cambridge Bay (meeting up with Polar Bound), they would not have made it out and would have had to turn around and overwinter at Cambridge Bay. It was that close.

You’d never have guessed this listening to the expedition leader David Hempleman-Adams on the BBC yesterday. Though he admitted the journey had been a close-run thing, he maintained heroically that all that extra ice he had encountered was not a sign that the climate alarmists had got their predictions wrong.

“We’re not scientists. We weren’t collecting data. It’s wrong to suggest that this adventure will show that there’s less ice,” he explained – or rather tried to explain. “All we’re trying to do is to make people more aware of the hundreds of scientists doing good work who actually do show that.”

So, on the one hand, Hempleman-Adams is asking that we see him as a rank amateur with no scientific expertise. And on the other, almost in the same breath, he is asking us to trust his judgement that there are “hundreds of scientists” who claim the Arctic is melting at unprecedented speed are doing “good work.”

How exactly does he know this?

Well the answer is, he doesn’t. Clearly he doesn’t because if he’d done his homework, he’d find that far from shrinking at dangerous rates predicted by loons like Cambridge University’s house climate loon Peter Wadhams  Arctic Ice has already passed its minimum this year (earlier than usual) and is now growing at a quite terrifying lick. 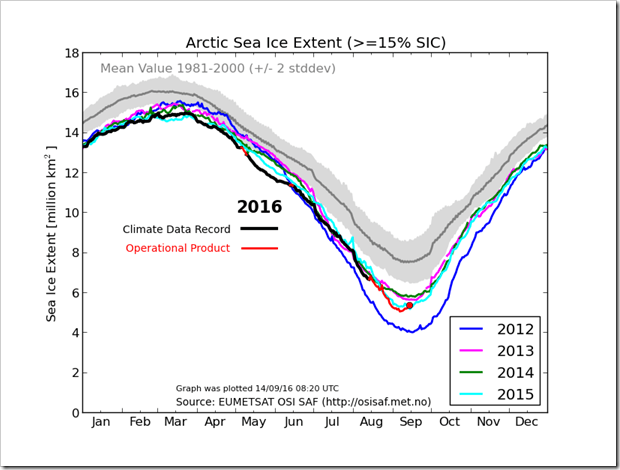 It is now safe to confirm that the minimum Arctic sea ice extent has now been passed this year, with an area of 4.083 million sq km on 7th September.

This is 22% greater than in 2012, despite two major storms in August that led to break up of ice.

The ice has been regrowing remarkably rapidly for the last week, and already stands above the start of the month. Tentatively, we may be seeing one of the fastest September growths on record.

It’s also the earliest minimum since 1997, indicating that the Arctic is currently experiencing a very cold spell.

Needless to say, this is not the version of events you are seeing reported in the mainstream media.

By far the worst culprit, though, in perpetuating alarmist myths is the BBC which has just produced this emotive video claiming that a “3 million year ice age is coming to an end” making it harder for polar bears to find food on the shrinking ice.

When the history of the great late 20th/early 21st century climate scare is written, no institution is going to emerge with less distinction than the BBC.