Concerns have been raised that adult migrants are posing as children to gain entry to the UK, as it has emerged that the Home Office has no way of verifying the ages of child migrants being relocated from the Calais Jungle.

The first group of fourteen teenage migrants arrived in the UK yesterday, under the government’s new scheme to fast track entry of minors with connections to the UK from the Jungle before the migrant camp is demolished by the French authorities.

But photos of the ‘children’ appear to show young male adults.

The Home Office has insisted that it has verified the ages of the migrants and that they are all aged between 14 and 17.

However Home Office documents reveal that where identifying documents such as a passport are not available, a screening officer can only certify a migrant as a child based on their “physical appearance” or “demeanour”, The Telegraph has reported.

Conservative MPs have raised concerns that the photographs of the migrants arriving in the UK appear to depict people above the age of 17.

David Davies, the Conservative MP for Monmouth, said: “These don’t look like ‘children’ to me. I hope British hospitality is not being abused.” 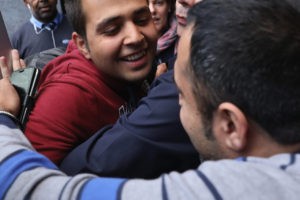 Jan Ghazi, (front right) greets his nephew Haris (centre) who arrived from in the UK today after leaving the Calais ‘Jungle Camp’ (Photo by Dan Kitwood/Getty)

He added: “I’m all for helping the genuine children but the well of goodwill is rapidly being exhausted here.

“I’m also curious that there are no young women – I would have thought they would be much more vulnerable. I worry that once again British hospitality is being abused.”

The Home Office documentation states that migrants “should be treated as an adult if their physical appearance/demeanour very strongly suggests that they are significantly over 18 years of age”, but adds “all other applicants should be afforded the benefit of the doubt and treated as children”.

This means that migrants in their 20s may be allowed to take part in the programme by masquerading as children, as has been shown to be the case elsewhere in Europe.

Yet materials distributed by charities who have urged the government to take in more minors commonly depict children under ten. A report by the Red Cross on the plight of child migrants in Calais, No Place for Children, exclusively features toddlers and young children almost all of whom are girls. 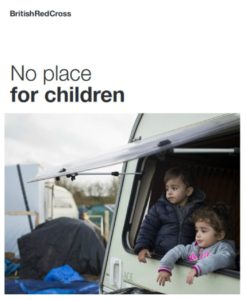 The cover of the British Red Cross’s report No Place for Children. Only young children feature in the images within the report.

On Monday the Red Cross issued a statement saying it was “proud to be helping to finally bring these children, who have been fending for themselves in conditions unimaginable to most adults, to the UK to be reunited with their families and be given the care they need and deserve”.

Thanks to the pressure put on the government by the Red Cross and other organisations, dozens more children are set to arrive in the UK over the next few days after a team of British officials were dispatched to Calais to assist the French authorities in speeding up the process.

But Davies said tests should be applied to ascertain the true age of the applicants. “There is no way of knowing if someone is a child,” he said. “We could end up causing even more misery if we are not careful.

“We should invite anyone who wants to come to the UK to take dental tests.”

A Home Office spokesman said: “We can confirm a group of children who left the Calais camp this morning have arrived in the UK.

“These vulnerable children, aged between 14 and 17, were transferred to the UK under the care of Home Office staff, with the support of volunteers from specialist NGOs and charities. They will join their families in the UK as quickly as possible over the coming days.”