The integrity of the ballot to select the next leader of the UK Independence Party (UKIP) was called into question after the party had to open up voting via e-mail for those who have failed to receive ballot papers.

Breitbart London has received numerous complaints from UKIPers stating they were not receiving their ballot papers to vote in the leadership election despite being long-standing members of the party.

We have now seen evidence the party is accepting votes via e-mail for an undisclosed number of people who failed to receive their papers in the post. The news has been confirmed an official UKIP spokesman.

But the party also denies the problem is widespread, and claims that the current leadership election has fewer ballot problems than any previous contest.

A spokesman told Breitbart London: “There are no issues with the integrity of the poll. Whilst there have been a number of complaints about ballot papers being missing the large majority of those complaints were solved by the simple expedient of waiting for the post to arrive.

“In a few limited cases, significantly fewer than in previous leadership elections there have been issues to do with incorrect addresses. In these cases, to ensure that every member has a vote then individuals have been allowed to cast their vote by email as is right and proper”.

But one candidate, John Rees-Evans, has pushed back against this claim, stating: “I do not wish to apportion blame to individuals for these discrepancies. I’m afraid they are symptomatic of the institutional poor-management and corruption of an organisation which needs a complete overhaul and comprehensive reform, something which becomes clearer by the day.

“It is clear the whole election process has been compromised. The only remedy for the issues involving the missing or multiple ballot papers would be for the party to reissue them on different colour paper using an independent organisation contracted to do so, and which would be legally liable for any mistakes. The party should also issue an email to all members with links to each of the candidates’ websites to redress any unfair advantage given by party officers or MEPs misusing databases to promote their favoured candidate.”

Commenting on the matter, former leadership candidate and Breitbart London editor Raheem Kassam said: “I called the integrity of this ballot into question when I dropped out because I was informed by reliable sources the returning officer was not fit for purpose, and was intent on crowning one of the candidates, his close friend.

“Now it appears I have been proved correct. It is worth nothing that if, as the party claims, their own ballot mail-out operation is less flawed than that of the Electoral Reform Services, then why are they using ERS to count the ballots? Something doesn’t smell right.”

In addition to the ballot issues, UKIPers are also complaining about breaches in party rules surrounding the election given that MEPs and party representatives with official party databases are using contact information for members to endorse candidates.

People are now receiving the following e-mail, which it is argued denies the secrecy of their ballot and which critics have noted is “open to abuse”: 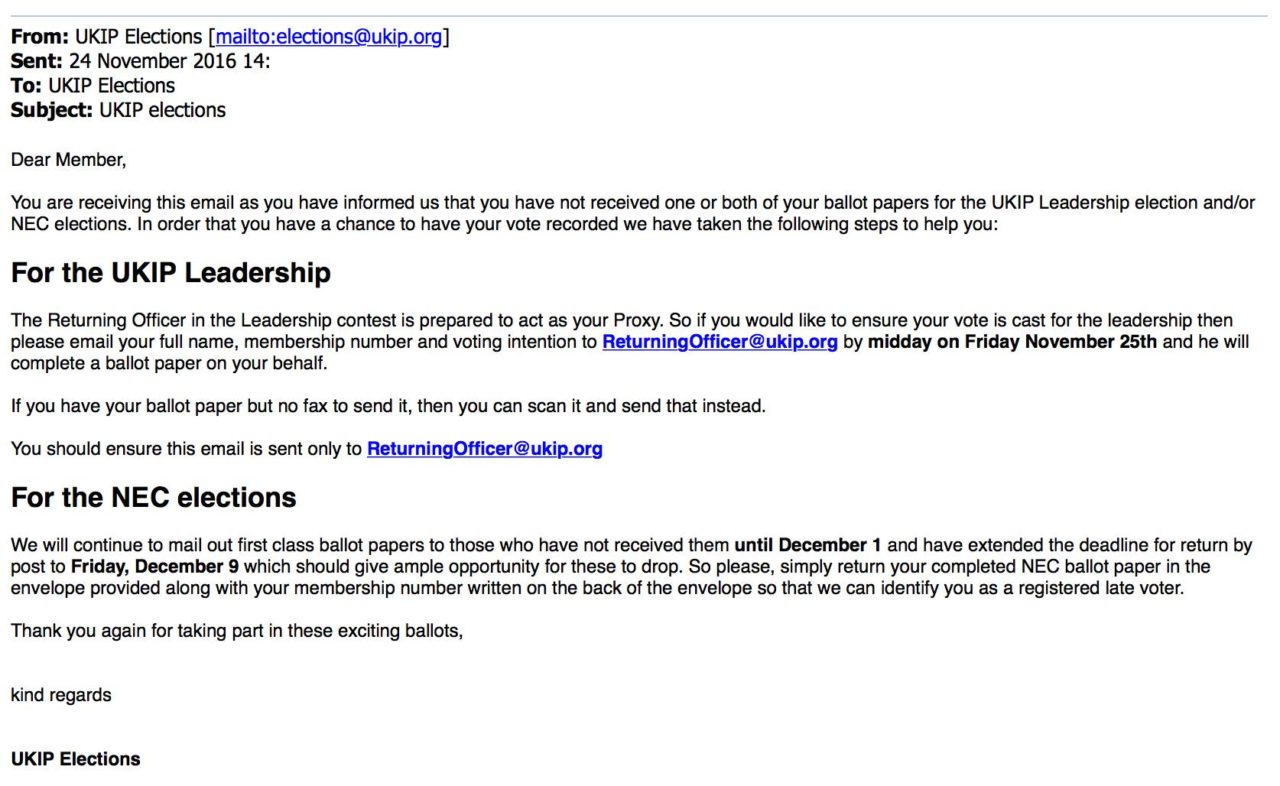