An LGBT rights group has sparked controversy after distributing material to Spanish preschools and primary schools that speaks of “trans animals”.

The guide, named “It’s Natural: Diversity in the Animal Kingdom“, has been produced by the Andalusian Rainbow Federation and sent out to primary schools across the region of Andalusia. The group says they intend to show “real examples transsexuality, intersexuality and homosexuality” in various species of animals.

Gonzalo Serrano, the group’s president, said: “We have paid much attention to the language and to the images because we want to communicate that in the most natural way possible that sexual diversity exists in nature, but with using terms that will not lead to children asking more questions.”

It takes the form of a calendar, with each month featuring images such as drawings of two male lions stroking one another (January), two female albatrosses forming a couple (February) and two male giraffes kissing (September).

The September page adds that there are people who do not like knowing that some male giraffes prefer other male giraffes, and “don’t want us to find out”. 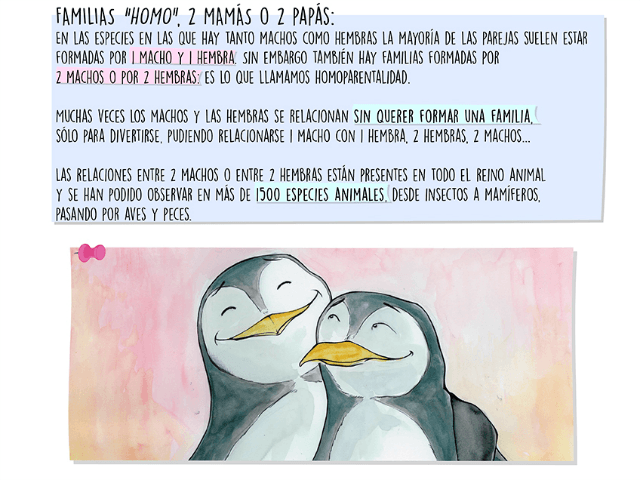 It also refers to species that are naturally hermaphrodites and “trans animals” such as the clownfish, which naturally change sex as they grow older, and tries to relate this to human transsexualism.

The guide also suggests using material from other sources including Greenpeace, and suggests celebrating special days such as the “Happiness Day”, “Diversity Day”, and “Smile Day”.

Breitbart London reported last week on a poster campaign across northern Spain depicting naked children with genitalia of the opposite sex.

The campaign, funded by an anonymous American donor, featured the tagline “Some girls have penises, some boys vulvas. It’s as simple as that.”

The donor handed a campaign group €28,000 (£24,000/$30,000) after hearing about a previous campaign that involved distributing material to schoolchildren in eight languages.