About forty South Korean tourists were robbed in Paris at the weekend when men climbed aboard their coach shouting threats.

Witness statements from the event, described by South Korea’s leading news agency Yonhap as “ten minutes of horror”, revealed that one of the intruders threatened tourists on the coach with an object “resembling a glass bottle”.

The coachload of tourists were driving back to their hotel in Saint-Denis at the time of the attack. The neighbourhood is in close proximity to areas of Paris affected by ongoing violence as anti-police protesters riot over the assault of a black youth worker who alleges he was anally raped with a truncheon while being arrested.

The Yonhap report stated “the possibility of a link” between the robbery and the riots going on in the area had not yet been ruled out. 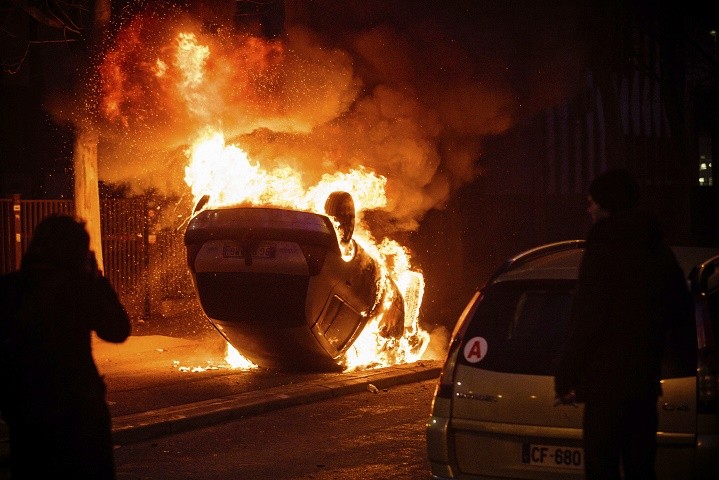 A car burns after a demonstration in Bobigny, Seine-Saint-Denis outside Paris, Saturday, Feb. 11, 2017. A peaceful demonstration protesting the alleged rape of a black youth by police has degenerated, with small groups setting at least one vehicle afire and throwing projectiles at police. (AP Photo/Aurelien Morissard)

An official at Seoul’s Ministry of Foreign Affairs stated: “These South Korean tourists had taken a bus after a visit to the Eiffel Tower and were on their way to Saint-Denis, the location of their hotel. Individuals suddenly boarded the coach and snatched the tourists’ Eurostar tickets, which were being kept by the tour guide, whose passport was also taken.”

Yonhap reports that “three or four black men” pressed an emergency button on the outside of the coach as the vehicle stopped momentarily, opening its doors.

Yelling as they boarded the coach, the intruders proceeded to threaten tourists with what is believed to have been a glass bottle, which they also used to “tap” the heads of passengers sitting towards the front of the vehicle, according to the Korean Embassy in Paris.

During the evening of the incident, there was a large gathering of 2,000 protesters with placards emblazoned with anti-police slogans in Bobigny, a neighbourhood near to the hotel where the tourists were to be staying.

The demonstration turned violent after just an hour with “violent incidents, broken windows, tear gas and burnt vehicles”, according to local media. The police headquarters in Paris reported that “several hundred violent and very mobile individuals” committed various crimes and caused damage to property in the city.

Last month Breitbart London reported that France has seen a steep decline in visitor numbers from East Asia amid surging violence and crime.

President of the Chinese Association of Travel Agencies in France, Jean-François Zhou, warned that “increasingly violent” thefts and assaults are turning France into “one of the worst destinations for foreign tourists”.

“In 2016, there were 1.6 million Chinese tourists compared to 2.2 million in 2015. The number of Japanese tourists dropped 39 per cent, and Koreans 27 per cent. Our tourists have turned to Russia, which is less attractive but at least it is a safe country. For Putin, it is an economic windfall,” he said.