Four in five Brits aged between 18 and 30 identify as British, compared to less than half who feel European, a post-Brexit vote poll has revealed.

Those in UKIP areas and the working classes were more likely to feel British, whilst those in London and the South of England purported to feel more European than in the North.

The survey of 1,994 young adults from England, Scotland, Wales, and Northern Ireland was commissioned by think tank Demos and supported by the British Council as part of the Next Generation project.

Researchers noted the areas where people felt more British tended to correlate with the parts of the country that voted to leave the European Union (EU).

British identity was strongest in the North-East, one of the most firmly Brexit backing areas of the country, where a whopping 93 per cent said they felt “to some extent” or “to a great extent” British.

Yet the areas with the highest number of people feeling European were London and Northern Ireland, which voted against Brexit and where 59 per cent identified with the continent. 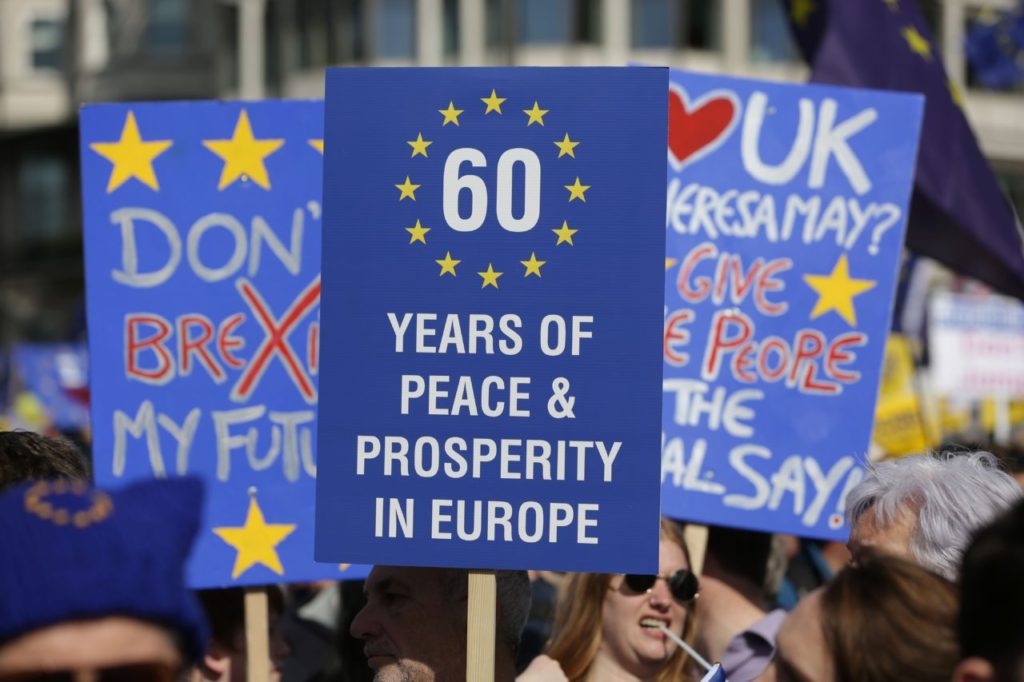 Demonstrators hold placards at an anti Brexit, pro-European Union (EU) march in London on March 25, 2017, ahead of the British government’s triggering of Article 50. (DANIEL LEAL-OLIVAS/AFP/Getty)

In Northern Ireland, which voted by 55.8 per cent to remain in the EU, the feeling of Britishness slipped to 62 per cent. In Scotland, which also voted to remain, just 59 per cent said they felt British.

In Wales, which voted to leave the EU, just 35 per cent said they felt European, the smallest proportion in the country.

The study also found that young people in lower socioeconomic groups were less likely to feel European, and those in Labour and UKIP areas were more likely to feel British.

Those in the South of England were also more likely to identify as European as those in the North.

Ian Wybron, head of social policy at Demos, told The Sun that those who felt more British had been “excluded” from opportunities to understand other cultures.

“But our research found that a substantial number of young adults are currently being excluded from these opportunities – particularly those from lower socioeconomic backgrounds.”