PARIS (AP) — Emmanuel Macron and Marine Le Pen are preparing for their one-on-one televised French presidential election debate, with much at stake for both contenders.

They are expected to square off for more than two hours Wednesday in their final showdown before Sunday’s runoff vote. 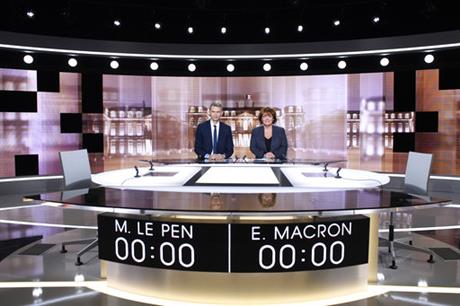 Journalists Christophe Jakubyszyn, left, and Nathalie Saint-Cricq pose Tuesday May 2, 2017 in La Plaine Saint Denis, outside Paris, shows the TV studio where French presidential candidates will debate Wednesday, four days before the vote for the second round. (Eric Feferberg, Pool via AP)

Macron, who has been criticized for his early celebrations after he finished nearly three points ahead of Le Pen in the first-round vote April 23, needs to convince leftist voters that his pro-business and liberal stance should not deter them from supporting him. Le Pen is expected to hammer home her favorite themes of security and identity.