BERLIN (AP) — German authorities allowed a popular rock festival to resume Saturday after a scare over people with suspected links to Islamic extremism prompted them to curtail its opening night. They said searches of the site turned up no suspicious objects.

A top security official said authorities had been obliged to put security first, hours after the Rock am Ring festival’s organizer said his event was “paying the price” for officials’ failure to prevent the December attack on a Christmas market in Berlin.

Authorities shut down and cleared thousands of fans from the three-day festival Friday evening, its opening night. Organizer Marek Lieberberg said 86,000 people left the site within 15 minutes without incident. 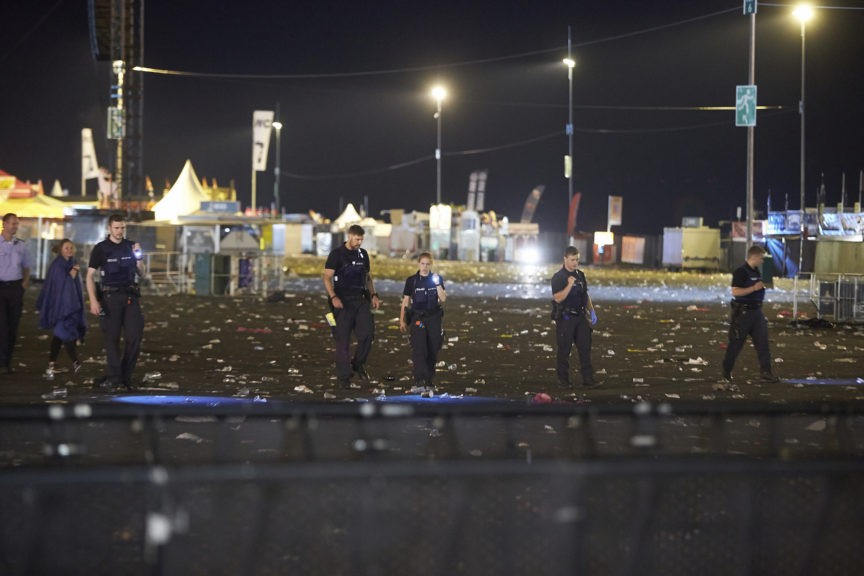 Police search the area near the main stage of the rock festival ‘Rock am Ring’ near Nuerburg, Germany, early Saturday, June 3, 2017. (Thomas Frey/dpa via AP)

Police found out on Friday that “at least one person of non-German origin on which there was police information in the area of terrorism had access” to secure areas at the event, Koblenz police chief Wolfgang Fromm told a news conference. The backstage passes didn’t match those people’s real names, he added.

That prompted officials to halt the festival at the Nuerburgring racing circuit in western Germany. Three people were arrested Friday night and their apartments searched; all were released early Saturday, though they remain under investigation.

Roger Lewentz, Rhineland-Palatinate state’s interior minister, said that “the safety of visitors stands above everything — that is the maxim, and there can be no other.” He said that “we can take no risks.”

Following the recent attack in Manchester outside a concert, strict security controls were already in place and authorities had put in place 1,200 police officers.

In a late-night rant after the evacuation, organizer Lieberberg said that “we are paying the price for the scandal over (Anis) Amri,” who drove a truck into a Christmas market in December, killing 12. The rejected Tunisian asylum seeker had been on authorities’ radar, but wasn’t arrested.

Lieberberg also called for Islamic extremists deemed dangerous to be arrested and said he wanted to see “demonstrations against these violent people.”

“So far I haven’t seen Muslims taking to the streets in their tens of thousands and saying, ‘what are you doing?’” he said.