Placards carried by former Muslims and allies at the London Pride march at the weekend have triggered a complaint from an Islamic group who claim the messages displayed are “Islamophobic”.

A spokesman for the East London Mosque confirmed that a complaint had been lodged with both the organisers of London Pride and the Council of Ex-Muslims of Britain (CEMB), the organisation responsible for the signs.

London’s Evening Standard reports the remarks of spokesman Salman Farsi, who said the placards, which included slogans such as ‘Allah is Gay’, ‘F*ck Islamic Homophobia’, and ‘Ex Muslim & Proud’, incited hatred against Muslims. 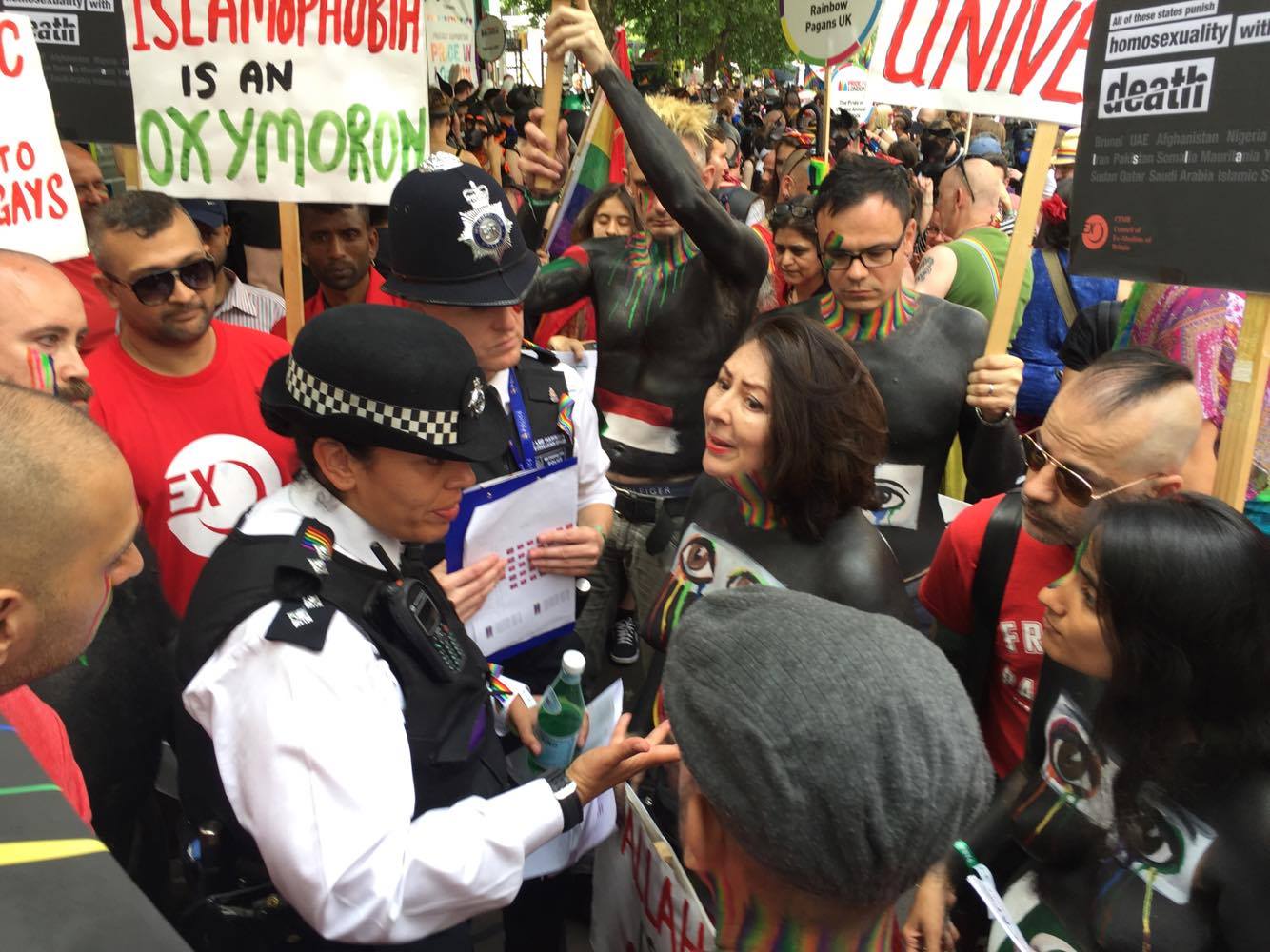 Rights campaigner Maryam Namazie is confronted by police at Gay Pride for the ‘Allah is Gay’ placards carried by her group / https://www.ex-muslim.org.uk/

Farsi complained of the signs within the world-famous gay pride event: “For us to see such a mainstream event that is supposed to celebrate tolerance and love used as a hate platform was really quite shocking.

“One of the signs said ‘Islamophobia is an oxymoron’.

“Our religion doesn’t promote hatred or homophobia. Yes, there might be theological topics dealing with homosexuality in Islam, but that’s clearly very separate from promoting hatred and homophobia.” 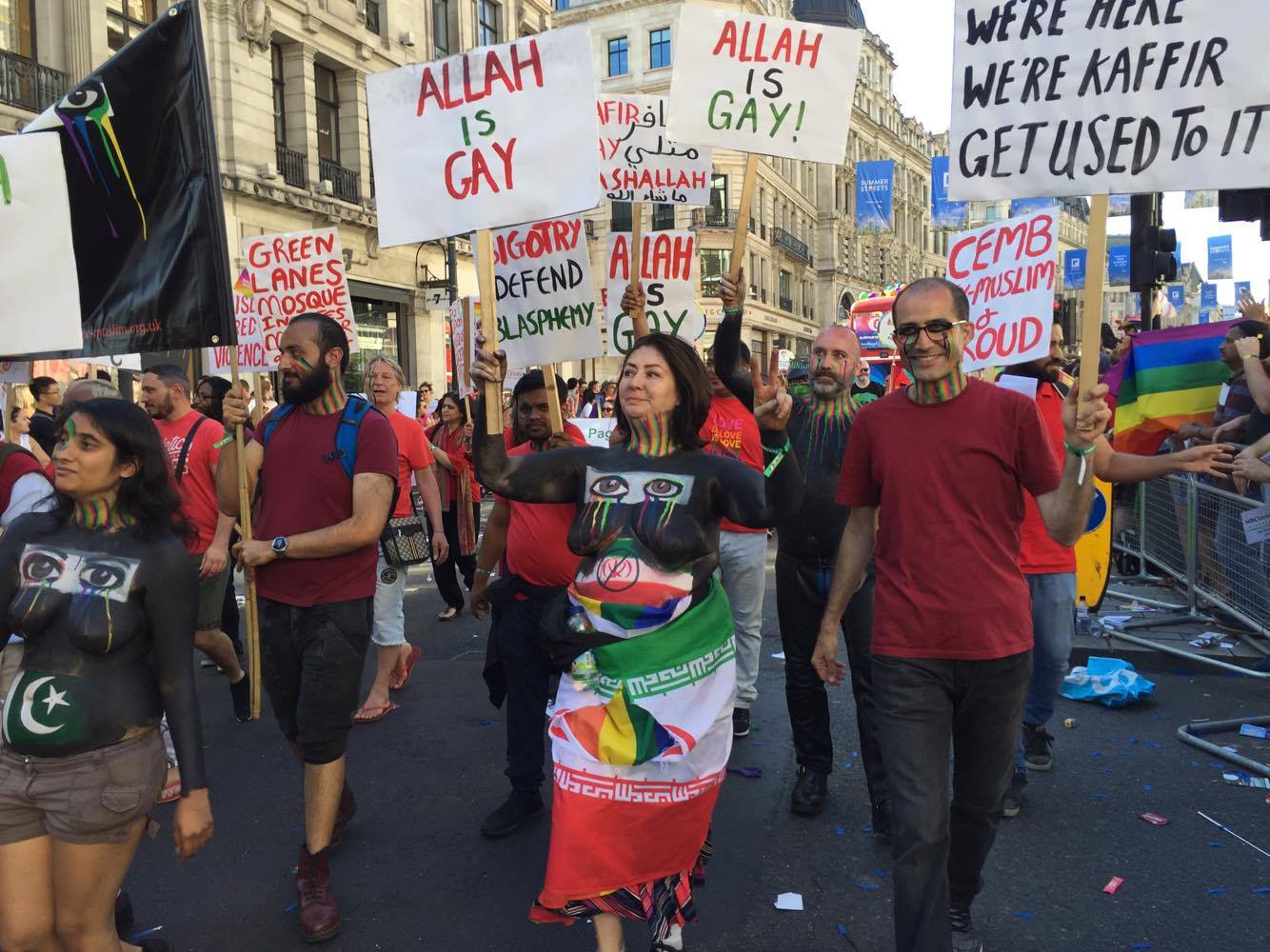 While it has taken nearly a week for the complaint to surface, CEMB revealed they had met some opposition on the day in their own account of events.

In a blog post on their website, the group said: “CEMB was at Pride in London in full force highlighting the plight of LGBT in countries under Islamic rule.”

“The march went ahead as planned, though police initially tried to remove placards with the slogan ‘Allah is Gay’ because of complaints of ‘offence’.

“Whilst a few were not pleased to see apostates in Pride, we were met with overwhelming and heart-warming support and solidarity.”

In addition to placards with other slogans like “We’re Here, We’re Kaffir, Get Used to It”, some also wore body art depicting crying eyes trapped behind the burqa shroud. 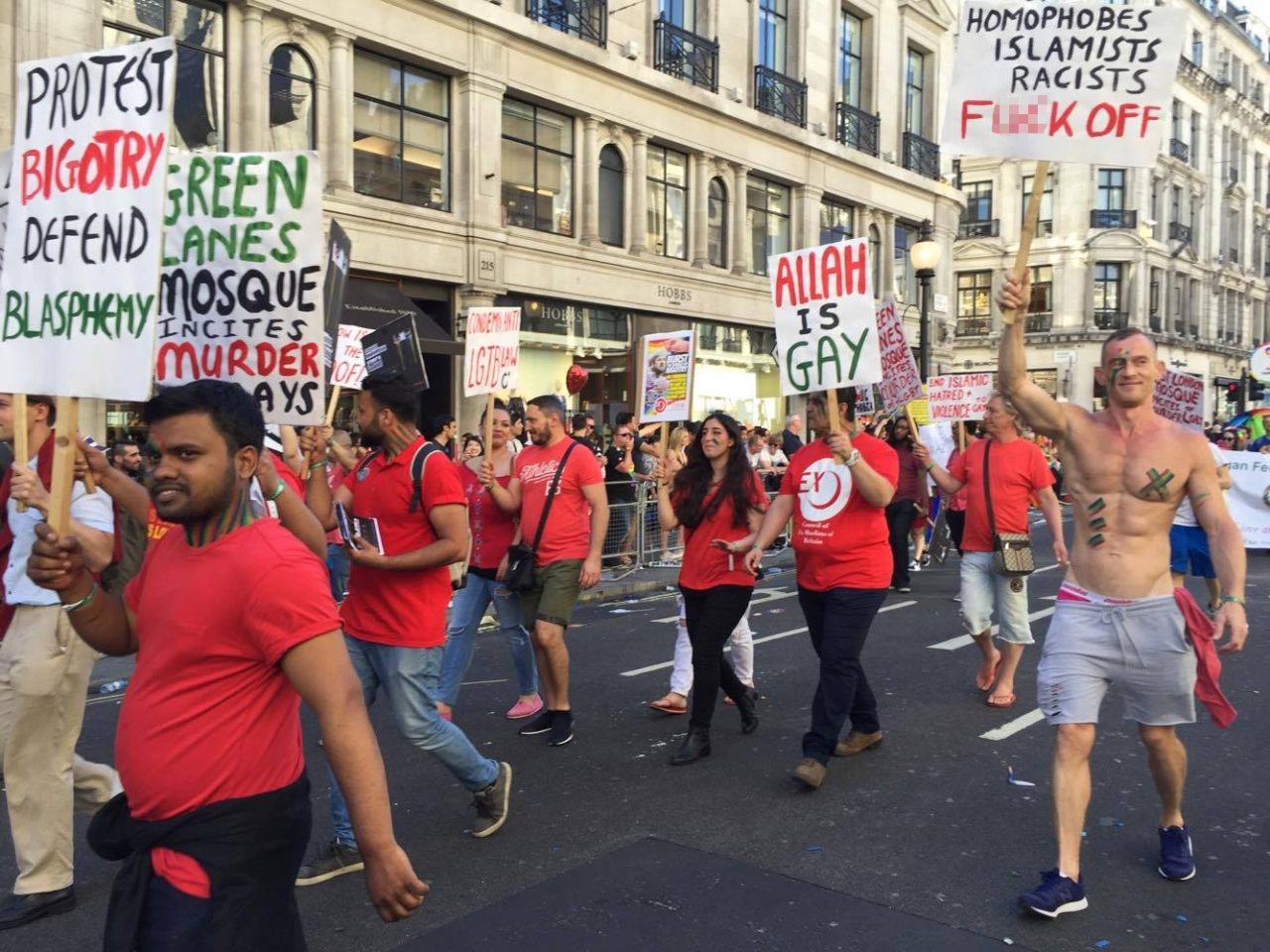 Responding to what she described as “back and forth” with police officers who wanted to remove their ‘Allah is Gay’ placards, CEMB spokesman Maryam Namazie said: “Pride is full of ‘God is Gay’ and ‘Jesus Had Two Fathers’ placards as well as those mocking the church and priests and pope, yet hold a sign saying ‘Allah is gay’ – as we did – and the police converge to attempt to remove them for causing offence.”

The organisers of Pride itself said of the incident “We will not tolerate Islamophobia” and that they were now reviewing whether they’d allowed CEMB to join the march again next year.

The controversy from the Islamic community over ex-Muslims marching at Pride comes just days after Britain’s first married gay Muslim couple went public with the high level of abuse they had received from other Muslims.

The Daily Mail reported one of the pair  as saying: “I know that Islam will never accept homosexuals. It is written there in black and white. But this is how I chose to live my life.”