European president Donald Tusk has rebuffed the offers made by British Prime Minister Theresa May while standing outside 10 Downing Street Tuesday, saying Britain would not be able to “have your cake and eat it”.

The straightforward message of the senior Eurocrat to Britain as he departed the prime minister’s residence, having had a sit-down talk with Mrs. May was that despite her attempts to appease the European Union with a promise to keep Britain in the EU for two extra years with a transition period and to pay out an unspecified Brexit Bill, that was not enough.

Because Britain had not given into enough of the European Union’s demands during the negotiations so far, there could be no chance of talks proceeding onto areas that British negotiators are most keen to discuss: trade. 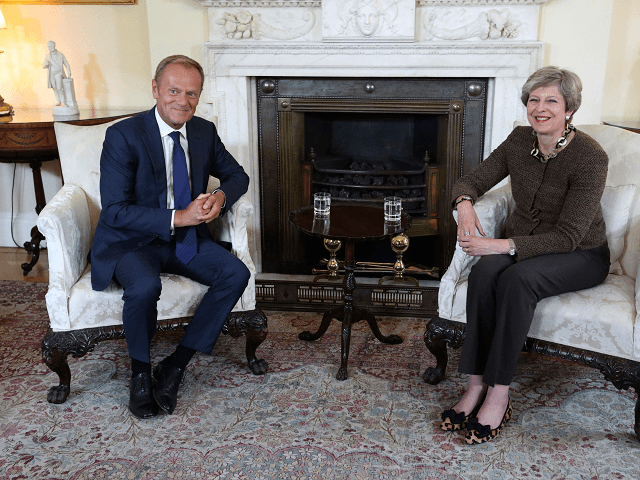 Donald Tusk smiles for a photograph at 10 Downing Street before talks with the British Prime Minister. Shortly after he told waiting journalists that May’s Florence speech, which was labelled a ‘betrayal’ by some, did not go far enough to satisfy the European Union / AP IMAGES

The leader did, however, praise Mrs. May for starting to break down to the EU’s demands during her Florence speech last week, remarking that it was “constructive and more realistic”, and most importantly demonstrated “the love affair with having your cake and eating it has come to an end, at least I hope so. That’s good news.”

Encouraging Prime Minister May to make further concessions to the bloc, the Polish politician turned European Union president said: “We will discuss our future relations with the UK once there is so-called sufficient progress”, emphasising that sufficient progress had not yet been made.

May’s Florence speech Friday, which was so positively received by Tusk and others in the EU, went down very poorly with key Brexiteers in the United Kingdom. Speaking to Breitbart London shortly after the speech, Brexit leader Nigel Farage said: “In trade, security, science, she proposes no change whatsoever.

“And finally, most tellingly she said ‘we do not seek an unfair competitive advantage’. That statement is a sell out of our national interest, and a betrayal of Brexit.”