A 17-year-old girl was sexually assaulted on three separate occasions by up to five men in the space of an hour on her walk home, Metropolitan Police have said.

The Met believes the victim was attacked three times between around 23:55 hrs on Friday, September 29th, up to around 00:55 hrs on Saturday, September 30th, after she became separated from her friends after visiting a nightclub in Tower Hamlets, East London.

Two of the three assaults are considered “very serious sexual assaults”. Detectives said it is possible she was drugged, and investigators are carrying out toxicology tests.

She was trying to get home to central London when she was attacked in quick succession by suspects designated by police as 1, 2, and 3. So far, police have only been able to obtain clear CCTV footage of suspects 2 and 3; footage of suspect 1 is of too poor quality to be released, but he was described as wearing dark clothing.

Appeal to ID 2 men after a 17-yr-old girl was sexually assaulted 3 times on her way home after a night out. Call 101/tweet @MetCC with info pic.twitter.com/x4usAYehgR

The teenager’s ordeal began when she was picked up on camera being carried by suspect 1 on Cambridge Heath Road and they were seen to go into a doorway after which the man is not seen again on camera. Items of the top half of the girl’s clothing were later found at the location.

After midnight, CCTV picks up the girl stumbling down Mint Street being followed by suspect 2 – a bearded male on a racing bicycle. Footage reveals suspect 2 following the girl down two roads (Mint Street and Three Colts Lane) before he approaches her. After a second camera catches suspect 2 walking away from the girl, she emerges from Corfield Street, her clothing appearing in disarray.

CCTV captures suspect 3 walking down Corfield Street and joining two other individuals. He then appears to bend down towards a spot on the kerb in between some parked cars. Detectives believe it is at this point where the victim was sexually assaulted. 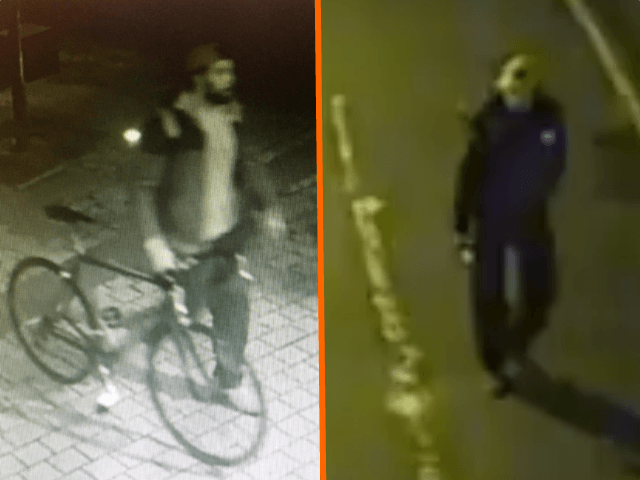 (L) Suspect 2 is bearded and was wearing a backwards baseball cap, a two-tone hooded zip jacket, dark trousers, and a bag on his back. (R) Suspect 3 has a distinctive gait, which gives him the appearance of walking unevenly and perhaps being slightly bow-legged.

After the assaults, a passerby found the distressed girl lying on the ground and calls the police.

Detective Inspector Suzanne Jordan, from the Met’s Child Abuse and Sexual Offences Command, (CAS0) said: “This is a horrific multiple sexual assault on a young female who was simply making her way home after a night out. We would like to thank the members of the public who intervened to help her and possibly prevented her ordeal from continuing even further.”

“We believe two of the three were very serious sexual assaults indeed, and are determined to catch the persons responsible for these hideous crimes. I would urge anyone who recognises either male in these images to contact us as a matter of urgency.”