Between 2016 and 2017 there was the largest ever rise in reported “hate crimes”, yet the number of prosecutions actually fell.

The massive rise in reports but fall in prosecutions, recorded in the Crown Prosecution Service (CPS) Hate Crime Annual Report, could suggest some of the additional reports are less credible, meaning they do not make it to court. 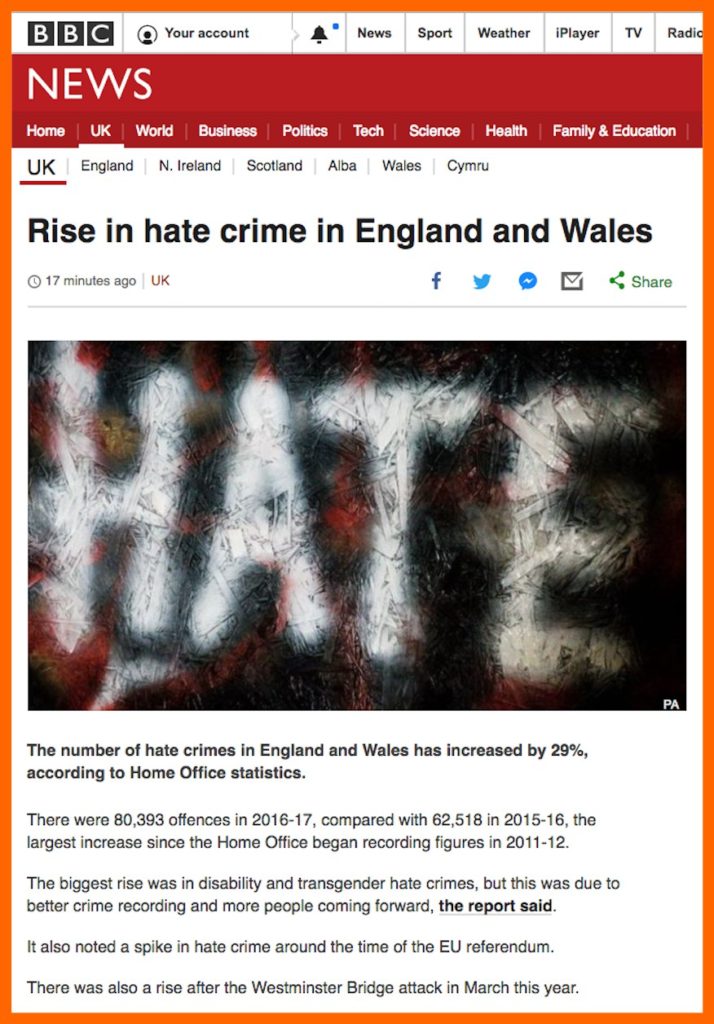 CPS guidelines stress that “hate crimes” only need to be “perceived” by the “victim,” can include “offensive comments,” and “no evidence” is needed to record them.

The BBC’s reporting on the statistics described a rise in “hate crimes,” rather than “reported hate crime,” and did not mention the fall in actual prosecutions.

Director of Public Prosecutions Alison Saunders said: “The drop in referrals recorded last year has impacted on the number of completed prosecutions in 2016-17.

“And we are working with the police at a local and national level to understand the reasons for the overall fall in referrals in the past two years.”

The rise in reports also follows the European Union (EU) referendum vote and a coordinated campaign by pro-EU activists to encourage hate crime reporting which could be linked to the Brexit campaign.

The Home office said: “Due to the widespread reporting of and interest in hate crime around the time of the EU referendum, information has been included in the statistical bulletin on the levels of hate crime recorded around the referendum which took place on the 23 June 2016.”

Following the Brexit vote, Police dismissed media claims that there had been a 57 per cent rise in “hate crimes”, as the figure related to a rise of just 31 unverified claims made on the True Visions website in a 96 hour period when compared to the previous year.

The statistics also reveal that reported “hate crimes” are increasingly linked to identity politics. In 2016-17, 52 per cent of cases involved “hostility on the grounds of race, religion, sexual orientation, disability or transgender identity.”

Yet, back in 2007-08, when the CPS began compiling the report, just 2.9 per cent of case related to these protected categories.

Mrs. Saunders commented: “Crimes motivated by hate have a corrosive effect on society and it is pleasing to see the courts are using their powers to increase sentences in the majority of cases for the first time.

“Sentence uplifts are important because they demonstrate that the CPS has built the case effectively, the hate crime element has been recognised and the perpetrator has received a more severe sentence as a result.

“The significant increase in uplifts since 2007 reflects the hard work of the CPS and police to present these cases in court and we aim to increase the proportion even further by 2020.”

Authorities are continuing their drive to encourage ever more “hate crime” reporting and prosecutions, announcing a national police unit dedicated to catching internet ‘trolls’ this month and a London police initiative in Mosques just this week.