British city Hull has followed the growing European trend of dressing up anti-terror barriers as fun Christmas decorations in an effort to hide the “ugly barriers”, as the continent entrenches itself against a spate of radical Islamist terror attacks.

Because cast reinforced concrete has not traditionally been a recognised part of the Western Christmas aesthetic, many local authorities across Europe have taken steps to soften the visual impact of the anti-vehicle barriers, now made necessary to protect large gatherings of people from terror attacks.

While large gatherings of people of all kinds have been targeted by terrorists in recent years across Europe, the December 2016 attack against the Berlin Christmas market has provoked a particularly visible response after asylum seeker Anis Amri murdered a Polish lorry driver, hijacked his vehicle, and drove into the Christmas Celebration, killing 11.

Breitbart London reported Saturday that many European nations including Germany and the Netherlands had taken to decorating and hiding the anti-terror blocks from view, either painting them bright colours to make them resemble Lego blocks or wrapping them in fabric so they look like gifts. The resemblance of some blocks to Lego and the responsibility the German chancellor has had for bringing the sudden surge of mass migration to Europe — and with it some believe a spike in radical Islamic Jihad — have led some to christen the defences ‘Merkel Lego’.

Anti-terror bollards in Queen Victoria Square have been wrapped and packaged as Christmas presents ahead of the city’s light switch-on.

The bollards outside the Maritime Museum and Hull City Hall have had a makeover and now resemble presents underneath Christmas trees.

The concrete blocks aren’t the only anti-terror measure and strange sight at Europe’s Christmas markets. As Breitbart London reported in the wake of the December 2016 attack, heavily armed soldiers and police patrolling the festive pop-ups had become a regular sight.

Europe has seen a surge of such vehicular attacks in recent years, in which ordinary passenger of freight vehicles are driven into pedestrians at high speeds to cause maximum death and chaos. Often, the ramming attacks are followed up with knife or other violence by the drivers once the vehicles become too badly damaged to continue using. 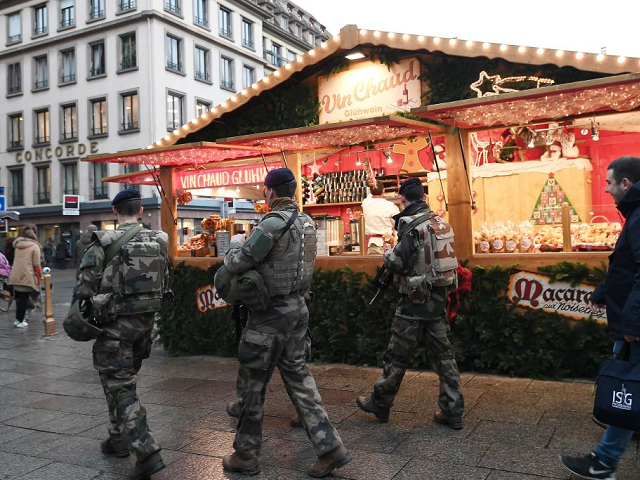 In Europe, 2017 saw the Barcelona attack using a hired van to crash into pedestrians on a popular tourist street killing 16 and injuring 152 was committed by Muslim radicals with links to the Islamic State. In France, a ramming attack against French soldiers in northern Paris injured six, and a ramming attack coupled with an explosive device struck a convoy of police vans and saw the assailant killed, both attacks were committed by Islamic radicals.

Stockholm, Sweden was also hit by radical Islamists using a vehicle as a weapon when five were killed by an asylum seeker with links to the Islamic State drove a hijacked lorry into crowds. There were similar attacks with vehicles against pedestrians by Islamic radicals in the United Kingdom in 2017 as well, including Khalid Masood killing six and injuring 40 outside the Palace of Westminster, and a gang of Islamists killing eight on London Bridge and Borough market with a van and knives. 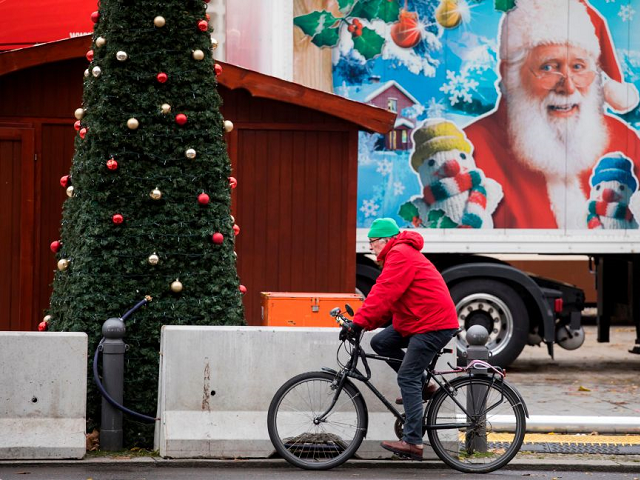 A cyclist pedals past concrete barriers surrounding the Christmas market at Breitscheidplatz in central Berlin on November 19,2017 / Getty Images

In Finsbury Park, London, one was killed outside a mosque in June after Welsh resident Darren Osborne drove a hire van into a group of worshippers in an act of apparent anti-Muslim violence.

Other high profile acts of terror against the West by Islamic radicals in 2016 include the Nice attack, which saw 86 killed and 434 injured on France’s national day, and the Berlin Christmas market attack itself.

In France in 2014, two vehicular attacks in two days — one of which was launched against the Nantes Christmas market — came just days after an Islamic State propaganda video was released in the French language called ‘What are you waiting for?’, which called on Islamists to “kill them and spit in their faces and run them over with your car”.