Speaker of the Hungarian National Assembly László Kövér has warned in a conference speech that “both ethnic majorities and minorities” are facing the same threat: the possibility of “global government”.

In his address at a conference Monday, the founding member of Prime Minister Viktor Orbán’s conservative Fidesz party stated that “the new technique and ideology of government is aimed at creating (societies) without an identity”.

Referring to proponents of global governance as “potential colonists”, Mr. Kövér said: “They want to strip people of their religious, national, family, and even sexual identities so that they are no longer able to recognise, express or enforce their own interests.”

Hungary has been at the forefront of the battle against the erosion of the nation-state and conservative values with Prime Minister Orbán, vowing last month to put “Hungary first” and fight those within the European Union who “want to change the Christian identity of Hungary and Europe”.

The country’s rejection of “anti-Christian internationalist powers” is informed by decades of oppression under Communist rule.

‘Never Underestimate the Power of the Dark Side’ — Globalists Want to Mould All Nations in EU’s Image, Warns Orban https://t.co/KFyNI7QKrs

Protecting against the attacks on faith and family comes from various layers of the Fidesz government, with representatives from Hungary and fellow Central European nations Slovakia, Czech Republic, and Poland meeting at a Visegrád Group family policy parliamentary committee in December to pronounce their rejection of the progressive “gender programme” and affirming the reality of “biological gender”.

Delegates also pledged to stand by traditional values by vowing “to protect life, marriages based on the relationship between man and woman, [and] the family on which the whole of society is based because it is the basis for a sustainable future”.

For their efforts, the conservative, pro-sovereignty, and anti-mass migration governments of Hungary and Poland have seen record public support.

Orbán, a staunch opponent of the EU’s plan for the institutionalisation of managed mass-migration from the third world – plans which the Hungarian believes are informed by billionaire open borders campaigner George Soros – is expected to win his third term in office on April 8th.

Last week, tens of thousands of Hungarians took part in a “Peace March” in support of the premier and his government. Organisers leading the march bore banners inscribed with, “The homeland before all else” and “Hungary protects Europe” –  a reference to the country’s southern border wall with Serbia that halted the flow of illegal migrants. 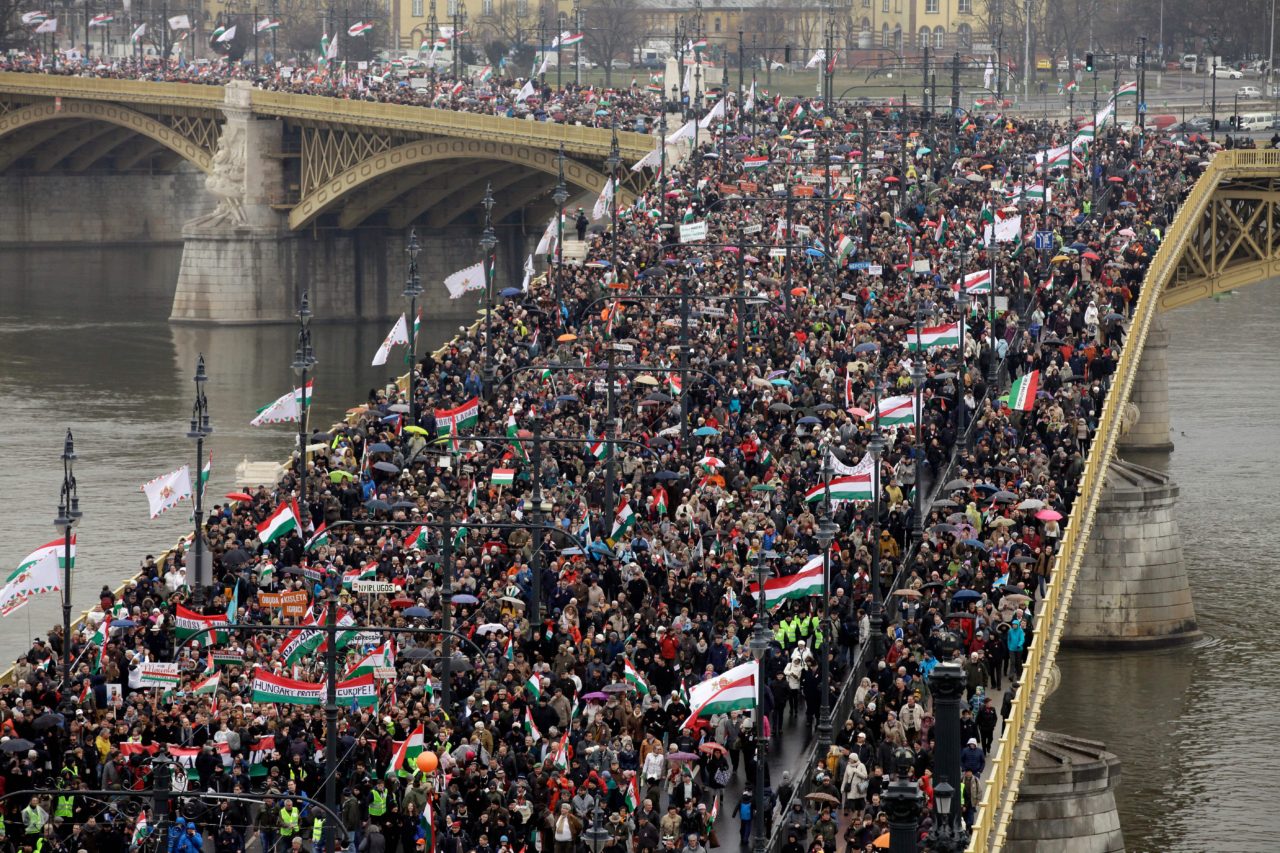 People supporting the government of Hungary’s Prime Minister take part in a “Peace March” in Budapest on March 15, 2018, as celebrations are underway to commemorate the 170th anniversary of the 1848-1849 Hungarian revolution and independence war on Hungary’s National Day. Hungarians took to the streets in separate national day demonstrations to both voice support for, and protest against, Prime Minister Viktor Orban, as an election April 8, 2018 nears. / AFP PHOTO / Peter Kohalmi (Photo credit should read PETER KOHALMI/AFP/Getty Images)