PARIS (AP) — A French lawyer has filed a lawsuit in a Paris court against visiting Saudi Crown Prince Mohammed bin Salman, accusing him of complicity in torture in Yemen, an embarrassment for the French government as it rolled out the red carpet for its powerful guest.

Lawyer Joseph Breham, representing a Yemeni human rights group, is suing the crown prince, currently in France on an official visit, for his leading role in the Saudi-led coalition’s airstrikes fighting Iran-backed Houthi rebels in Yemen.

Breham told The Associated Press that French courts have “universal jurisdiction” to investigate the case since the lawsuit was filed Monday while the crown prince was present on French soil. But he acknowledged Bin Salman can’t be arrested by French authorities due to his diplomatic immunity.

The Paris prosecutor’s office didn’t respond to requests for comments from the AP.

Saudi Foreign Minister Adel Al-Jubeir called the lawsuit “ridiculous.” Speaking Tuesday to reporters in Paris, Al-Jubeir blamed the Houthis for stealing humanitarian aid, using human shields and reneging on peace agreements, and said “the lawsuit should be filed against them.” He insisted that Saudi actions in Yemen have been fully compliant with international humanitarian law.

The Paris-filed legal complaint by Yemeni group Legal Center for Rights and Development will automatically trigger the opening of a formal judicial inquiry by a French investigating judge. But the prosecutor’s office will have the opportunity to challenge French courts’ jurisdiction to the investigating magistrate who’ll have the final say, the lawyer said. 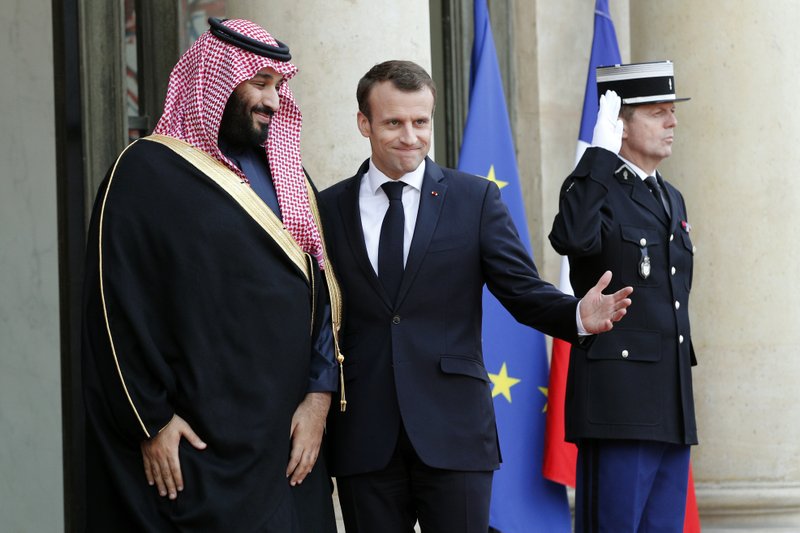 “The complaint is anything but symbolic,” Breham insisted in an interview with The Associated Press.

“Mr. Bin Salman’s immunity does not prevent judges from investigating the case nor, when he has no longer a rank as head of state or when he comes on a private visit to France, from questioning him at that time, or eventually from trying and convicting him,” the lawyer added.

The lawsuit claims that “massive and indiscriminate attacks” against civilians in Yemen represent torture as defined by the United Nations’ Committee Against Torture, as they caused “pain and widespread suffering” among the country’s people.

Press reports, experts and non-governmental organizations have documented multiple violations of international humanitarian law by the Saudi-led coalition, resulting in the deaths of many civilians, including bombings of homes, markets, hospitals, businesses and schools, the lawsuit said.

The 20-page complaint cites the findings of an exclusive investigative report by The Associated Press last year. The AP report identified at least 18 secret detention sites in Yemen and cited accounts by former detainees reporting torture practices they experienced in these clandestine centers, the lawsuit said.

Bin Salman, who was defense minister when Saudi Arabia launched the war in Yemen, allegedly provided the means and instructions for these crimes of torture to be committed, the lawyer said.

The 1984 U.N. Convention against Torture and Other Cruel, Inhuman or Degrading Treatment or Punishment was signed and ratified by France. The treaty was incorporated into French law in 1994, which gives French courts universal jurisdiction to prosecute acts of torture, even by foreign citizens in foreign countries, provided that the alleged torturers are present on French soil when the complaint is filed, Breham said.

Bin Salman, who arrived in France on Sunday for a several-day official visit, is to have dinner with French President Emmanuel Macron Tuesday evening at the Elysee palace, where they will hold a joint news conference. After agreements worth billions of dollars were announced, the two leaders are expected to discuss a future “strategic partnership” expected to see new contracts signed during Macron’s trip to Saudi Arabia at the end of the year.

For Breham, the lawsuit is a way to draw attention to the tragedy unfolding in Yemen, which according to the U.N. is the worst humanitarian crisis in the world today.

The lawyer said: “Our main goal is that perpetrators of acts of torture, of such serious crimes, can understand that impunity no longer exists for them.”