London’s Hackney Police have deleted a number of social media posts showing “weapons” confiscated during operations after they were derided for showing unusual items including a butter knife being taken in.

Responding to a Breitbart London request for information on the decision to take down the Tweets — which the force had previously defended following negative replies — the Metropolitan Police confirmed the messages with their accompanying images had in fact been deleted on May 2nd, following “a discussion between members of Hackney’s senior management team.”

The original posts were among dozens put online by British police forces to publicise the work done to get dangerous weapons out of the hands of criminals. Although some of the Tweets posted dated back several years, they took on a new relevance amid public interest in police work as almost all measures of violent crime in the British capital London surged.

One such post showed a police officer holding a round-tipped knife, similar in shape and size to those used to spread butter on bread, while another showed a number of objects including a lump hammer, knives and a car tape-deck — but which featured most prominently a bicycle wheel, prompting bemused reactions online. 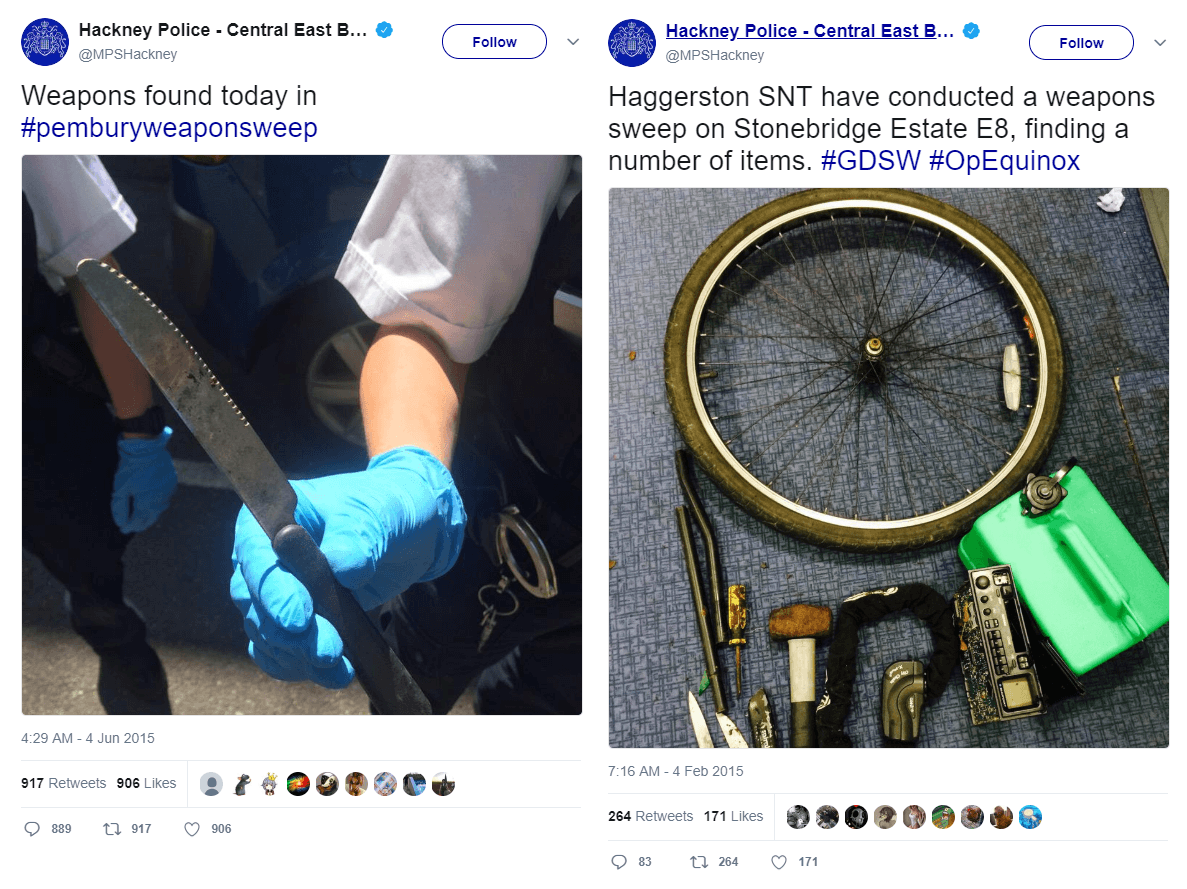 The captions of both posts made clear references to “weapons” confiscated.

London Police told Breitbart London that “a large number of offensive messages” had been posted in reply to the Tweets, and they were “generating lots of retweets and comments”.

Defending the deletion, the police spokesman said the volume of notifications popping up on Twitter in relation to the mocked posts meant officers on social media patrol were struggling to respond to genuine requests for advice from the public.

The force said: “Hackney police welcome sensible debate around their tweets and police activity and pride themselves on providing timely and useful responses, however obscenities and deliberately inflamatory [sic] tweets are neither helpful nor relevant.”

Responding to a request on how the decision to delete the Tweets had been made, the spokesman confirmed it was done after discussions between “senior” members of Hackney Police’s management team, and “There was no political input or motivation to the decision.”

Breitbart London reported in April on London’s murder rate passing New York’s for the first time in two centuries, a key milestone in the fortunes of Britain’s capital.

There have been 62 suspected murders in the city in 2018 so far, with 36 of those being fatal stabbings.

There were six more non-fatal stabbings in the city on Tuesday night alone, with four of the victims being teenage boys.

The surge in violence — including a 70 per cent rise in youth homicide in the first year of Sadiq Khan’s mayoralty — has led to questions over whether police resources as directed by Khan’s city hall are being used as effectively as possible.

As a @LondonAssembly member, I disassociate myself from this rubbish.
It shouldn’t need pointing out that murder after murder has happened throughout the nastiest coldest months of winter. https://t.co/woGiuaUcVy

The Evening Standard reports the remarks of City Police and Crime Committee chairman Steve O’Connell, who said: “The Mayor and the Met need to take hold of the situation. We are determined to find out what is working and what is not.”

“Enough is enough. Where is the evidence that the Mayor’s new taskforce is working? Did the Met take its eye off the ball on gun-related crime? Londoners deserve urgent answers.

“We need to unite and say this senseless killing must stop. We cannot have a summer of violence and bloodshed. The Mayor and the Met need to prove they can stop this surge.”