WARSAW, Poland: Polish migrants living in and leaving the United Kingdom for their native country have cited concerns about life in contemporary Britain, with issues including economics, anti-white racism, and terrorist attacks.

While the readjustment of the British economy, rapid growth in Poland, and the pending departure of Britain from the European Union account for some returnees, Polish emigres to Britain interviewed for a feature in Polish magazine wSieci also revealed a number of other concerns. 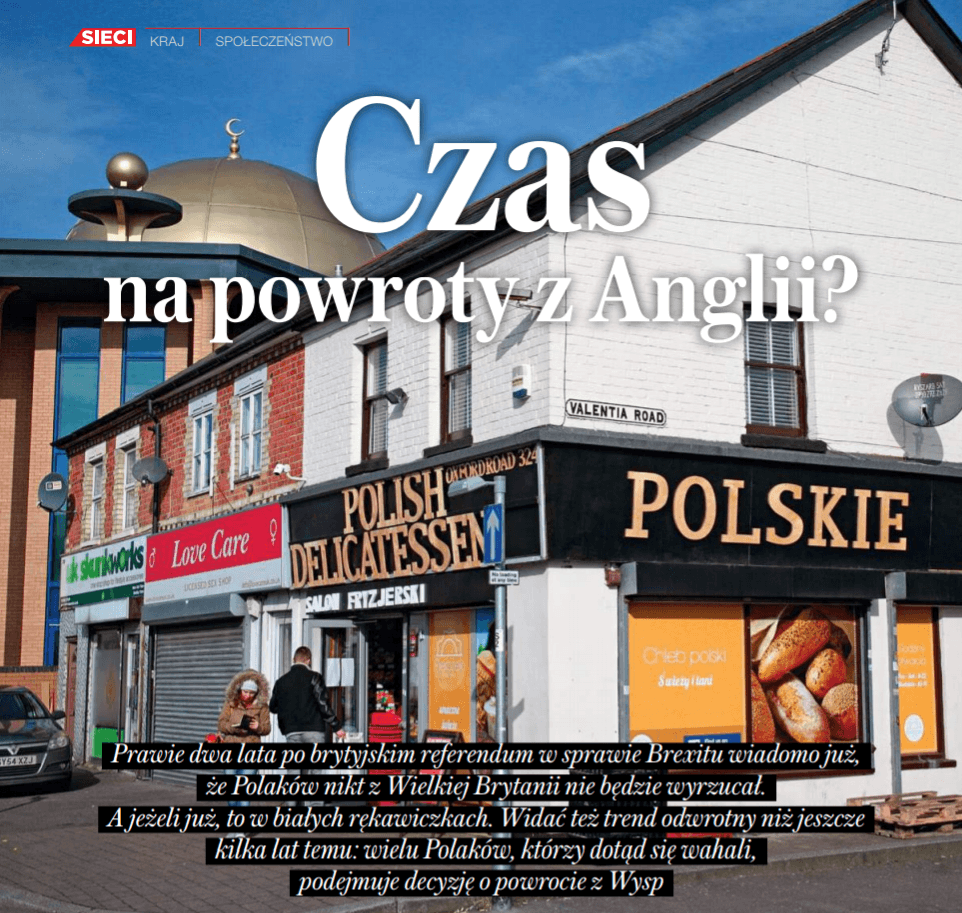 The headline of the magazine feature asks the question ‘Time to Come Back From England?’ / wSieci Magazine

Priest Mateusz Konopiński, and Tomasz Kania, who has lived in London over ten years, told the magazine they “are fully aware that London has not been a safe city for a long time, and that something could happen here any time soon… we can’t be [totally] sure that the security services will detect terrorist actions on time.”

Similarly, Mother Ewa Pastuła, who recently moved back to Poland after living in Milton Keynes, Buckinghamshire, told wSieci that she felt much safer in a small British city than in London, but “only when she came back to Poland did she understand what it means to feel really safe.”

Polish President: "There is No Doubt the Growing Wave of Terrorism is Linked to Migration" https://t.co/qCfVt3bwbm

Poland, which has accepted open borders with European Union nations and taken in around one million Ukranian refugees and migrants, has nevertheless rejected mass migration from predominantly Muslim nations.

It has not seen a single Islamic extremist attack, while Western European nations have seen dozens in recent years. Indeed, a senior British-born, Polish politician went so far as to claim in 2017 that to reduce the chances of terror attacks “the only proven method is not to allow Muslim migrants”.

Racism was another issue for Polish migrants. While the article cites anti-Polish sentiment whipped up by xenophobic newspapers such as The Sun, it also mentions positive attitudes towards Poles by Brits. One example is the statement by a bank manager to a Polish migrant that Polish people “are the hardest working group of people with whom I meet” and articles in British newspaper the Financial Times hailing the great economic achievements of Polish migrants.

Less positive, however, is the attitude that some members of Britain’s ethnic minority communities that have been shown towards white, Christian Polish arrivals. The magazine reported “aversion towards Poles and visitors from Eastern Europe… exhibited by black people.”

Polish Experts: ‘Europe is at The End of its Existence. Western Europe is Practically Dead’ https://t.co/nEYI8lmOuY pic.twitter.com/KFQwpE8h4T

The comments come after a number of high profile racist attacks against Poles by ethnic minorities hit British headlines. Police appealed for witnesses in Coventry in 2017 after a young Polish woman on a night out was abused and had her nose and cheekbone broken by a gang of three Asian men in what was described as a “racist attack”.

In another, police released CCTV images showing members of a 12-strong gang of black men and women related to an attack which left a Polish male in a critical condition with a fractured skull and bleeding on the brain.

The most infamous case came shortly after the Brexit vote when a Polish man was killed by a blow to the back of the head. The attack was claimed to be a result of the EU referendum, but in court it was revealed he had been killed by a black youth with a “superman punch” after racist comments were exchanged.

Concluding the article, wSieci notes an enduring reason for remigration to Poland: Poles having children in England but wanting to bring them up in a stable environment.

Asking whether the United Kingdom really is a good place to bring up children, the piece explains that while English people are generally “cultured and kind”, in an average school class only a handful of children’s parents are actually married and very few go to Church.

Ewa Pastuła told the magazine that “we began to observe the children of our friends, who had gone to such a school [for a longer period than our own children]… they began to live in a secularised way, spending time only on pleasure. We began to wonder, is this a good environment to raise our own children?”