Eight people were killed and almost 50 injured when three Islamic State group-inspired extremists ran down pedestrians on the bridge, then stabbed people at packed bars and restaurants in nearby Borough Market, one of London’s main foodie hubs. The three attackers were shot dead by police within minutes.

The rampage came two weeks after a bombing at an Ariana Grande concert in Manchester Arena that killed 22 people.

More than 700 people gathered Sunday inside the centuries-old Southwark Cathedral, nestled between the bridge and the market on the lively south bank of the River Thames.

Dean of Southwark Andrew Nunn said he hoped the service of remembrance “helps our healing.” 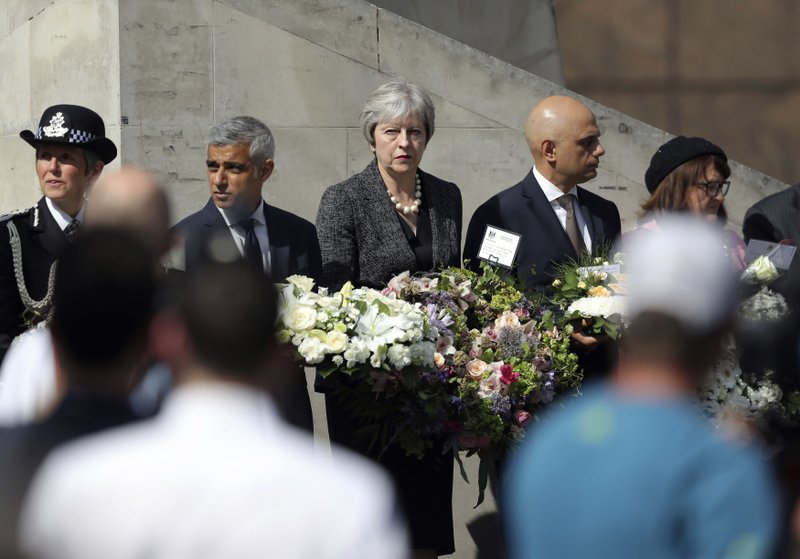 From left, Metropolitan Police Commissioner Cressida Dick, Mayor of London Sadiq Khan, Prime Minister Theresa May and Home Secretary Sajid Javid at Southwark Gateway Needle, on the south side of London Bridge, London, Sunday June 3, 2018, ahead of a minute’s silence to mark one year since a deadly vehicle-and-knife attack on London Bridge. (Andrew Matthews/PA via AP)

After the service, families of the dead planted an olive tree on the cathedral grounds, using compost made from floral tributes left by mourners after the attack.

May, London Mayor Sadiq Khan and some of the injured laid flowers beside the bridge before a national minute of silence at 4:30 p.m. The words #LondonUnited were due to be projected onto the bridge at dusk.

In a statement, the prime minister paid tribute to the bravery of first responders and others, including Ignacio Echeverria, a Spanish man who tackled the attackers with his skateboard and was killed.

May said the fact that seven of the eight victims came from outside Britain — from France, Spain, Australia and Canada — was “a reflection of our great cosmopolitan capital, whose energy and values brings together people from across the world, and a tragic reminder that the threat from terrorism transcends borders and impacts us all.”

“Our resolve to stand firm and overcome this threat together has never been stronger,” she said.

The London Bridge carnage was one of a string of attacks in Britain in 2017 involving Islamic or far-right extremists that killed 36 people in all.

Britain’s official threat level from terrorism currently stands at “severe,” the second-highest of five levels, meaning that an attack is highly likely.

“We expect the threat from Islamist terrorism to remain at its current, heightened level for at least the next two years, and that it may increase further,” the government said Sunday. It said the threat from extreme-right violence is growing.