Leave.EU founder Arron Banks has said there is “no evidence” he was part of a Russia or big data “conspiracy” to trick people into voting for Brexit, speaking at a parliamentary committee investigating so-called “fake news”.

The committee of MPs questioning him was entirely made up of Remain supporters, and Mr. Banks accused them of having a “vested interest” in discrediting the Brexit vote, and slammed sensational stories about his organisation in the Guardian newspaper as “fake news”.

He also revealed he had lodged a complaint with the Electoral Commission about their investigation into him and Leave.EU, restricting what could be asked by the committee.

The questioning began with Mr. Banks pointing out the committee’s chair, the strongly anti-Brexit MP Damian Collins, had taken a £1,000 gift off Russian oligarch Roman Abramovich, who he called “Putin’s number one man in the United Kingdom”. Mr Abramovich had his UK visa revoked last month due to Kremlin links.

Banks jokingly said Mr. Collins was “conflicted” and should not sit in the meeting, to which he replied, “nice try”, without denying taking the gift of tickets to a football game. 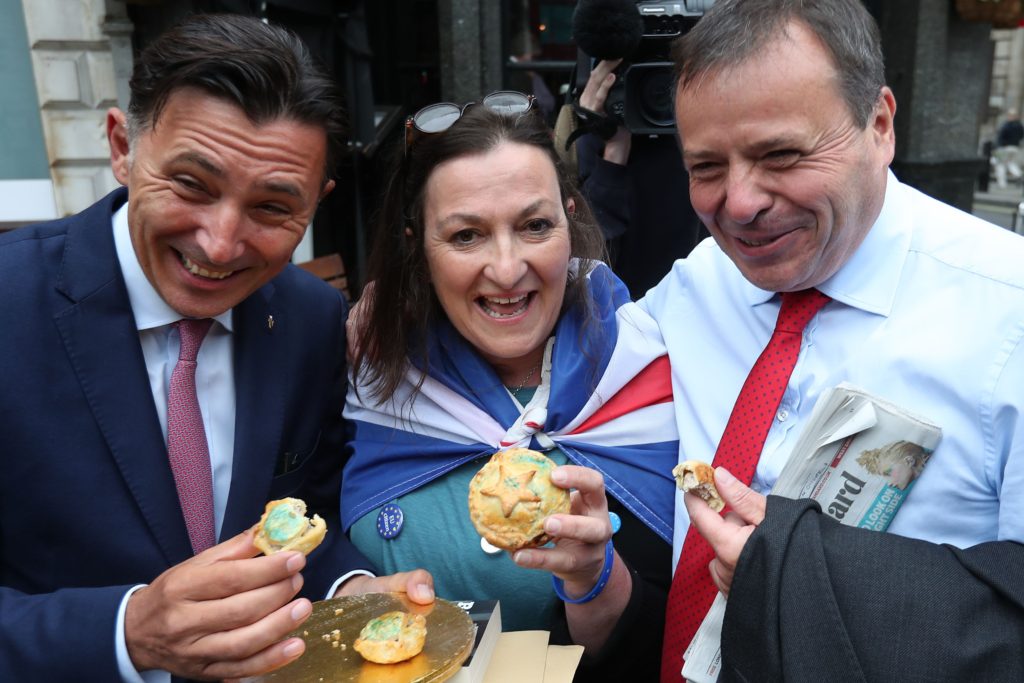 Arron Banks (R) and Leave.EU campaigner Andy Wigmore (L) are given pork pies by a pro-EU protester as they arrive at Portcullis House to give evidence to Parliament’s Digital, Culture, Media and Sport (DCMS) Committee on June 12, 2018. DANIEL LEAL-OLIVAS/AFP/Getty)

The businessman and Brexit-backer said anti-Brexit journalists assumed “there must be a conspiracy” because he and his colleague Andy Wigmore, a diplomat, had lunched with the Russian ambassador, but “there has been no definitive evidence of anything”.

Mr. Banks reminded the committee that his wife is Russian, and said the lunch was fairly normal in the diplomatic and political community.

“I like to think I’m an evil genius with a white cat that controls the whole of Western democracy. But clearly, that’s nonsense,” he said.

He also insisted that Leave.EU and UKIP had not worked with Cambridge Analytica during the Brexit campaign and said the “ad agency” did little unusual in the world of political campaigning.

“You look at Obama, he won off the back of his social media campaign. All the liberal people thought that was a fantastic thing and he’d discovered gold dust,” he said.

In recent days, Mr. Banks has accused the Guardian newspaper of “us[ing] stolen” emails, after a computer belonging to a journalist who helped to write his book, The Bad Boys of Brexit, was allegedly “hacked“.

Today, he said there were numerous errors in the Guardian’s “fake news” reporting of his activities, that is regularly tweeted by Mr. Collins. This includes “an article saying that we had an income of £19m and expenses of £21m… actually, that’s the payroll”. The paper was forced to retract this claim.

He was asked about the figures more than once in the questioning, to which he replied: “That does rather illustrate the point, doesn’t it? You read a Guardian report that has a wilfully misleading headline, and you believe it’s true. But then they correct it, they bury the correction on the website, and you don’t see that. You then ask me a question based on it, and you spread fake news.”

Watch what Leave campaigners Arron Banks and Andy Wigmore had to say when @carldinnen asked them: "Are you Russian agents?"https://t.co/A3rOADgr1n pic.twitter.com/MwdaozrwD7

“You’ve got a vested interest in trying to discredit the Brexit campaign… you’ve not called any witnesses from the Remain campaign to hammer them,” he blasted later.

Mr. Osborne is now the editor of the Evening Standard, which is owned by Russian oligarch Evgeny Lebedev, and has continued to campaign ferociously against Brexit since the referendum, whilst allegedly taking money from firms for favourable coverage.