Alt-left Antifa extremists have taken responsibility for a vicious attack on Generation Identity UK co-leader Tom Dupré, severely lacerating his face and allegedly leaving him unconscious for up to five minutes.

The politically motivated attack took place on Thursday evening in the Hackney area of London, according to Dupré, who said he had been in a pub in the area, then left and walked by a Kurdish community centre noticing a group of Antifa extremists.

Dupré claims he, and those he was with, waited for the extremists to leave after going to a nearby shop. On the way back, he said, “OK two guys ran up from behind, hit me in the back of the neck/head, I went over into a lamppost-box thing and that’s how I split my head.”

“Then police turned up and I got it stitched up,” he added.

The Generation Identity co-leader claimed that he wanted to keep the incident quiet but the pro-Antifa Twitter account ‘libcom dot org‘ began to brag about the attack on Saturday. 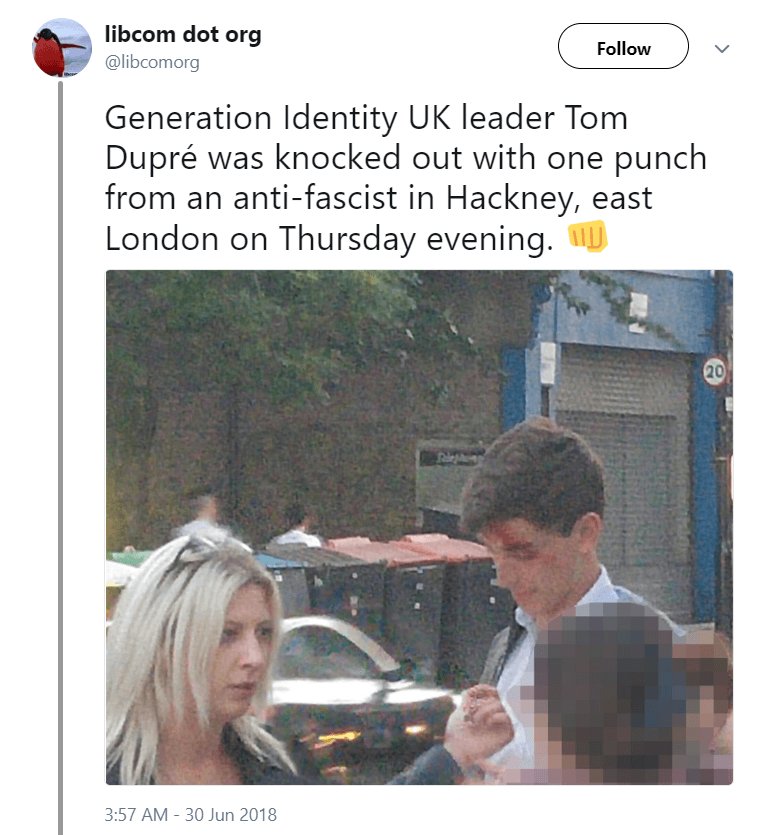 The account user wrote that Dupré “was knocked out with one punch from an anti-fascist in Hackney, east London on Thursday evening,” adding in a subsequent tweet: “While on the ground Dupré took a kicking. Anti-fascists tell us it took the former City banker nearly five minutes to regain consciousness” — followed by a ‘crying with laughter’ emoji.

“Upon coming round Dupré nearly stumbled in front of an oncoming bus but a local took pity and stopped him from getting flattened,” the user added.

The Twitter account “London Anti-fascists” also ‘liked’ all of the libcom dot org posts, appearing to indicate approval of the attack. 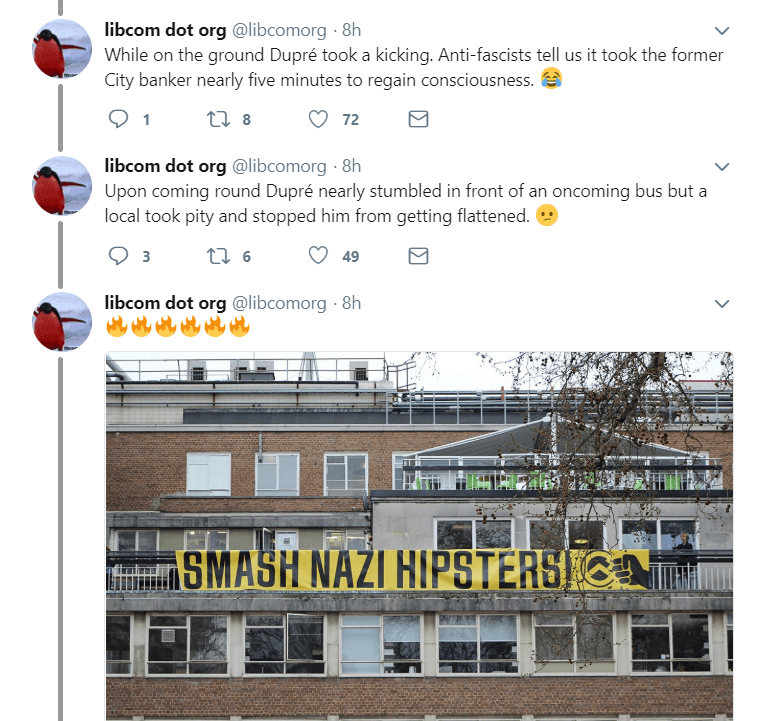 The attack is the latest act of violence from the alt-left extremist group, who have attacked members of the populist Alternative for Germany (AfD) party, as well as attacking and injuring hundreds of police officers at the Hamburg G20 last year.

In the United Kingdom, Breitbart London has revealed Antifa’s links to the proscribed Kurdistan Workers’ Party (PKK), as well as exposing the group holding a recent conference featuring members of the Red Action group, which had a previous leader linked to the 1993 Harrods terrorist bombing.

Antifa also has links to far-left Soros-funded activist group HOPE not Hate (HnH), whose researcher Dr Joe Mulhall has tweeted to accounts belonging to the movement on multiple occasions.

The escalation of far-left violence has been noted recently by German intelligence officials, who observed that between 2012 and 2017 crimes committed by left-wing extremists have grown by 88 percent.

The report comes after an Antifa member was found with a mobile bomb factory and the group released a “terror handbook” encouraging violence against an AfD conference in Augsburg.