After the first time a Swedish election has been monitored by the Organization for Security and Cooperation in Europe (OSCE), observers have expressed “shock” at the nation’s “undemocratic” system.

Danish delegate Michael Aastrup Jensen, who has previously monitored elections in Russia and Eastern Europe, told Berlinske: “In all the many election observations I’ve been on, I have not seen anything that comes close to how undemocratic the Swedish voting system is.”

The foreign policy spokesman for Denmark’s liberal governing party Venstre, Jensen said the major issue with the Swedish election system is the lack of privacy for citizens casting their ballot.

Separate parties have separate ballot papers in Sweden, the choosing of which takes place in public, as voters must select their preferred ballot papers before placing them into a ballot box.

“It is just so far beneath anything remotely resembling European election standards, or anything we would allow even in Eastern Europe,” he said. 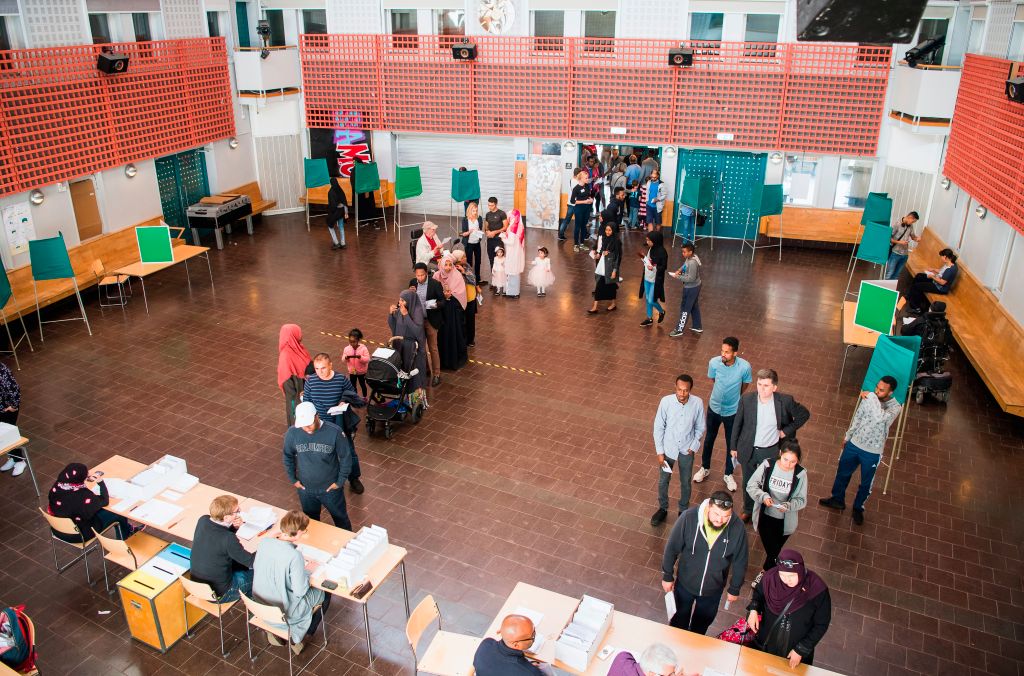 People vote in the Swedish general elections at a polling station in the suburb of Rinkeby, north of Stockholm on September 9, 2018. (Photo by JONATHAN NACKSTRAND/AFP/Getty Images)

Jensen told the Danish newspaper how, outside of official monitoring duties, he visited a number of polling places in Malmö to see, ‘with his own eyes’, voting take place, and found “party soldiers” standing in front of the stations, where they were trying to hand voters ballot papers for their respective parties.

As chairman of Denmark’s delegation to the Council of Europe, the organisation responsible for the European Court of Human Rights (ECHR), Jensen hopes to bring attention to problems with the Swedish election system.

“I will highlight the issue with the Council of Europe so that we can hopefully send the strongest possible signals to Sweden that they should introduce the sort of rules seen in Denmark and in virtually every other country in the world,” he said.

Speaking on the outcome of the Swedish election, which saw the worst result in 100 years for the ruling Social Democrats, the Danish foreign minister also hit out at the refusal of mainstream parties to cooperate in any way with the populist Sweden Democrats, which this year secured its largest ever share of the vote.

“Even though 60 percent voted against the current government,” Jensen said, Sweden would likely end up with the “unimaginable situation” in which it continues to govern, thanks to parties’ refusal to work with the Sweden Democrats.

“From a point of view of democracy this seems very wrong to me, as it basically amounts to [politicians in the other parties] telling the many Swedes who voted for the Swedish Democrats that they are not important,” he told news agency Ritzau.

Reporting he had urged Venstre’s Swedish sister parties, the Centre Party and Liberals, to speak with the Sweden Democrats, to no avail, he commented that despite the parties sharing the same values on paper, “It is as though we live in two different worlds.”

“Sweden is at a place where Denmark was in the 1990s, where you call someone racist if they talk about the problems that really exist,” the Danish minister remarked.

The Financial Times recently reported that a number of Social Democrat candidates resigned or were suspended for telling lies about the centre-right Moderates and the Sweden Democrats, including that they would be accusing Muslims of crimes in order to take their children away from them.