Tony Blair’s former right-hand man Alastair Campbell has told Boris Johnson to “f*ck off under a bus” because he proposed a new positive vision of Brexit.

Responding to an article in The Telegraph by the former foreign secretary, Campbell wrote on Twitter: “Thankfully behind a paywall. Now fuck off under a bus with a great big fat lie on it charlatan.”

He has also been promoting t-shirts with the words ‘Fuck Boris’ written on them, alongside his new book.

Thankfully behind a paywall. Now fuck off under a bus with a great big fat lie on it charlatan https://t.co/e21dHXpz8Y

Campbell, who now edits the anti-Brexit New European newspaper, has been leading calls for a second referendum, or so-called ‘People’s Vote’, to overturn Brexit.

Last week he was humiliated live on the BBC after saying support for such a vote was growing, before a leading pollster slapped him down and revealed there is no consistent evidence for this claim. 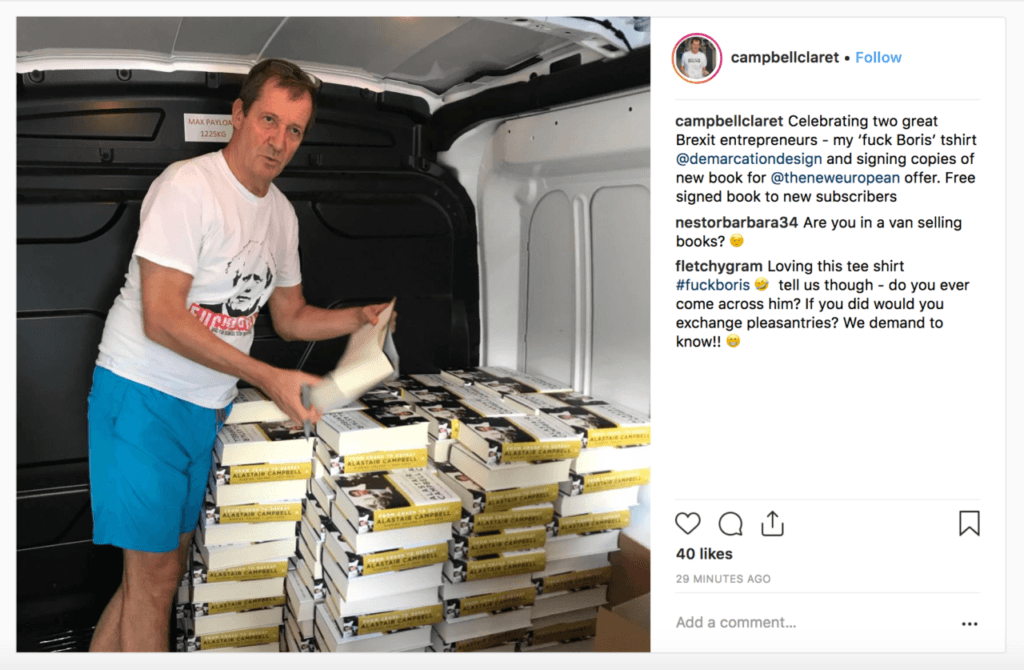 Boris Johnson has suggested an alternative to Prime Minister Theresa May’s Chequers plan for a ‘Soft Brexit’ in the form of a ‘SuperCanada’ free trade deal with the European Union (EU).

The leading Brexiteer launched one of his most scathing attacks to date on the Mrs May’s plan, calling it “a moral and intellectual humiliation for this country”.

In the column, titled ‘My plan for a better Brexit’, he set out an alternative vision which he said would put the United Kingdom back on a level footing after the EU rejected the Chequers plan at an EU summit in Austria last week.

“Overall, the Chequers proposals represent the intellectual error of believing that we can be half-in, half-out: that it is somehow safer and easier for large parts of our national life to remain governed by the EU even though we are no longer in the EU,” he wrote.

“They are in that sense a democratic disaster. There is nothing safe or ‘pragmatic’ in being bound by rules over which we have no say, interpreted by a federalist court.”

The former Foreign Secretary went on to denounce the Chequers proposals as “the worst of both worlds” and a “moral and intellectual humiliation for this country.”