Spanish police have arrested 13 people on suspicion of using black magic to coerce Brazilian transgenders into prostitution and drug dealing.

Officials in Murcia, south-east Spain, confirmed Wednesday that they had busted the crime ring, arresting citizens from Colombia, Brazil, Peru, Spain, and Romania.

The traffickers were led by a Brazilian national living in Spain who preyed on “vulnerable” transgender youths and trafficked them illegally overseas.

Police were able to make the arrest after one of the trafficked victims went to authorities in February, saying “he had accessed Spanish territory in an irregular manner with the mediation of another Brazilian citizen.”

“This compatriot paid for the transfer from Brazil to Spain,” police said, “thus contracting a high economic debt… The young man was forced to prostitute himself to pay what was owed, receiving threats and even physical aggression from his compatriot.” 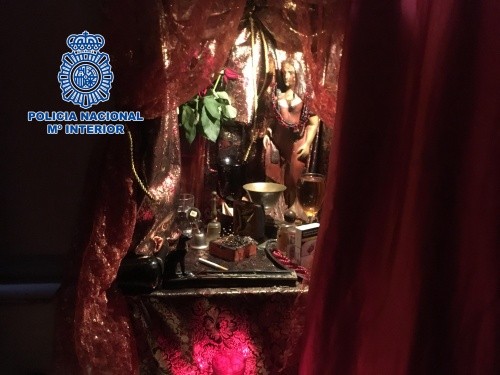 After culminating evidence over several months, raids took place across three properties where police seized documents confirming the suspects had trafficked the transgender migrants from Brazil to Spain.

Police also came across “effects related to Santería [an Afro-Caribbean voodoo-like religion which includes aspects of Catholicism] and black magic” — which investigators believe were used to coerce the Brazilians.

Four suspects have been held, while the remaining nine have been bailed.

This would not be the first time that illegal migrants had been forced into prostitution in Spain using black magic.

Breitbart London reported in February that multiple arrests were made in Britain and Spain where a criminal gang allegedly used “voodoo rituals” to coerce African women into prostitution, including forcing them to eat raw chicken hearts.

In Sweden’s multicultural city Malmö, migrant pimps were also found to be using voodoo to coerce Nigerian women into prostitution to pay off their debts for their aided illegal migration.

“For those who believe in voodoo, it becomes a truth. It can be an extremely productive way of making people obey and it is usually a person in a position of power using voodoo who cannot be questioned,” Lisa Green, Coordinator for Trafficking at the Malmö Centre for Sexual Services, said.