A senior Eurocrat and the man in charge of negotiating Brexit with the United Kingdom reacted with clear revulsion to the claim that God has a divine plan and that President Donald Trump is part of it on Thursday, saying the suggestion made him feel Atheist.

Belgian politician Guy Verhofstadt wrote Thursday “I have never felt so atheist” in a Tweet that included an embedded link to an article about remarks by White House press secretary Sarah Sanders. 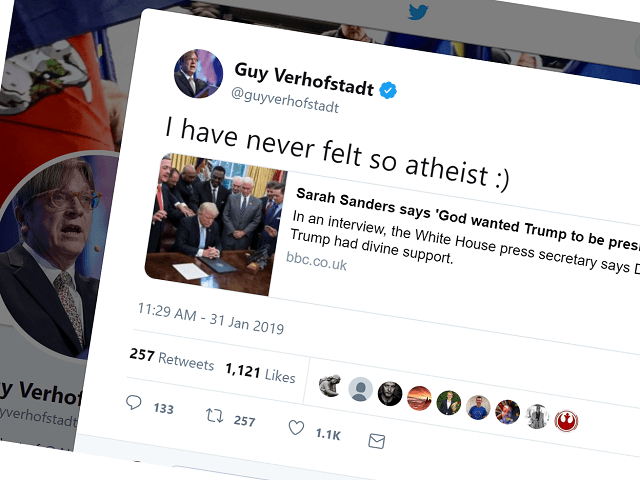 The combative EU politician is perhaps best known for his role as the Brexit Coordinator for the European Parliament, and as a key voice pushing the European Union’s hard-left agenda on member states — whether they like it or not. He has been in more or less open competition with Hungarian Prime Minister Viktor Orban through 2018, threatening populist nations and leaders to accept the bloc’s liberal values or else leave.

Showing his contempt for the democratic desires of the voters of Europe, speaking in June Verhofstadt demanded populists be locked out of the political process in Europe, telling the parliament: “It is time we stopped corporation with people like Orbán, Kaczyński, [and] Salvini, who are in fact working with these nationalists and these populists.

“We as liberals can never accept the illiberal plot of these people. We and you have to be in the front of the fight against them.”

While Verhofstadt has worked to make Brexit as difficult for the United Kingdom as possible, he may have let slip his motivation for that in comments in September 2018. Claiming the chaos of Brexit would make Europeans love the European Union more, he said: “Fortunately, we have Brexit. It illustrates the populist wave, but it has also provoked a resurrection of attachment to the EU within public opinion… We see a change in their language. They all wanted to get out and now they stay. They see that people do not want it.”