Danish police faced off against civil unrest and riots in a diverse suburb of capital city Copenhagen Sunday night, as local residents reacted violently to the presence of an anti-Islamisation campaigner who threw a copy of the Quran into the air.

Lawyer and political campaigner Rasmus Paludan, who had pre-warned police that he was intending to lead a demonstration on Sunday afternoon, threw a copy of the Quran through the air several times before being escorted away from the area by police for his own safety. Paludan was banned from protesting in Copenhagen for the rest of the day, but launched a new protest Tuesday evening in a neighbouring police district. 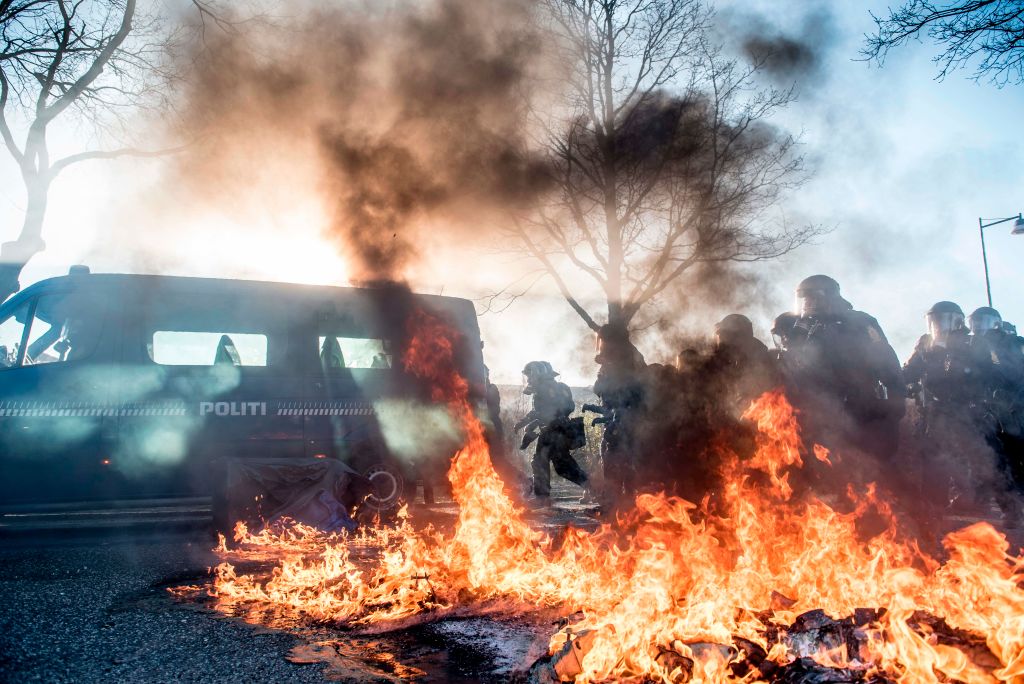 Riot Police pass a fire burning at the side of the road on April 15, 2019. MADS CLAUS RASMUSSEN/AFP/Getty Images

Police eventually arrested 23 during the rioting that followed the Sunday afternoon protest, including one who launched an attempted attack on Paludan himself, rushing at the activist and attempting to hit to kick him, reports Politiken.

As the evening progressed, a burning barricade was built in the streets, and rocks and fireworks were thrown at police, according to reports in Danish media. Police for their part deployed in riot gear and used tear gas to clear the area, and even drew their side arms in response to threats, although the firearms were not discharged. 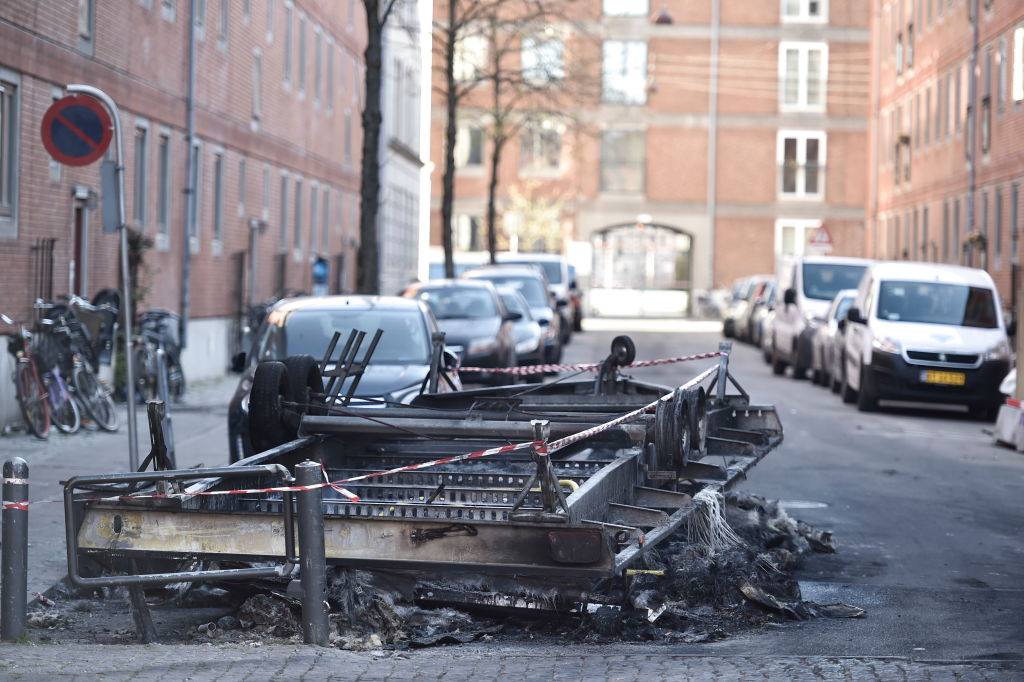 A burned trailer is cordonned off at Blaagaardsgade, Copenhagen, on April 15, 2019. – Denmark’s prime minister denounced a far-right activist after his attempt to demonstrate in a Copenhagen district with a high-immigrant population led to rioting and 23 arrests. (Photo by Mads Claus Rasmussen / Ritzau Scanpix / AFP) / Denmark OUT (Photo credit should read MADS CLAUS RASMUSSEN/AFP/Getty Images)

Danish state media the Danish Broadcasting Corporation, reported throughout the afternoon on the disturbances, stating that in the two hours running up to midnight the fire brigade responded to 20 fires, with shops and cars torched.

The protest had not originally been planned for Copenhagen’s Nørrebro neighbourhood but was moved there by police after a car exploded in the originally intended location, Mjølnerparken in Copenhagen. Officers have not yet said what the cause of the explosion was, but are investigating.

“He is violently provocative, but he has to meet with arguments, not with violence. His generalisations do not hold in reality and can be overcome with words.” 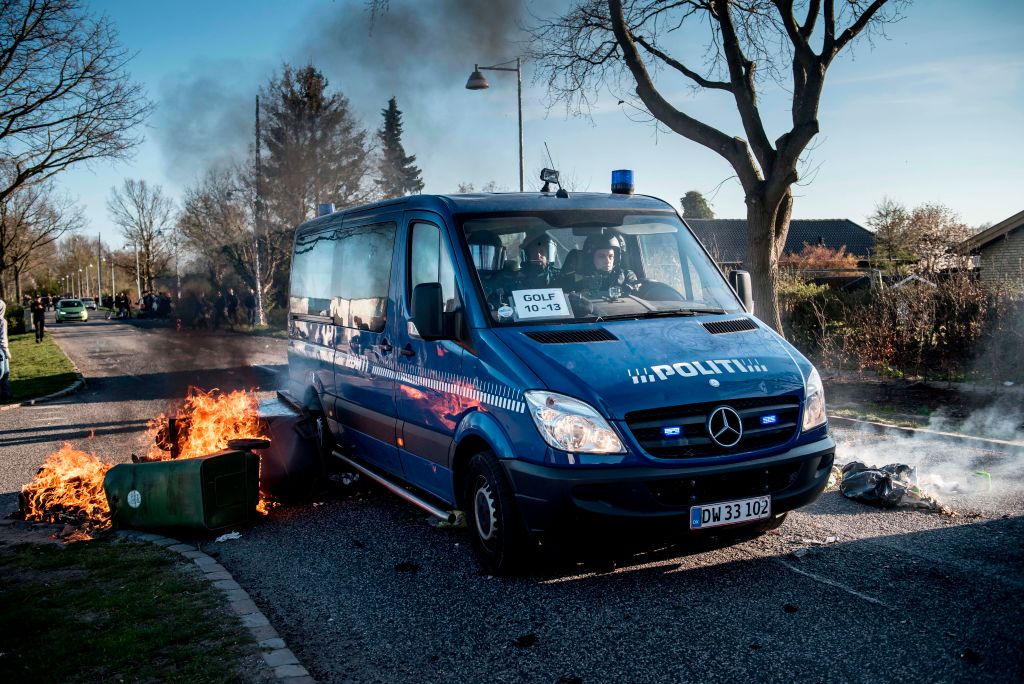 Police drive past a fire burning at the side of the road after they banned a demonstration in the Albertslund area planned by Rasmus Paludan, leader of the far-right Stram Kurs (Hard Line) party on April 15, 2019. Photo credit should read MADS CLAUS RASMUSSEN/AFP/Getty Images

For his own part, Paludan explained Sunday that his Quran protest was held against the 2015 Islamist Copenhagen terror attack, which took place in February 2015. As Breitbart London reported at the time, attacker Omar El-Hussein went on a two-day rampage, shooting at a freedom of speech conference in Copenhagen and the city’s Great Synagogue, before the gunman was killed by police.

Two victims died and five were injured in the attack, including three police officers. One of the dead was Danish filmmaker Finn Noergaard, who was shot with a stolen army rifle at close range. The intended target was Swedish artist Lars Vilks, who drew a cartoon of Mohammed in 2007.

Four men were subsequently tried as accomplices to the slain gunman, including 31-year-old Mahmoud Rabea who made a scene in the Copenhagen court by inviting the judge, who he called a “Nazi whore”, to suck his “circumcised cock”.

Paludan later announced his intention to repeat the protest on Tuesday evening, but with hours to go before the event took place the Copenhagen police announced they had banned him from leading any demonstrations in the city until April 23rd, DR reports. The demonstration began Tuesday evening in Lyngby, which is adjacent to the Nørrebro neighbourhood but falls in a different police district, circumventing the city ban.

Danish police are now dealing with counter protests against Paludan’s appearance, during which he held a burning copy of the Quran in a pair of barbeque tongues. Ekstra Bladet reports the presence of up to 300 police officers in riot gear who bundle Paludan into a police car when the situation turned violent, with counter-protestors letting off fireworks. 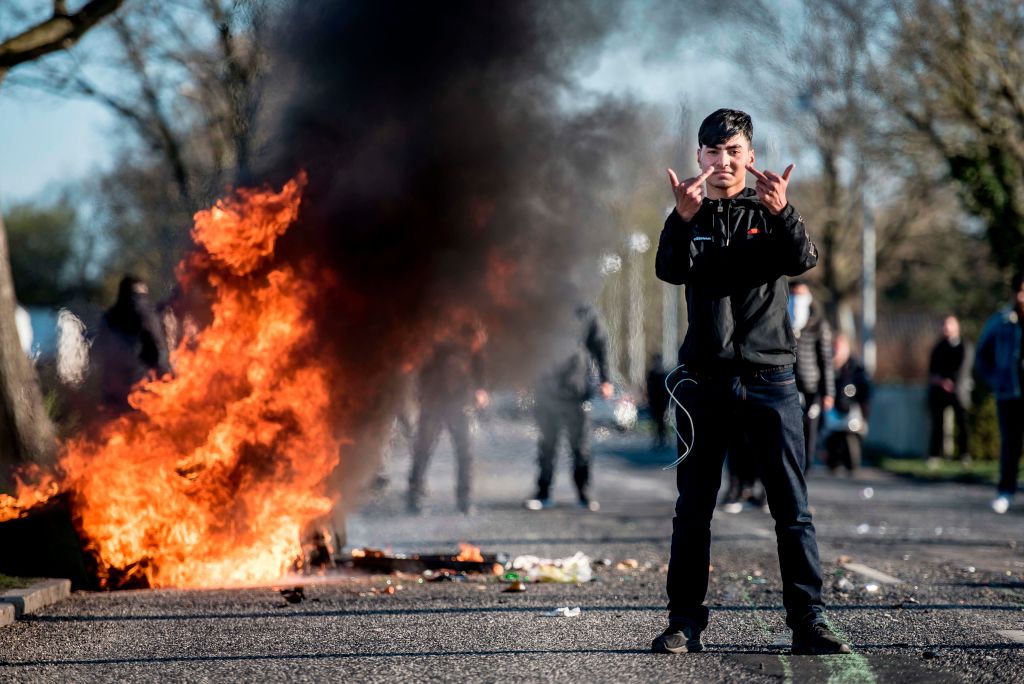 A protester gestures as a fire burns at the side of the road after police banned another demonstration in the Albertslund area planned by Rasmus Paludan, leader of the far-right Stram Kurs (Hard Line) party on April 15, 2019. Photo credit should read MADS CLAUS RASMUSSEN/AFP/Getty Images