Over half British adults claim to be ‘very concerned’ about climate change.

According to an Ipsos MORI poll conducted for the London Evening Standard, 85 percent are ‘concerned’ and 52 percent ‘very concerned’. And the figures are going up.

The proportion of people who are “very concerned” about climate change has jumped to a record 52 per cent, up from just 18 per cent five years ago.

More than half of women, 55 per cent, now express such deep alarm, compared with 48 per cent of men.

What does this tell us about the stupidity of our age?

It tells us – if those figures can be trusted – that parts of the West are now in the grip of the kind of mass hysteria more usually associated with millennial doomsday cults.

Britain has been brainwashed by a weird and sinister green religion. A nation of 63 million supposedly educated, rational people want to don hair shirts, flagellate themselves, despoil their landscape, sacrifice their elderly, reject prosperity, frighten their children and embrace austerity for no better reason than that they’ve been gulled by a handful of false prophets. 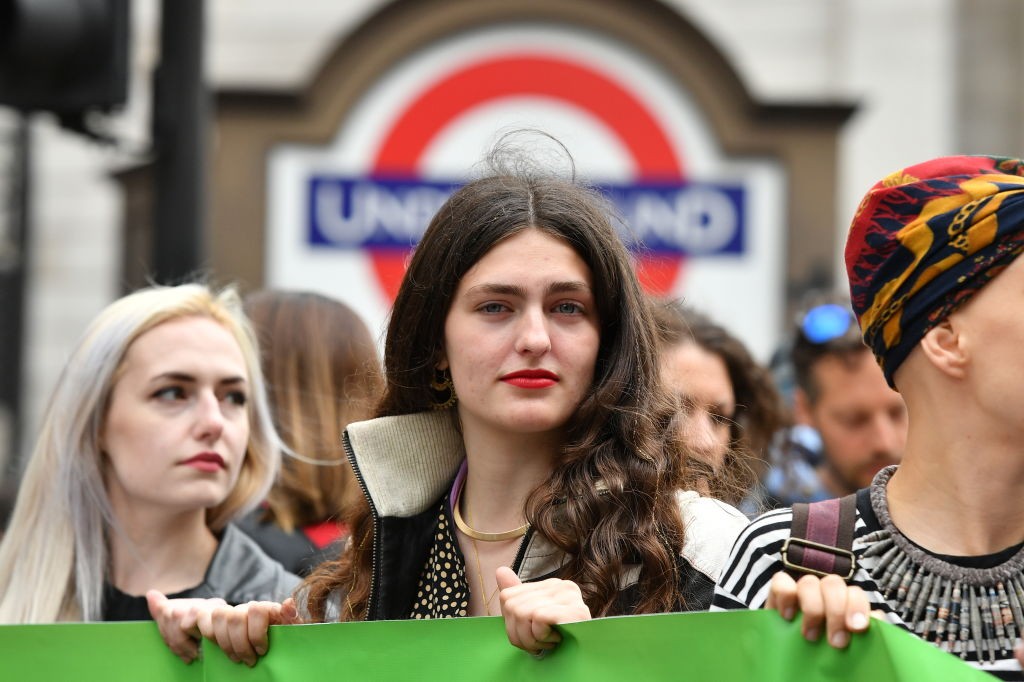 LONDON, ENGLAND – APRIL 25: Environmental campaigners from the “Extinction Rebellion” group block the junction at Bank as part of their ongoing actions and protests across the capital on April 25, 2019 in London, England. Photo by Leon Neal/Getty Images

St Greta of Thunberg, the visionary pigtailed Girl Child who can see “carbon” like the kid in The Sixth Sense can see dead people.

and, most scarily, at the extreme wing of the movement,

Hallam – and if you haven’t seen this you should for it gives you an idea what a menace we’re up against – can be seen here on the BBC, intoning with grim sincerity his doomsday guff:

“People are angry. People are in a rage. People don’t want their kids to die.”

No one wants their kids to die, I think we can all agree on that.

But it’s a very, very long stretch indeed to extrapolate from that point of common agreement that therefore we need to deindustrialise our economy, give kids a worse standard of living than their parents, ration travel, put key political decisions in the hands of citizens committees like the ones in the French revolutionary Terror, kill free speech, drive up the cost of energy, ruin the countryside with bird-chomping, bat-slicing eco-crucifixes and cede the global economy to countries that don’t give a damn about this fake-green-hysteria nonsense such as India and China and Brazil and, currently, thank heaven, Trump’s USA.

How, in heaven’s name, did a sensible, down-to-earth people like the British fall for this nonsense?

Religions need evidence to ‘prove’ they are real. For Christians, this took the form of the miracles performed by Jesus or later worked by martyrs and saints. For Greenies, it consists of vaguely plausible nonsense plucked from thin air, embellished and turd-polished by demagogues like the BBC’s house environmental activist Roger Harrabin and made real through constant repetition in the mainstream media.

The fact that more Britons than ever are “very concerned” about climate change represents the triumph of propaganda over evidence. Nothing has happened in the last five years to strengthen the case for catastrophic anthropogenic warming theory. On the contrary, more and more scientists are producing papers expressing scepticism in CAGW – with many of these arguing that solar activity, not the beneficial, planet-greening trace gas CO2, is the primary driver of climate change. The public has been worn down not by “the science” or anything recognisable as a hard fact, but by constant repetition of emotive imagery (emaciated polar bears; calving glaciers; floods; cracked, parched earth; etc) invariably presented wrapped in a false prospectus marked “climate change.”

Let’s just remind ourselves once more:

Just like in the old days when the Church was at its most powerful, the Establishment attaches itself to the prevailing religion for a number of reasons, ranging from superstition, gullibility and piety to greed to a desire to accommodate itself with the fashionable currents of the age. We see this now with our politicians, our royalty and our Wankerati: none dares question the new religion – and many ostentatiously prostrate themselves before it.

History, I believe, is going to judge some members of our Establishment very harshly for endorsing this toxic, anti-scientific, economically catastrophic, environmentally damaging drivel when they could have done the responsible thing and spoken out against it. No Michael Gove, it was not big and clever for a Conservative minister in a Conservative government to appoint a hard-left activist from the furthermost fringes of green lunacy – Greenie Tony Juniper – in charge of the quango responsible for the English countryside. No, Prince Harry, it is absolutely not the job of a minor royal with a fairly low IQ to go round the world – barefoot or otherwise – lecturing people that they are killing the planet largely on the basis of some crap you picked up second hand from your silly old woman of a Dad.

Weird, isn’t it, that when we study Chaucer at school we’re encouraged to have a good old literary laugh at the corruption and credulousness that he was satirising in the Medieval church? For example, we learn that in the Middle Ages it was common for the rich to buy redemption from purgatory and bribe their way into heaven by paying con-men for “indulgences.”

But wait: isn’t this exactly what is happening with carbon offsets? Sir Elton John – bless! – claims it’s really OK for Harry and Princess Meghan to have flown by private jet (their fourth such trip in 11 days) to his South of France palace because he paid for their carbon offsets.

This — as someone joked on Twitter — is like buying your wife a mink coat but then making a donation to PETA.

Meanwhile, in the real world the Day of Reckoning approaches. But it’s not climate extinction that need trouble us – no evidence whatsoever for this; ain’t going to happen. Rather, its the chaos and expense and misery which will inevitably be caused by the hideously counterproductive measures we are taking to ‘combat’ the non-existent problem of climate change.

The blackout that brought parts of Britain to a standstill one day earlier this month is but a taste of things to come.

Why aren’t more people speaking out against this nonsense? Because the penalties for doing so are severe: mockery, ostracism, loss of career. There is even talk of making “climate denialism” a criminal offence.

In short, welcome to the new religion… 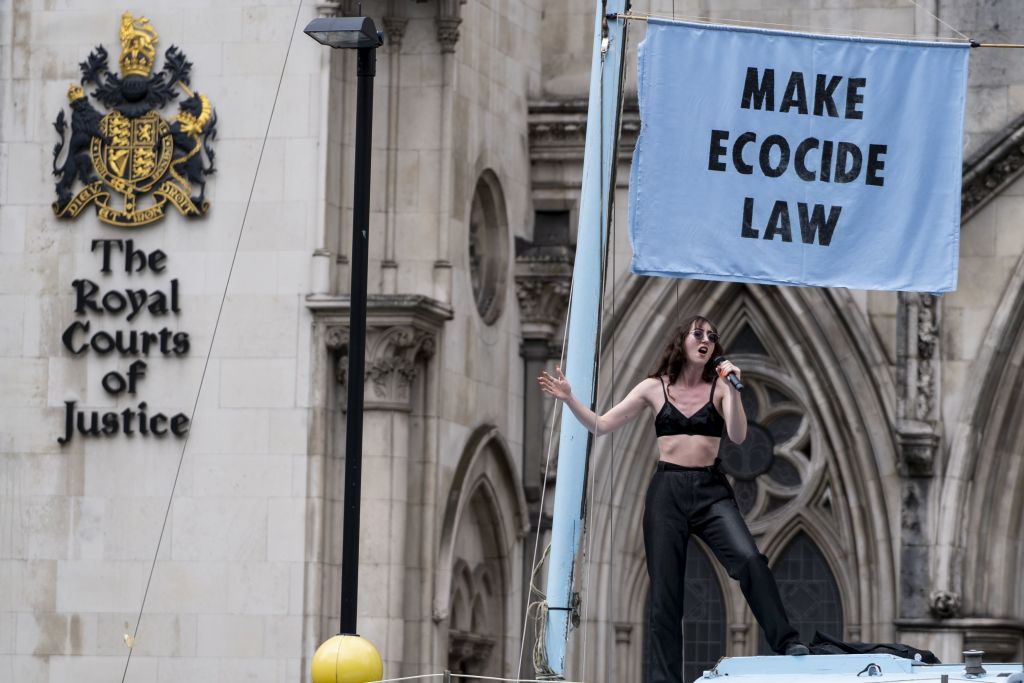 “Extinction Rebellion” climate environmental activist group protesting outside of The Royal Courts of Justice on The Strand in central London in London on July 15, 2019. (Photo by Niklas HALLE’N / AFP)