Britain’s advertising watchdog has reprimanded Burger King for writing they were “selling milkshakes all weekend” after a string of milkshake attacks on right-wing politicians.

McDonald’s had agreed to stop selling milkshakes and other ice cream products in the vicinity of Edinburgh’s Corn Exchange in advance of a Brexit Party rally on May 17th. On the following day, Burger King wrote on social media in a now-deleted tweet: “Dear people of Scotland. We’re selling milkshakes all weekend. Have fun. Love BK #justsaying.” 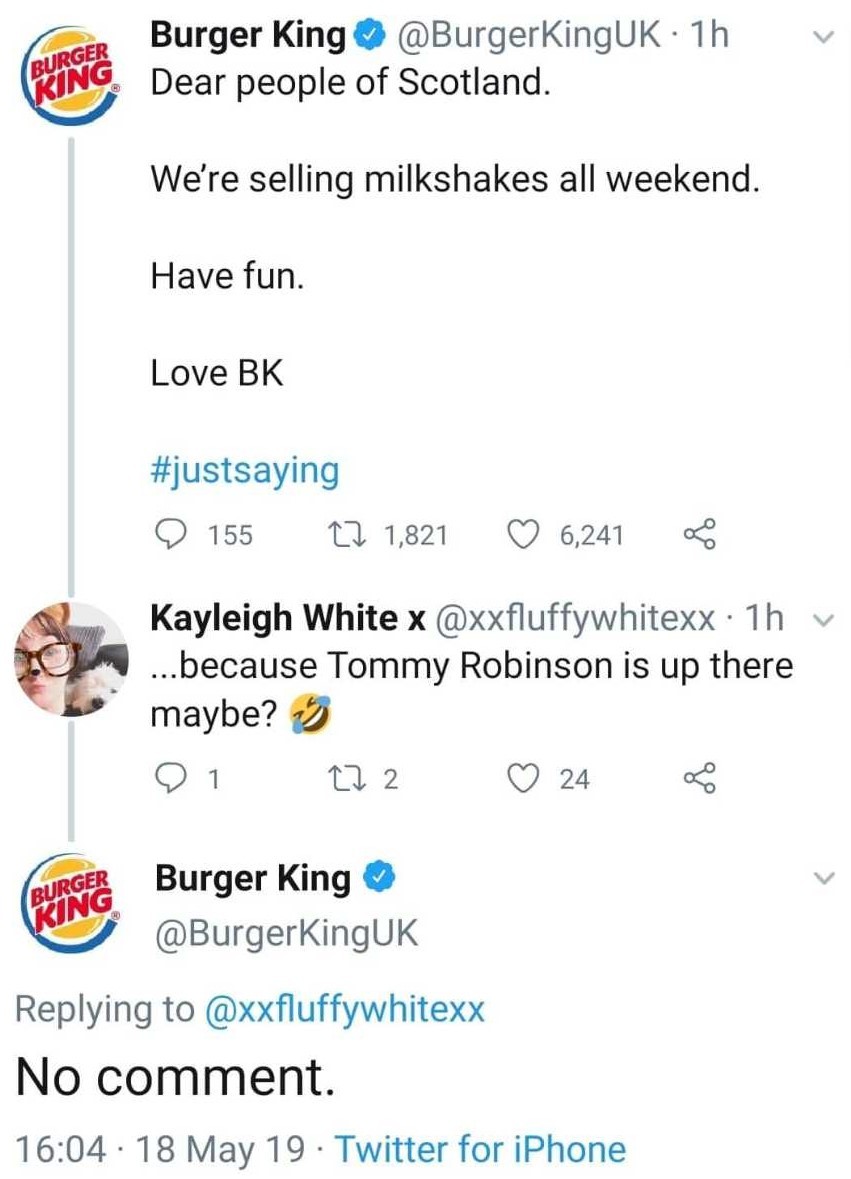 If there was any speculation as to whether the burger joint understood the context of the comment, when one Twitter user asked: “…because Tommy Robinson is up there maybe?” the outlet replied: “No comment.”

On May 20th, a man threw a milkshake at Brexit Party leader Nigel Farage in Newcastle upon Tyne.

The ASA said 24 complainants had challenged whether Burger king’s May 18th advertisement “was irresponsible and offensive” because they believed it “encouraged violence and anti-social behaviour”.

The watchdog upheld those complaints saying that in the context of the previous widely-reported assaults, “the ad was likely to be seen as a reference to the recent incidents of ‘milkshaking’ political figures”.

The ruling stated: “…in the context in which it appeared we considered it would be understood as suggesting that Burger King milkshakes could be used instead by people to ‘milkshake’ Nigel Farage. We considered the ad therefore condoned the previous anti-social behaviour and encouraged further instances. We therefore concluded that the ad was irresponsible.”

Burger King was ordered not to share the ad “again in its current form” and the company must ensure “that its future marketing communications did not condone or encourage anti-social behaviour”.

In response to the spate of milkshaking, comedienne Jo Brand called assaulting someone with milkshakes “pathetic”, joking on BBC radio in mid-June: “… why bother with a milkshake when you could get some battery acid?”

Mr Farage condemned the remarks, saying: “This is incitement of violence and the police need to act.”

London’s Metropolitan police force said it received complaints about the remarks on the grounds they were “incitement to violence”. Scotland Yard later announced that after “considering” the referrals, “no further police action will be taken in relation to this allegation”.

Threats or innuendoes of political violence against right-wingers have increased in recent years. In June, Channel 4 aired a “comedy” programme set in Victorian England where a politician called “Neil Fromage” is shot in the head while giving a speech on immigration.

Last month, British rapper slowthai waved a severed plastic head of Prime Minister Boris Johnson while shouting: “F*** Boris Johnson. F*** everything.” The incident occurred during the Mercury Prize awards ceremony at the Eventim Apollo in London and was live-streamed on the BBC.

The leftist stunt was reminiscent of American comedienne Kathy Griffin posing for a picture while holding up a bloodied plastic head of President Donald J. Trump.