Did Burger King appear to endorse political violence by hinting to its Twitter followers that it is perfectly OK to assault with milkshakes campaigners whose politics you don’t like?

The supposedly witty tweet seems to be an opportunistic response to a story that police in Scotland asked a local branch of McDonald’s not to sell milkshakes during a rally at Edinburgh’s Corn Exchange by Nigel Farage’s Brexit Party.

This was prompted by a spate of milkshake attacks on pro-Brexit campaigners — two on Tommy Robinson (who is standing in the North-East as an Independent), one on Carl Benjamin (aka Sargon of Akkad, who is standing in the South-West for UKIP) and, most recently, one on an SDP stall in Peterborough.

Asked, albeit mistakenly, if they were making a point of telling Scots they’re still selling milkshakes “because Tommy Robinson is up there”, Burger King offered a less than exculpatory “No comment.” 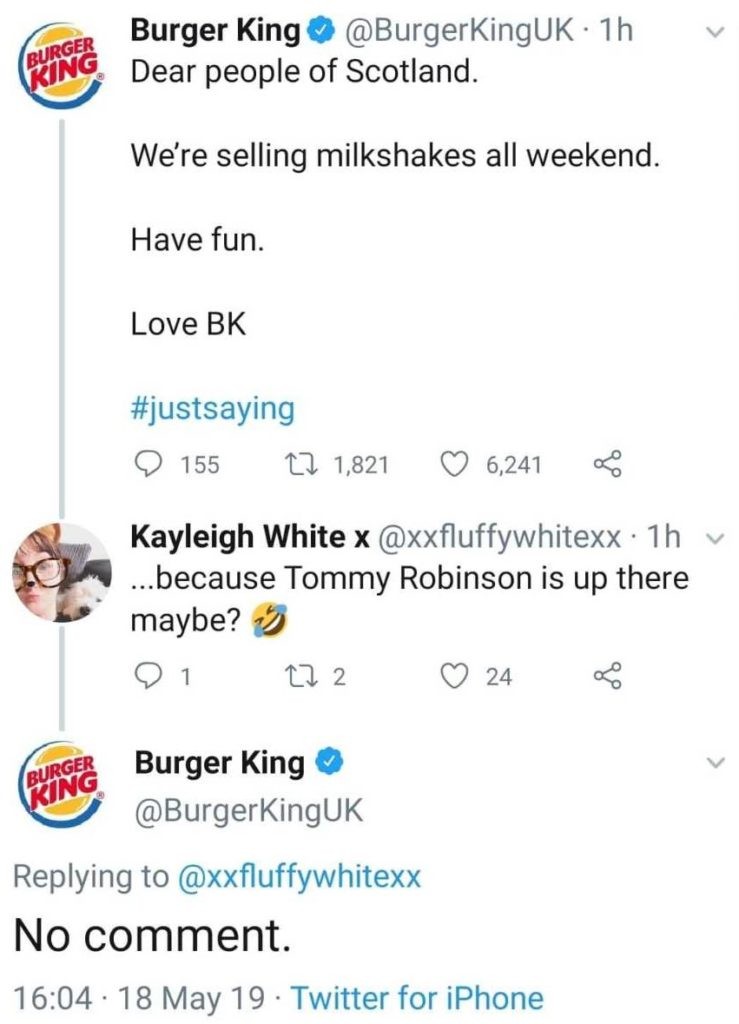 Only hours later, once the backlash had set in, did they claim they would “never endorse violence – or wasting our delicious milkshakes!”

Perhaps this is why all the comments in favour of Burger King’s initial, oh so hilarious tweet come from people on the side of the argument who think violence is an acceptable punishment for the kind of racist, ignorant Untermenschen who voted Leave: from embittered, malevolent, intolerant Remainers, in other words.

Time to "Lactose an intolerant"?

You should also do a range of half bricks.

For details of the origins of the milkshake attack phenomenon, here’s a thread by Nick Monroe. It began on May 1st with an attack by an Islamist on Tommy Robinson and escalated from there:

Ok. So. This "milkshake" stuff. I'm talking about the general escalation of political confrontations that has been waged by the far-left these past few weeks.

Well, this HuffPost article adds it in at the end of describing Tommy Robinson on the campaign trail. pic.twitter.com/GuYZeRMJvH

What’s clear — to repeat — is that this is a problem confined to the far-left (and its anti-Brexit and Islamofascist sympathisers). So what Burger King was doing with that tweet was appearing to throw in its lot with some of the most aggressive, violent and anti-democratic fringes in British politics.

Perhaps, at some stage, someone in corporate HQ will wonder whether it’s really such a good look for Burger King to appear to be taking such an explicit political stance.

It would be nice to think, though, that however many new customers Burger King won over by doing a Nike, it will have lost at least ten times as many seriously pissed off Brexit voters, Farage supporters, and Tommy Robinson fans who’ll never wish to darken its doors again.

It’s the last time I’m venturing near a Burger King, that’s for sure.

Not that I would have done anyway in all likelihood. Their burgers seem as dodgy as their politics.