Left-wing Welsh separatists Plaid Cymru have been embarrassed after the niqab-clad Muslim who starred in their election broadcast was linked to antisemitic posts on social media.

Party activist Sahar Al-Faifi was front and centre in a full face veil in the broadcast for the notionally nationalist Welsh separatist party, which wants to transform the small country into a “nation of sanctuary” for migrants.

Featuring Al-Faifi’s almost entirely concealed and apparently scowling face alongside the slogan “Wales, it’s us” in a now-deleted tweet, Plaid Cymru may have been trying to provoke the backlash which followed, giving them an opportunity to respond to critical social media posts with a declaration that “We stand with Sahar and all Muslim people in Wales and beyond” and that “abusive Islamophobic responses [are] unacceptable and will not be tolerated.”

The separatists may now be regretting using her to burnish their multiculturalist credentials, however, as they have now had to suspend her pending an investigation after a long history of allegedly antisemitic social media activity was uncovered, the BBC reports. 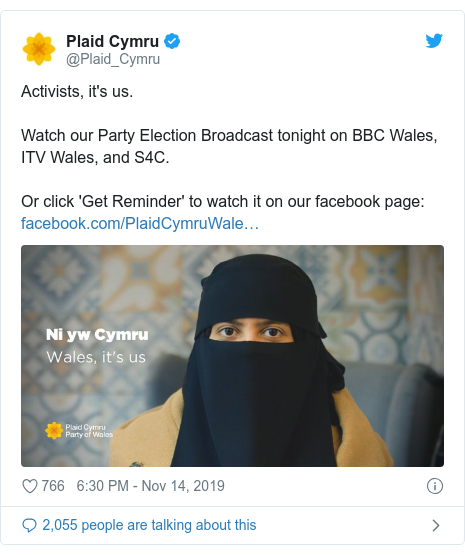 Curiously, the publicly-funded broadcasting corporation opted not to quote any of the posts that led to Al-Faifi’s suspension, leaving readers in the dark about what was actually said.

Social media users are circulating images which they claim are screenshots of her posts, however.

Many of the alleged tweets centre on whether or not the Jewish people have the right to state of their own in the Holy Land, with Al-Faifi — a molecular geneticist by trade — appearing to speculate on whether the “Zionist Ashkenazi” really have blood ties to the land, and the impact which genetic research into their heritage might have on “the Rothschild Jews and their branches in Palestine”.

One of the alleged tweets appears to show Al-Faifi in a state of elation over rocket attacks against Jewish Israelis, exclaiming: “Zionists ran away since the first rocket fell! YOU KNOW WHY? Because it is not their land! They do not know HOW to die for it”.

Still another alleged tweet appears to show her calling on Saudi Arabia to wage economic war on the West, saying: “If Saudi Arabia stopped producing oil for one day, the West would kneel on their knees [sic] & #Israel would disappear. Shame on Arab rulers!”

Al-Faifi was reported to be the South Wales and West England regional manager for Muslim Engagement and Development (MEND) in late 2017 by the Jewish Chronicle, which highlighted comments she made appearing to blame deadly radical Islamic terror attacks in London on “pro-Zionists pro-war individuals [sic] such as Robert Rosenkranz, Lord Ashcroft and Lord Kalms the owner of Dixons” who she claimed “make money from wars”.