Christmas is a time for tradition — bringing a tree into the house, midnight mass, giving gifts… and being repeatedly encouraged to cheat on your husband by a respected, small-c conservative national newspaper.

This is a tradition in the sense that 2019 is the second festive season in a row where British broadsheet newspaper the Daily Telegraph — which enjoys a strong legacy reputation as being the standard-bearer for the intelligent, conservative right in the United Kingdom — has bombarded its male social media followers with messages to encourage their wives to cheat on them as a Christmas present.

The December 2018 article Why men should give their wives a cheat pass this Christmas was ridiculed on social media when it was first published over a year ago as being so apparently totally out of character with the newspaper. Essentially an extended advertisement for a book whose author’s quotes on freeing women from their husbands makes up the majority of the copy, the article also cites societal decline as proof of the central thesis of the work.

Martin, whose 2015 book Primates of Park Avenue: A Memoir became a New York Times bestseller, is not alone in her espousal of such ideas. This year has seen, if not an explosion, then at least a creeping insinuation into our culture of the idea that monogamy might not be the only approach to long-term relationships… Meanwhile we’ve had an MP, Labour’s Jess Phillips, recommending that schoolgirls should be taught about orgasms.

Perhaps the most mystifying thing about Why men should give their wives a cheat pass this Christmas is the Telegraph’s loyal and dogged promotion of it, apparently out of all proportion for a humble book-plug and of all times, especially around Christmas. Having originally fired this ode to polyamory into the Twittersphere on December 7th 2018, the experiment was repeated again on December 11th of that year. 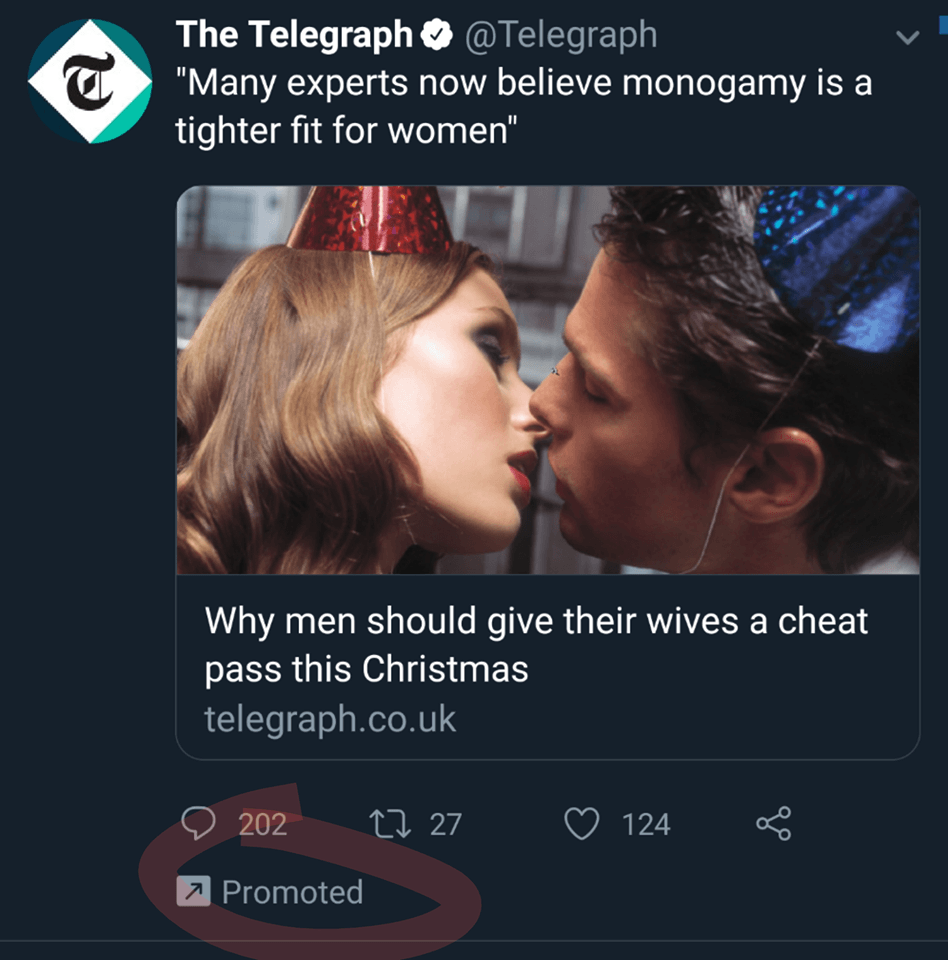 Perhaps someone higher up the food chain at the newspaper noticed and asked whether they might be able to Tweet something else instead.

That’s not to mention, of course, the several times the article has cropped up on the Telegraph’s Facebook page, too. And the fact several of the Tweets have been ‘promoted’ on the platform, meaning the Telegraph paid Twitter to make sure as many people could see the article as possible.

Breitbart London approached the Daily Telegraph for comment on this story but they declined to respond.